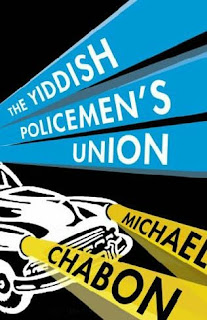 In The Yiddish Policemen's Union, Michael Chabon has set himself a lot of plates to keep spinning. This is book is: a noir murder mystery, an alternate history, and a character drama (at least). This being Chabon we're talking about, he keeps everything in the air with wit and style.

Let's take the murder mystery first. A Jew going by the alias Emmanuel Lasker has been shot in the flophouse hotel that is also the residence of our protagonist, Detective Meyer Landsman. Lasker was a chess fanatic and a heroin user, but beyond that he's an enigma. Landsman is a predictably down-on-his-luck detective, but some of the reasons for that stem from the alternate history aspect of the story, not just from his alcoholism and his divorce. As many characters in the story point out, these are strange times to be a Jew (about which more later). Landsman sees in the Lasker case another chance to chase redemption before the tide of uncertainty completely engulfs his life. Along with his cousin and partner Berko (the relatively sane one of the pair, married with two children and another one on the way), they start tracking down Lasker's identity. They start with the chess-playing community, but are quickly led to the city's main criminal gang of orthodox Jews. The plot, of course, thickens. This is especially true when they are told to "clean up" all their outstanding investigations—don't bother solving them, just file them away.

This all has to do with the alternate history part of the story. The initial point of difference with our world is that in the book, the representative to the US government from the territory of Alaska was run over by a taxi in the 1940s. With his opposition removed, the government went ahead with a plan to settle European Jewish refugees from WWII (then just starting) in an "uninhabited" region of Alaska ("uninhabited" except for a bunch of pissed off Tlingit Indians, of course). In this universe the attempt to create Israel in 1948 was thwarted, and so Jews, mostly from Europe, have congregated in the "Federal District of Sitka," mostly in the "big city," Sitka. Unfortunately, the original plan was not a land grant, it was a lease, and the lease is up on Jan. 1, 2008. The story is set in November of 2007, and no one is sure what will happen on New Year's Day. Laws against Jews are much more prevalent in this universe than ours; most countries won't accept any Jewish immigrants unless they have family to live with. No one is sure if the USA will let them stay where they are. Some people are leaving for Madagascar, or finding long-lost families in New Jersey, or considering another try at invading the Holy Land, or, like Landsman, sticking their heads in the sand and hoping it will turn out OK.

It's in this context that the police force is being ordered to start closing things down, quietly, with a minimum of fuss. No investigations needed; who will care in two months anyway? Especially about some no-name Jewish smack addict. Well, Landsman cares. And here we get into the character drama. Landsman is carrying around huge amounts of guilt, which he drowns with work and alcohol. He's a first-rate detective, but with the prospect of losing his job he's even more unstable than usual. It doesn't help that his ex-wife has been reassigned to be the one to close down the department—for the next two months she's his nominal boss. Awkward. As he investigates the murder (and finds himself caught up in events much bigger than he had counted on), he also has to delve into his family history and his history with his wife, whom he obviously still loves.

My synopsis all sounds very serious, but this book is also funny. Truly serious books wouldn't allow their hero to break out of a jail/rehab center wearing only his undies, brain a guy with a cot that he's chained to, then going running through the snowy forest (still sans clothes) only to be shot at by Jewish cowboys in golf carts until being rescued by a Native American dwarf detective. Seriously. Along with his humorous set-pieces, the story is also imbued with the sarcastic black humor inherent in Yiddish culture (unlike our Israel, which speaks Hebrew, Sitka's dominant language is Yiddish). (Be aware that if the Yiddish words he throws in are confusing you, there is a glossary in the back of the book.) Combine that with Chabon's own unique prose style, especially his love of similes:

"When there is crime to fight, Landsman tears around Sitka like a man with his pant leg caught on a rocket. It's like there's a film score playing behind him, heavy on the castanets. The problem comes in the hours when he isn't working, when his thoughts start blowing out the open window of his brain like pages from a blotter. Sometimes it takes a heavy paperweight to pin them down."

Chabon is never anything less than a joy to read.

This is the second of this year's Hugo novel nominees that I've read. (I'd better get cracking, the deadline is July 7th. Luckily I've already read all the short fiction except for five of them, so it'll be easy to catch up there.) So between Rollback by Robert J. Sawyer and this, how can one even begin to judge? Rollback has some wonderful extrapolative near-future sf, always delightful, often moving. Policemen's Union has great world building combined with an interesting plot, amazing prose, and character drama that develops without slowing down the plot. So far, I'd have to rate this above Rollback, but it just goes to show how difficult it is to compare gorgeous apples to delicious oranges.