Adventure Out Around Saturn 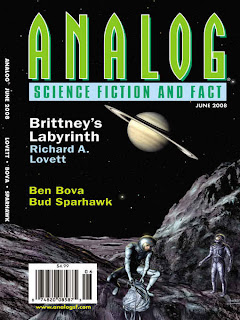 Hugo Gernsback and John W. Campbell both believed that science fiction should be: a) educational, b) entertaining, and c) inspirational. (Notice the lack of "good" or "literary" in that line-up.) Richard A. Lovett's story in June's Analog, "Brittney's Labyrinth," follows that prescription to a T.

Having been rescued from a tight spot in June 2007's "Sands of Titan," Brittney and Joe are at loose ends. Joe is just a regular guy, a spacer working out around Saturn. Brittney is the AI that spontaneously gained sentience during the last story, and lives in some chips implanted in Joe, making them effectively a cyborg. Brittney is the narrator; Joe is a man of few words.

They're engaged by a rich speculator to guide him on some exploratory work on the moon Iapetus and in Saturn's ring system. Brittney can't quite figure what his angle is: rich idiot out to make a name as an explorer (there are frequent references to British polar explorer Ernest Shackleton), prospector, thrill seeker, other? Joe doesn't seem to care—he spends most of the story silently wrestling his own demons without communicating much to Brittney.

They do find out what the rich guy is up to (it unsurprisingly turns out to be sinister—he may as well have had a pencil-thin mustache, been wringing his hands and chortling the whole time) and Brittney and Joe also make progress upon the delicate path of learning to co-exist. It doesn't strike the strongest-ever blow for AI rights, but it's a start.

However, there's an extent to which all that is besides the point. The real point is: Look, Saturn! And its moons! And its rings! And all the things that might be out there! Isn't that cool?

And by gum, it is pretty darn cool. Lovett's enthusiasm for solar system science is infectious. He incorporates all the latest information from probes such as Cassini and Huygens, and throws in a lot of informed speculation. His description of looking out at Saturn and the surface of Iapetus from atop the moon's mountainous ridges is exactly the sort of amazing imagery that makes you want to get there yourself, even if you have to invent a way to do it. It's exactly the sort of inspirational view that Gernsback and Campbell hoped would inspire the next generation of engineers to get us that much closer to making it a reality. Let's hope it still will.
Posted by Karen Burnham at 08:00

You are absolutely correct. Science fiction as seen by Hugo had to be a great read and incorporate real science. The real science part is much easier today, the fiction part keeps getting harder as science keeps on outstripping fiction,

I was hired by Hugo in 1956 as an assistant editor of Radio-Electronics Magazine. And went on working for the family until I acquired ownership of Gernsback Publications. We closed down operations in 2002.

I’ve recently published a new 900-page biography about the life and times of Hugo Gernsback. It is available on Amazon. Just follow this link:

The manuscript was found while I was in the process of closing down Gernsback Publications Inc. in 2003. It was apparently written some time in the 1950’s. It covers all the areas that Hugo found interesting: wireless communications, science fiction, publishing, patents, foretelling the future, and much more.

Thanks for stopping by! Your book sounds interesting. I couldn't tell though, is it a biography or an edited autobiography?