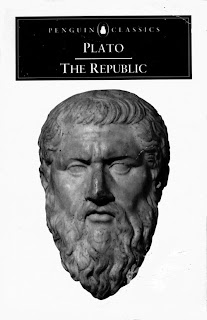 I'm still having fun reading the ancient Greeks. I'm about a third of the way through Thucydides, so I've been learning a lot about ancient warfare, and modern and ancient rhetoric. When it comes to war and politics, I think my favorite thing about the classical Greeks is their deep and abiding cynicism.
Which brings me to Plato's Republic. It provides one of the early selections in the Norton Anthology of Theory & Criticism that I've also been working through at odd hours. I remember reading the Republic for the first time, and thinking that when Socrates (or Plato) talked about literature, he must have been having a little fun at the expense of his interlocutor. After all, he proposes throwing out huge amounts of literature that we consider treasures of the Western world, including large chunks of Homer. Considering that even back then Homeric poetry was revered, I thought he must have had his tongue at least partly in cheek.
Coming across these arguments again in the Norton Anthology, I'm trying to give them their due. But is there any reason not to throw out all of his points? Is there any value in insisting that fiction literature be only upstanding, moral, virtuous, and educational; encouraging only right behavior and never giving examples of wrong action? I understand that there are probably still some folks who think this way--and any form of entertainment aimed at children will always be under a lot more scrutiny (see the cyclic uproars about: rap lyrics, video games, LGBT-positive children's stories, etc). But it seems both futile & silly.
Reading some of the Great Classics of Western Literature, I've noticed that some of them, especially those stemming from the oral tradition, probably survived partly because of their appeal to children. And in the same way that kids can watch a funny car-crash scene from Toy Story 2 twenty times in succession without any diminishing enjoyment, I can imagine some child from 2000 years ago saying "Tell it again, tell it again, Grandpa! Tell how the hero hit the bad guy so hard that his EYES flew out!" (from the Iliad). Or 1000 years ago: "Tell how Beowulf tore the monster's ARM off and BEAT him with it!" And let's not even get started on the Canterbury Tales. If you applied Socrates' standard to all literature, you'd have to throw out so much of what we now consider classic. Midsummer Night's Dream--gone!
Is there any defense of this approach today, or can I put it out of my mind? I don't want to dismiss it out of hand if there's something I'm missing, but I can't see it having much value in my own approach to literary criticism.
When it comes to the Norton Anthology, I'm looking forward to getting into Aristotle, who comes next. I haven't read Poetics or On Rhetoric before, and suspect that I'll find something that, if not more useful, will at least be new (to me).
Posted by Karen Burnham at 19:56 No comments:

OK, some of you may have noticed that I've been mentioning that I may not be able to travel to WorldCon or WorldFantasy this year. That's pretty much confirmed at this point, and here's why: 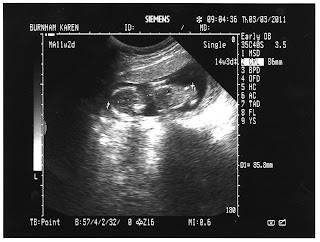 Curtis and I are expecting our first baby! It's due smack in the middle of Con season, with an ETA of August 28th. Needless to say, we are hugely excited!

The picture above is from the first ultrasound I had last week, where they estimated the little one is about 14 weeks along. I got to see it wiggling around, and we confirmed 2 arms, 2 legs, and 0 tentacles.

Now, I don't want Spiral Galaxy to become a baby blog--so of course I started a separate baby blog. For anyone who wants to follow what's going on in Curtis' and my expanding family (and see more pics), you can check out our new family blog. Spiral Galaxy should continue on uninterrupted.

Of course, babies throw a huge wrench into planning. It's easy to say that we will skip out on WorldCon and WorldFantasy this year. But what I can't predict is how much impact there will be on the rest of my activities: editing the Locus blog, reviewing for folks, and writing a book. The little one should be about 6 months old when my Greg Egan manuscript is due--how the heck is that going to work? I'll be trying to keep up with everything as long as I can, and with luck I'll be able to bow out of things gracefully when I start to get overwhelmed.

Speaking of grace: it turns out I've been pregnant since Mid-December, and I found out in mid-January. For those of you who got over-sharing, over-emo, or over-sensitive emails in that time, I most sincerely apologize. I've been cranking my internal censor up since I found out, and I'm trying to prevent that sort of thing from happening again. ::sheepish grin::
Posted by Karen Burnham at 10:59 3 comments: