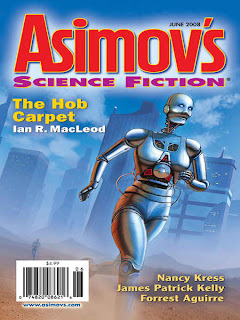 "Beneath Sunlit Shallows" by Derek Kunsken asks an interesting question: how much suffering should we ask an individual to tolerate in the name of species survival? In order to set up this question he writes a conventional sf story, but twists it in interesting ways.

The main character is Vincent, a miserable scientist. He has been genetically engineered to live in the depths of an alien ocean. However, while his physical form is suitable for his environment, none of his mental instincts are. He can digest the crud they scrape off the ocean floor, but he finds it disgusting. He's sexually attracted to some vague idea of two legs that he's never actually seen—his own kind are ugly and repellent to him.

Vincent spent a lot of time thinking about the people whose decisions had, generation after generation, put him at the bottom of the ocean of the world they'd named Indi's Tear. He could not sum the series of seemingly well-intentioned choices with a result he clearly considered immoral. Where was the breakdown?

It turns out that Vincent is the latest product of a singularly ill-fated extra-solar colonization attempt. At each step the colonists chose to do whatever it took to survive. The planet they intended to colonize was struck by a Moon-size object as they approached the system. They didn't have the fuel to go look for another home. They took up orbit around another planet in the system, but the debris from the gigantic impact started punching holes in the ship. They moved down to the planet with a barely breathable atmosphere and three gravities. They engineered themselves to live in the coastal shallows, much like seals, but they still worry about gigantic meteor impacts. They've engineered Vincent and his siblings to live at the bottom of the ocean, protected from the threats. However, the engineering is only barely workable: 47 of his 50 litter mates died, leaving only himself and two others, with every waking moment a misery.

The main question here revolves around his thoughts about suicide. He is one of the most brilliant minds that the colonists have yet produced: he is intrinsically valuable for his problem-solving ability, but his genes are also valuable. However, at the beginning of the story he has destroyed all of his stored genetic material; he doesn't want to be culpable for bringing more miserable creatures into this existence.

Now another large asteroid is heading for the surface, and he's got to decide. Can he commit suicide when it means that the colony will suffer and possibly fail? Should he be forced to live every day in abject misery simply to propagate 'human' survival on this one rock? The author makes it clear what his choice is, but leaves a lot of ambiguity in the mind of the reader as to whether or not that choice is the "right" one, or whether there is a "right" choice.

This story reminded me of Olaf Stapledon's Last and First Men. He described many times when humanity had to transition from one evolutionary phase to another in order to ensure the survival of mankind. However, he was writing from such a high historical perspective, he never stopped to describe the human suffering that such transition periods might engender. This short story is like an expansion of one sentence in a Stapledon narrative. Possibly if Vincent had read Last and First Men or Starmaker, he might have felt as if his suffering could lead to something better. As it is, it leaves an important ethical question for the reader to ponder.

One quibble: Vincent is the main character but there are two others, his two surviving litter mates. One is bright but less brilliant than Vincent, and the other is described as being quite dull. Guess which one is the girl. Would the story change in any appreciable way if the other smart person was the girl instead of the guy? Not that I can think of. With actual sex or attraction between two members of this gengineered species off the table, the dialog wouldn't even be different. Why reinforce the "girls suck at science" stereotype? This point is obviously incidental to the philosophical thrust of the story, but it still irritates.