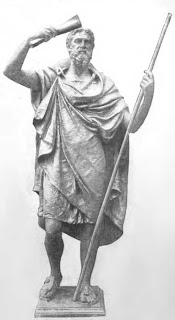 It took 10 months of reading (between everything else I review here), but I've finished Herodotus' Histories!

I've been on a classics kick for the last year and a half or so, working my way through the publicly available syllabus of St. John's College. It's a four-year program that offers a liberal arts degree through reading the Great Works of the Western Canon. (I'm up to Oct. 15th of the first semester!) While I disagree with narrowing one's focus this way (if nothing else it disregards everything written by people south of the Mediterranean--no Sinbad or Arabian Nights--everything from Asia--no Lao Tzu or Confucius--and everything from oral cultures), I can't argue that all these works are worth reading.

I was turned onto this program by John C. Wright. I love his books, especially his Golden Age trilogy, but when I read his Livejournal I find myself disagreeing with almost every word he types, sometimes including 'and' and 'the.' He's a product of this college, and I thought it would be interesting to see if, by reading the same works, I came to the same conclusions that he has. So far, not so much.

I haven't been reviewing these things here; I don't feel worthy of reviewing classics like these. I can only meditate upon them, really. That said here are some thoughts from my reading:

So those are some of my thoughts from the last 10 months. I'm very glad I read this, and read it cover to cover (the St. John's syllabus only reads brief selections from the first few books, I think they're missing some of the really fun bits).

Onwards to Plato's Republic!
Posted by Karen Burnham at 21:27