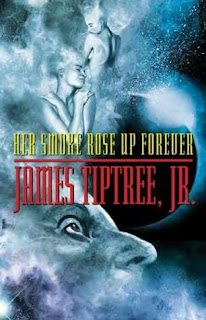 Taking a break from the contemporary for a moment, let's talk about James Tiptree Jr.'s "The Girl Who Was Plugged In," originally published in 1973. Over the past two years I've learned a lot about Tiptree, although I haven't yet delved deeply into her fiction. I read the rightfully acclaimed biography by Julie Phillips. As I've been reading about sf criticism, I've learned a lot about Tiptree's thematic content and politics. For instance, many of her short stories have been analyzed by feminist and queer theoreticians. "Plugged In," "Houston, Houston, Do You Read?" and "The Women Men Don't See" are probably the three that are mentioned most frequently in books on literary criticism. It makes sense: Tiptree, a woman writing under a male pseudonym, is herself a perfect example of queer theory. She is a textbook case study for gender as performance, given how long she convinced her many correspondents of her masculinity. In regards to "The Girl Who Was Plugged In," I feel like its different thematic facets have been admirably and exhaustively covered. It's feminist, cyborg, queer, performative and pre-cyberpunk. Above all, it's good.

However, I'd like to talk about something that I hadn't seen mentioned in all the synopses of it that I've read, and that surprised me when I finally read the story myself: the narrator of this story is really pissed off at the audience.

Listen, Zombie. Believe me. What I could tell you—you with your silly hands leaking sweat on your growth-stocks portfolio. One-ten lousy hacks of AT&T on twenty-point margin and you think you're Evel Knievel. AT&T? You doubleknit dummy, how I'd love to show you something.

After that berating opening, she introduces the main character, the ugly girl worshiping celebrity beauty. She'll go on to be one of those beauties herself, but it will cost her soul and eventually her life. Anyway, Tiptree introduces this girl and then assumes that we won't care about her:

But you're curious about the city? So ordinary after all, in the FUTURE?

Ah, there's plenty to swing with here—and it's not all that _far_ in the future, dad. But pass the sci-fi stuff for now, like for instance the holovision technology that's put TV and radio in museums.... We're watching that girl.

I'll give you just one goodie. Maybe you noticed on the sportshow or the streets? No commercials. No ads.

That's right. NO ADS. An eyeballer for you.... How does that finger you?

Think about it. That girl is still sitting there.

The narrator assumes that all the readers will care about are the sci-fi trappings, the world building, and she's pretty pissed off that they (we) would be ignoring the girl at the center of the story.

This tone continues through most of the story, although it fades to the background when the plot is moving forward. It comes back at the end in full force. After relating the tragic end of the girl, the narrator portrays how the characters and corporations in the story continue to profit from the same exploitation that caused the tragedy. Then she highlights the complicity of her readership in that exploitive, oppressive system in the final paragraph:

Believe it, zombie. When I say growth, I mean growth. Capital appreciation. You can stop sweating. There's a great future there.

I've heard some older sf readers (in particular my parents) say that they loved sf through the 40s and 50s, then dropped it when the New Wave came in. I wonder if this sort of blaming, condescending narration could account for some of those drops. After all, if the author doesn't think the reader is worthy to read the story, why should they?

This is not to say that it's bad or wrong: there's value in getting up in people's faces and confronting them with their part in systems you think are wrong. This story deserves the critical attention that it gets; Tiptree was making important points here, well ahead of her time. However, it's understandable that when you confront people with their perceived misdeeds, or accuse sf readers of essentially being mindless sheep, that they won't necessarily appreciate it.

The voice in which this story is written was the first thing I noticed. Though I didn't react against it in the way you have. I think there's a tongue somewhere in the cheek.

The narrator calls us "zombie" and "dear dead Daddy" because he is from the future, so we are dead in his native era. Reread the ending of the story and you will realize which character he is.