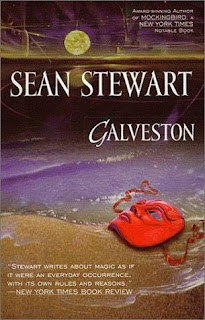 There's a particular thrill that comes from reading about someplace you've been (or going to some place you've read about). At least, there is with fiction. With journalism, you can read about places you know, but likely it's because something bad has happened there. That's not so much fun. But reading about a real place that you know in a work of imagination seems to make it more "real" or adds another dimension to a place in some undefinable way. It's a particular pleasure that one does not get to experience much when one is a genre fan. (It's also a pleasure that led me to visit the Royal Ontario Museum in Toronto. It was a worthwhile visit on many levels, but the *reason* I went was because it's where aliens made first contact in Robert J. Sawyer's Calculating God.) So many of our stories take place in outer space, or on other planets, or in vaguely European medieval landscapes with made-up names. So I'd like to thank Gary Wolfe for recommending Galveston to me when he heard I was moving to Houston. I live almost exactly halfway between Houston and Galveston now, and I've been to the island a couple of times. Galveston is very definitely a work of fantasy, but it's also a completely grounded book, being rooted in a real place and an (almost) real time.

In 2004 (the book came out in 2000) magic broke into the world. It was Mardi Gras, which is as big a deal in Galveston as it is in New Orleans. The Krewes (community organizations who run floats in the big Mardi Gras celebrations, among other things—something I was totally unfamiliar with before moving here) saw what was happening and were able to ride the wave of magic, shaping it in less catastrophically destructive ways. Powered by strong emotions, some places were a complete loss, such as the UTMB (University of Texas Medical Branch) hospital (actually, one of my neighbors works there). Many people died outright, killed by magic overload or by the creatures spawned from nightmares. Two women took control and were able to create a wall between the "real" world and the magic world.

Fast forward about 25 years. The women who have patrolled the border between the real and the magic and led the community through the times of deprivation are aging. A generation has grown up now who know nothing of the world before the Flood. The two main characters of the story are emblematic of this second generation. Sean Stewart merely sketches in the first dramatic part of the crisis of the Flood, the part where individuals take charge and lead the community through the immediate crisis. He instead focuses on the secondary dramatic point: how will the next generation build upon what the first achieved? Will the systems put in place be sustainable, or will it devolve into anarchy once the founders of the system are gone?

The answer to that question lies in the growth potential of two less-than-promising young folks. Sloane Gardner is the daughter of Jane Gardner, who became the effective civil authority after the Flood. Jane has been trying to groom Sloane to become her successor, but Sloane, while trying very hard, finds nothing of interest in community meetings and factional negotiations. She's a people person, doing well at the mingling and nudging side of things, but completely failing to be ready to take the reins of power. Her mother is slowly dying of Parkinson's disease, and the generational hand-over crisis is nearing.

Josh Cane is the son of a gambler and a pharmacist. Mostly raised by his mother the pharmacist, he's become the neighborhood medicine man and herbalist as all the real medicines have gradually run out. He used to run in the same high society as the Gardeners, but his father's gambling finally ruined them. He lives in the barrio now, and resents every minute of it. He's obsessive, intelligent, competent, and anti-social. In most genre fiction, that would be enough for him to triumph—we all perhaps lack some of the social graces, and hope that our raw intelligence and competence will make up for it. However, there are consequences for being disliked, and Josh runs into them hard.

The upshot of all this is that Sloane rebels against her mother and disappears into Mardi Gras, the magic side of the island, while her mother dies. Her trajectory clearly follows that of a drug user: running away, having fun, being violated and left in a gutter. Ultimately she has to seek redemption, incorporating her new self and perspective with a rejection of total selfishness and hedonism. While she is gone, Josh is accused of murdering her. He and his best friend get banished to the mainland, where they have to contend with wildlife, a hurricane, cannibals, and each other. Josh likewise hits an all time low and must seek redemption. He has to integrate himself into human society, learn a little empathy and tact, and stop focusing on what he doesn't have and do the best he can with what he does have.

Damn, I've made this all sound trite and self-helpy. It's not at all. It's intense and dramatic and often funny. Josh's friend Ham is nine kinds of awesome, and when Ham finally smacks Josh around we really understand why. Likewise, while Sloane's journey could devolve into maudlin melodrama, instead it picks itself up in a practical way, gets with the plot and drives forward.

At the end of the book everything has changed: Josh, Sloane, and especially Galveston itself. The boundary between the real and the magic is dissolving, and reintegration has to take place all around. Stewart has a good feel for place and for people. While all of this crazy stuff is going on, the people inhabiting this universe seem totally solid, even the ones with issues. This isn't a subtle character piece where nothing gets resolved; in this book people's character defects really matter. People's lives depend on the main characters' ability to get their acts together. Sometimes they do and sometimes they don't, and the narrative draws you through every step of the way.