Today I have a new review up at SFSignal, this one is for Zoran Živković's The Bridge. It's a flat-out surrealist novel, and as I say in my "Bottom Line:"

Also, make sure not to miss the International-flavored Mind Melds at SFSignal! The first one was up last Wednesday, the second one will be up July 1, and we'll have a third up the week after that. I've been working hard at sending out invites and putting together all the responses. It's been wonderful to work with and hear from writers, translators, and fans from all over the world. It's been a ton more work than your average Mind Meld, but I'm really proud of how it is coming out.

Before I go, let me pass along this information about WorldCon:

There will indeed be a writers' workshop at Anticipation 2009, Worldcon in Montreal this August.

Entry fee is $20 plus $2.58 in taxes, Canadian. This cost is to defray costs of the workshop. You pay the fee when you're notified that you have a slot and not before. Instructions will be emailed to entrants directly.

There are a limited number of slots available and right now, it's one slot per customer, no multiple submissions.

Maximum length is 10,000 words, including any synopsis of the rest of a novel, novella, etc. Shorter lengths, including flash, are fine, even encouraged, but only one story.

Genre: science fiction, fantasy, horror, the usual for a Worldcon
Type: short story or novel excerpt
Language: English or French
We will also consider entries for critique of non-fiction critical essays on the subject of genre, same length requirements.

The entries will be distributed in advance so the window to get space in the workshop won't be open for very long.

Please link to this post or repost the information, even if you're not going to Worldcon this year. Someone on your f-list might be going and might have a story to be critiqued. Official details will be forthcoming on the website and other avenues of communication.

Let me draw your attention to: We will also consider entries for critique of non-fiction critical essays on the subject of genre... How often do critics and scholars get to workshop their own work? Ideally, book reviews can be well crafted essays with just as much elegance and readability as any short story. I think this is a great opportunity, and I know that several crit/Masterclass folks will be in Montreal around that time. What better chance to meet up and catch up again?
Posted by Karen Burnham at 07:21 No comments:

A Link and Some News

But now the news! As of Monday I will be returning to the ranks of the fully employed. This is a real job, and I will really be working at Johnson Space Center (although not for NASA, for one of their contractors) which is nine kinds of awesome. I'm really excited about working with this group, and I can't wait to get started.

However, this is going to have all kinds of implications. You may have noticed that after a long dry spell (during which I was taking 4 graduate level electrical engineering classes and continuing to do work for SFSignal and Strange Horizons) I've finally been getting reviews posted both here and elsewhere. However, now with my 40+ hour/week commitment elsewhere, that will probably slow down again. Also, next semester I will most likely be taking 2 graduate classes (at night) along with my full-time job; things will likely grind to an almost-complete-halt (again) at that point. It will be worth it, however: if I go that route, I'll only delay finishing my MSEE by one semester, and I'd be done next spring. Over time I'll find a balance between all these different things (and eventually I won't be taking graduate classes anymore), so we'll see how things develop.

Some things are going to have to just get dropped. Unfortunately, one of them is the super-sekrit research project that I had told people about at various times. It was going to have to do with labor-intensive data collection and reader response theory. Because last winter was full of family emergency, and last semester was full of class work and editing work, and now this summer will be full of real full-time work, there's no way I'll be able to do the paperwork and data collection for this. Someday I hope to revive the idea, but I'm afraid for now it is not to be. Still, getting a full-time job, in this economy, working for the manned space flight program, is 100% worth it.
Posted by Karen Burnham at 08:34 No comments: 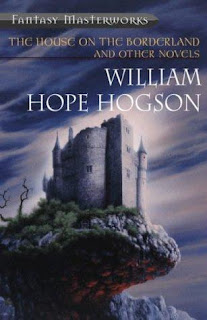 [Before I get started on this I'd like to point your attention to an article of mine that Strange Horizons published this week. In complete contrast to this review, it does some theorizing about contemporary literature that features superheroes.]

House on the Borderland is the sort of thing that people called 'fantasy' before Tolkein came along; i.e., it’s supernatural horror. It's really rather shocking by today's standards: xenophobic only just begins to describe it. I'd heard some things about William Hope Hogson being quite influential over the years, but now I'm hoping that applies more to his story The Night Land, which is currently being mentioned in the context of Greg Bear's City at the End of Time. So I wouldn't necessarily recommend Borderland, but I am planning to continue on to Night Land before too long.

Value judgements aside, what is this book? In the framing narrative, two gents go out fishing to a remote and mysterious (i.e., they haven't been able to find it on any map since) part of Ireland. One day they follow a stream down until they find a massive crater. Sitting on a precipice jutting into the crater are the ruins of a large stone house. The gentlemen investigate the ruins and find the remains of a hand-written book there. They return to their camp and start to read.

The narrative is from the POV of the last owner of that house. He had moved there for the solitude, and had no companions other than his sister and dog. The dog, BTW, is much more interesting and has much more agency than the sister, to give you some feel for the pre-feminist times. Then lots of odd things start to happen. First, the guy has a vivid nightmare. Then a chasm opens up next to the house. Then the house comes under attack for a few nights by pig-men from that nightmare. There's some very vivid writing as the (unnamed) narrator sets up defences against the pig-men siege. After the pig-men seem to permanently retreat (for no adequately explained reason), he goes to investigate the chasm. It begins to flood while he's down there, and he's saved only by his dog. He also manages to save the dog in return, which made me happy.

In an odd choice, there is next some kind of romance with some kind of supernatural female described, but only from 'damaged' portions of the book, so we only get snippets of the narrative. These make no sense at all. Then, the guy is flung forward in time, forced to watch as the world decays, freezes, and falls into the sun. He then goes on an interstellar journey of sorts (ala Stapledon later), possibly sees some things that connect to his first dream, and meets the woman referenced in the romance segments. Unfortunately they can't stay together, and he is flung back to the present day. Then the book more or less trails off.

So what you've got is a lot of plot segments that don't dovetail particularly neatly, and some absolutely shocking xenophobia. Take the pig-men: they're portrayed as 100% menacing and violent. The man doesn't seek to communicate with them or to understand anything about them. They just set about trying to kill one another. Likewise, contrast the time-travel bits with Stapledon: when Stapledonian narrators undertake such a journey, they learn all about humanity, and aliens, and the fate of the universe. Here no such enlightenment comes to the narrator. Here, nothing is ever explained: the chasm, the dreams, the things that are physically real and those that aren’t. Basically, everything that is unknown is scary, with the sole exception of the exotic love-affair that is only sketchily described. And there’s no attempt to make it less scary by seeking to figure it out. At the end, when we return to the framing narrative, even the readers of the man's tale don't quite seem to know what to make of it. I suspect that I’m applying the wrong reading protocols to this book, but I can’t think of any protocol that would make it good from a modern perspective. Probably the horror readers of the day enjoyed it rather more.

There is some strong writing here when Hogson hits his stride, but honestly I wouldn't recommend it to today’s readers. I'll be interested to see if his other two major titles (Night Land and Ghost Pirates) hold up better over time. But that's me! Sorting through the influential classics of the field so you don't have to!

{In a note of contrast, consider my review of Bram Stoker's Dracula, which is about 20 years older. It really drew me in, and seems to hold up much better, especially in terms of style. Although it has its own feminist issues to deal with.}
Posted by Karen Burnham at 16:39 6 comments: