OK, this post is a little off-topic for this blog. However, that's going to become something of the norm around here. I've generally tried to keep Spiral Galaxy as a book reviewing blog, but right now that would mean very infrequent posting. I've got very little time to read right now (other commitments include: working, going to school, working more to make up for the time spent in school, 5-10 hours of homework a week, time spent as a fencing referee, slush reading for Strange Horizons, other management tasks for Strange Horizons, family obligations, general housework, and sleeping) so I've been giving priority to reviews written for SH and SFSignal. But I don't want poor little Spiral Galaxy to waste away entirely, so for the next year or so it will morph into something closer to Karen Burnham's personal blog, instead of being 90% books.

Anyway, in that spirit, let me promote something from my fencing side of life: 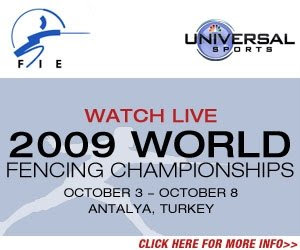 Fencing is often hard to find televised, but now we can get the world championships streamed live on the Internet! Woohoo! Anyway, if you've ever been curious about fencing, this might be something fun to check out.
Posted by Karen Burnham at 12:46 No comments: 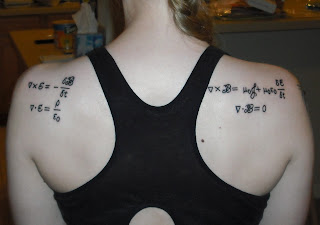 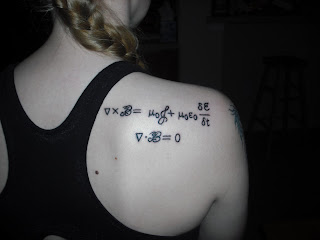 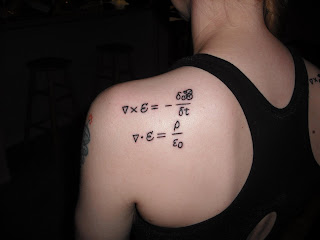 I hope that you'll all recognize those equations more-or-less instantly. If not, be educated here. As I put it to the artist last night: "These are probably the most complicated things I'll ever actually understand."

(That same artist pointed out the awesome symmetry of getting the equations that describe electromagnetism tattooed using a electromagnet, which drives the needle.)

Upon getting back to engineering and E&M specifically, I've remembered how much I loved that part of being a physicist. I'm very lucky that my engineering job also deals with those phenomena to some extent. I was reflecting the other day on how aesthetically beautiful these equations are, and a lot of E&M math tends to be that way. That's when my ideas for my next set of tattoos (which I'd been pondering for about three years) finally fell in to place.

So my plans for my upper back have finally crystalized, and I've started the process of getting my ideas for a more complete back panel into the form of actual art instead of just nebulous concepts. That part will take a little longer, but with any luck will be done by the end of the year.

BTW, in my web-surfing meanderings before getting this tattoo done, I tripped across a science tattoo emporium. Hours of entertainment, and the realization that I'm nowhere near the craziest geek out there followed. Also, relatively few people choose these equations for their tattoos. Much more popular is e^(i(pi)) + 1 = 0. Fair enough.
Posted by Karen Burnham at 19:48 5 comments:

As per my last post, I'm starting in on data collection for my research project. It's a nice, more-or-less relaxing way to pretend I'm doing something productive over my long weekend. [1]

For my first sweep of sf/f short stories, I've been going down the award nominee lists, looking for things under 10,000 words that are available online. I've had no problem identifying lots of sf that is clearly sf: "Exhalation," "Evil Robot Monkey," "Little Lost Robot," etc. Some of these fantasy stories are a little trickier, though.

One story that I'm not sure about is James Patrick Kelley's "Don't Stop." It's a modern day ghost story, focused on character, with perhaps some horror. Does it fit my brief of "core fantasy?"

Also worrying because of how it plunges into horror is the modern day supernatural horror story, "The Button Bin" by Mike Allen. Fantasy, horror, slipstream?

And then there's "26 Monkeys, Also the Abyss" by Kij Johnson. Nothing actually precludes an sf reading of this--the monkeys could be doing extra-dimensional travel that they simply do not deign to explain to us. It doesn't *have* to be magic.

My knee-jerk reaction to all three of these is to say that a drop of fantasy makes it fantasy, but all of them have enough ambiguity that I'm not sure they should be included in the core cluster. So far I'm leaving them out and marking them as interesting test cases for the post-training phase. Opinions?

[1] It's certainly more productive than planning my next tattoo--which I'm pretty sure will happen sooner rather than later, now that I've finalized my plan for my upper back. The final piece finally fell into place over the last week. BWAHAHAHA!
Posted by Karen Burnham at 09:43 2 comments: