Stand on Zanzibar by John Brunner 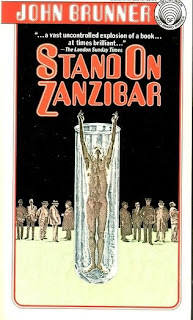 I've been scared of New Wave sf for some time. In my project of reading sf classics I've been adding things from the late 1800s and early 1900s, hoping to delay the inevitable. I read Harlan Ellison's Dangerous Visions when I hardly knew anything about sf beyond the Asimov/Clarke/Heinlein axis. That was a shock, and I didn't get much out of the ground-breaking stories collected there. I had picked up some of the best of that period piecemeal: Left Hand of Darkness and Dispossessed by Le Guin and some Philip K. Dick stories, but generally I've been avoiding it. So when Geoff Ryman assigned Stand on Zanzibar to members of this year's SF Masterclass to read, I was apprehensive. But it's Geoff frickin' Ryman, and if he'd told me to re-read Battlefield Earth (god save me) I would've done it. Now that I've read Zanzibar I'm very glad he recommended it. It;s a fantastic book, much better than I expected. It's interesting for its narrative techniques, its dystopian projections, and in comparing its predicted future to our own present.

The book starts out with a long series of disjointed paragraphs, setting the tone for the future that the story is set in. I didn't find this as off-putting as I expected. There's a lot of made-up slang and jargon, but one can generally piece the meaning together from context. The paragraphs themselves reminded me of Googling—getting tons of snippets of context-free information. He continues through the whole book switching narrative modes: snippets, TV advertisements, excepts from a "Hipster" sociology book, and normal narration. Again, if you trust that it's all going somewhere, this isn't that hard to read. The different pieces each shed additional light onto the future he's built (about which more later).

First, there's the actual story. The plot follows two main characters. Donald Hogan is a white, male "synthesist." He's got what I consider a dream job: he works for the State Dept. reading widely, putting information together, making connections, and letting experts know about useful information they may have missed. That's great until they "activate" him and force-train him as an assassin and send him to infiltrate an Indonesia-like country. That's not so much fun. Norman House is Donald's roommate. He's an African-American VP at mega-company known as GT. He's pretty ambitious, and perfectly aware of the advantages and disadvantages that his race gives him. He becomes involved with a project to improve and exploit the African country of Beninia, a poor but strangely idyllic place that seems to evoke interesting changes in those who live there for any amount of time. At the juncture of the different plots sits Shalmaneser, a super-computer owned by GT. Both GT and the State Dept. use its processing power to run simulations and make predictions about the best courses of action, and when it gets confused everything could go to hell.

There are a few key things that impressed me about this book. After reading so much older sf, the fact that Zanzibar is keenly aware of race, class, and countries other than those in Europe is particularly refreshing. It has a global perspective that I still find lacking in a lot of contemporary sf. Also, Brunner gets some of his extrapolation right on the money: an information-drenched world where knowledge is power, the ubiquity of advertising and communications, and the improvement in race and gender relations. That's a pretty good track record. However, the extrapolation is also firmly routed in the late 60's: military drafts for perpetual warfare and draft dodging, frequent acts of domestic terrorism/sabotage, hyper-sexualized relations, etc. One thing it highlights is the fact that progress was made towards improving race-based civil rights far ahead of gender equality. In this book there are a couple active women, notably the head of GT, but they're barely characterized. All the other women in the book are cardboard stereotyped whores ('shiggies' in the slang of the novel). Compare that to the black VP and international diplomat who drive the action of much of the book. You can see why the Civil Rights Act passed and ERA didn't, and why Barack Obama is the Democratic nominee for President and Hillary Clinton isn't.

Another contrast between Zanzibar and earlier Campbellian fiction is the different type of future they portray. Campbell's writers notoriously predicted bright, shiny futures with lots of nifty tech and little social strife. Zanzibar predicts a near future so wrought with over-population that eugenics laws are increasingly draconian (e.g. you can't have children if you have a family history of color-blindness), and people are so stressed out by being constantly jammed together that any minor spark will cause a massive riot. In fact, the main question posed by the book is really: "How can the human race survive the coming over-population crunch, given that space colonization won't come in time to save us?" In the over-romanticized idyll that is Beninia, Brunner suggests an answer, but it's a thin thread to hang a lot of hope on.

It's very reassuring to me that while we haven't reached the utopian heights that Campbell wished for, we also haven't hit the dystopian depths that Brunner portrayed. As we always have, we continue to muddle through the middle ground somehow. Lots of people aren't well off, some are abjectly miserable. Some people have all the shiny toys, most people don't. There is environmental degradation aplenty, but we continue to find enough stop-gap solutions to stave off global catastrophe, even while local catastrophes are common. It's what we do, and it's what we'll always do. That doesn't make for as dramatic a storyline as the extremes, though: Humanity Muddles On is not going to be a best-seller. Still, when you think about how bad people in the 60's thought today would be it's hard not to feel a little smug. Our world may not be perfect by any means, but it's a whole lot better than that.

So now you need to read The Sheep Look Up, which is Brunner's other take on ecological disaster. It is more depressing, and scarily prophetic in places.

Good point. I'll definitely throw that on the list.

I noticed that Le Guin's Lathe of Heaven (recently re-released) also had some prescient predictions. Some of those New Wave sf writers were really on the ball.