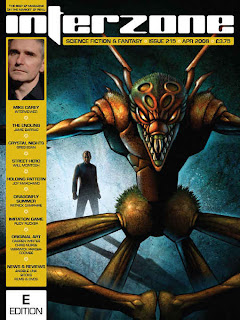 I was disappointed that this issue of Interzone led with a skippable story. "The Endling" by Jamie Barras never cohered for me, and I finally abandoned it. It starts with a paragraph about "Asha," who is looking for icebergs to carry out some sort of scan. That's the last we hear from her for five pages (presumably the printed version of the story has clearer indications of scene shifts than my electronic copy - one of the few complaints I have with it so far.) Next we get an "as you know, Bob" - style dialog between the human Wright and the alien, Antonov. Antonov has obviously had a rough time in his past. So as they're working together on something, Wright asks questions like "How many of your fellow captives had died by then?" With no background on their relationship, this seems like the sort of thing he should already know, or the sort of thing a polite person wouldn't ask. As the dialog continues, they continually refer to things such as the Melzemi, the Stro, the colony on Chard IVe, the VXIIers, etc. I have no problem with made-up terms in sf, but if you're going to use them for long you have to give the reader some context to work with. After awkward info-dumping dialog that didn't enlighten me in the slightest, I decided to skip it and move on.

"Dragonfly Summer" by Patrick Samphire was also disappointing. Two men and two women had been the best of friends during a year of college. Eventually sexual tensions got the better of them and their friendships were ripped apart. Twenty years later they reunite because one of them is having disturbing dreams. They discover that the abandoned windmill where they used to drink and laugh and fuck is now gone. It's not just that it has been torn down, it apparently never existed. No one remembers anything like that ever having been there. The main character, who was the source of most of the trouble back in the day, has to face the consequences of what he did. That appears to be the message of the story: actions have consequences. Well, duh. The disappearing windmill, and the dragonflies that used to buzz around inside it, are nothing but metaphors: it's never explained and doesn't have any plot significance. I understand that this is supposed to be a character story, but I feel that it is cheating the reader when things like that are used but not explained. You'd think at least one character in the story would be more concerned about the wholesale re-writing of their reality, but they're all obsessed with twenty year-old sex scandals, so the disappearing windmill is ignored. I finished the story, always waiting for something to happen, but it never does. The character lesson is learned, and the story stops.

After that lackluster opening, Greg Egan comes in and more than makes up for their lack. "Crystal Nights" covers enough ground for any ten short stories. Actions have consequences here too, but messing with the nature of the universe is more than simply metaphorical. A rich dot-com-style billionaire sinks a considerable portion of his fortune into developing the fastest computer ever. And he keeps the technology all to himself. (Egan may not be familiar with how computer geniuses become billionaires - they can be obsessive geniuses, but usually if they keep the things they do secret they don't become the rich kind.) He hires a team of people to put together a complete simulation of a universe inside the computer. His plan is to evolve an intelligent lifeform inside the computer that will then be able to help him in the inevitable war of super-intelligences that he just *knows* is coming. (Again, I'm just not sure that people this unstable really run billion-dollar software companies.) He repeatedly tweaks the design of the universe to keep evolution going in the way he wants it to: towards abstract thought, towards spoken and written language, towards sophisticated mathematics. Entire species evolve and go extinct in a heartbeat. He's literally playing God. Let's stop for a moment and reflect on the implications of intelligent design. What if someone has designed us, and the world, to achieve an evolutionary outcome? Given all the incredible pain, misery, and suffering that goes on in the world, how fucked up would that entity have to be? Egan presents us with the answer to that question in this story's protagonist.

Eventually the billionaire talks to his creations directly, telling one of them essentially what he wants and why. He lays out the choices: help him, or he'll regretfully have to destroy them and start over. He leaves an "Easter Egg" for them on their Moon, in the form of a monolith straight out of 2001. Through this interface, they can interact, in the most limited possible way, with our universe. We've all read "Frankenstein," and we know what happens to unethical creator figures. The computer beings find a third way and forge their own destiny, and we can't help but cheer. This review may seem spoiler-ridden, but there's a so much more going on in this story than my bare-bones summary can begin to cover. Egan is one of my all-time favorite authors, especially when he's using hard sf to examine ethical propositions. Here he's in excellent form. All the world building, the descriptions of the artificial simulation and the computerized evolutionary process are fascinating. This one substantial story is probably worth the price of the issue alone, and I'll be keeping it in mind come awards time.

Quote "That's the last we hear from her for five pages (presumably the printed version of the story has clearer indications of scene shifts than my electronic copy - one of the few complaints I have with it so far.)"

Hi Karen, I'm glad you got something from the issue. Can I ask if you were reading the review PDF or the Fictionwise edition? If the latter maybe we can improve layout or clarity to reduce the problem.

Thanks for dropping by! I read the Fictionwise edition (I've got a two-year subscription.) I get the version that's formatted for the eBook that they sell.

There was another problem with that issue that I hadn't noticed in either #213 or #214: occasionally the first sentence of a paragraph would have all the words run together, making one long word that would go off the end of the page. For instance I've got a paragraph from "Dragonfly Summer" that goes:

What do I remember? I remember Howie running along the edge [next eBook page]
ofthebeach,longhairandleatherjacketflappingwi[I can't see the rest of it]
Sophie in one of her skimpy little outfits....

Thanks for your help! Any improvement in the electronic edition is a good move in my (e)book.

Thanks Karen, Our electronic editions editor has been informed.

Thanks for that. If I see any other abnormalities with my e-version as I read, is there someone I could contact about them?

It's in my best interest to try and make the e-versions the best they can be.

Egan's is definitely the pearl in this issue. Such a great story, and then there's the little nod to Clarke's 2001. Tasty.

Thanks for dropping by. I'm glad you liked the story. When Egan is being that inventive it's always a hell of a ride. And you're right, I loved the 2001 reference!