The Ghost Brigades, by John Scalzi 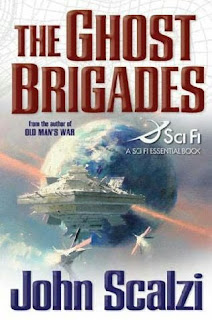 The third book in John Scalzi's Old Man's War (OMW) series has been nominated for a Hugo award this year. Now, Scalzi swears that The Last Colony can be read as a stand-alone novel, but I hate reading things out of order. When I read a series straight through, I feel like I'm getting the experience that the author intended (and I end up much less confused). Since I enjoyed Old Man's War I decided it was finally time to dig out my copy of The Ghost Brigades, which had been sitting in my to-read pile for a couple years. I'm glad I did. When I hit my to-read pile, too often I'm thinking about things I have to read: either to review, or because they've been nominated for something, or they're classics I need to catch up on, or things I need to read to "better" myself, or flat-out funny things to read when I'm burned out on all the above. The books in the OMW series don't usually fit any of these categories, so when they get nominated for awards I'm glad to have an excuse to get to them. They are fun, well-written books. I think they sometimes don't get credit for their intellectual depth simply because they are also fun books with lots of action.

The plot of the novel is relatively straightforward. A scientist has faked his own death and defected to one of the alien enemies of the Earth forces. When this is discovered, the military also finds that he had left a back-up of his brain imprint on one of the computers (brain-to-brain transfer is common, computer-to-brain transfer is not). The military decides to try to upload the brain to one of their Special Forces soldiers. Known as the "Ghost Brigades," due their basis in the genetic codes of deceased military volunteers, these soldiers are super-enhanced and tailored for their duties. They're "born" fully grown, and never have childhoods. They leave the crèche and immediately start bonding with their training group, learning all they need by mental connections to each other and to the future-Internet-analog. The "normal" human recruits (they've all had their consciousnesses transferred to custom-made military bodies as well, but for their first 75 years they were normal humans) find them really creepy.

When the new soldier doesn't show any signs of remembering the scientist's past right away, he's released into general service (realistic? No, but it's easy to go with the flow) and we follow him through his training. Eventually he does recover some memories, and has to decide who and what he is. Is he Charles, the traitor scientist, or is he Jared, loyal soldier? Or are there other options?

It's often said that science fiction has been engaged in a dialog with itself going back to the 19th century. H. G. Wells responded to the overly-optimistic apolitical engineering of Jules Verne. Cory Doctorow has called his recently-published Little Brother "Orwell fan-fic." Charles Stross has been commenting on Vernor Vinge's "Singularity" concept. However, that dialog is generally in the subtext: you have to know what the author is referring to in order to understand his commentary. Sometimes it may slide completely under your radar. Not so with Scalzi!

As Jared considered whether it was the fate of the Special Forces to be as misunderstood and reviled by the realborn as the monster was by his creator, he thought back on his brief encounter with Lieutenant Cloud. Cloud certainly didn't seem terrified or repulsed by Jared; he'd offered his hand to him, a gesture Victor Frankenstein, pointedly, refused from the monster he created. Jared also considered the fact that while Victor Frankenstein was the creator of the monster, his creator—Mary Shelley—implicitly offered pity and empathy to the monster. The real human in this story was a rather more complex person than the fictional one, and more inclined toward the creature than its fictional creator.

He thought about that for a good, solid minute.

He's got to be the least subtle sf author I've ever read. The soldiers in the ghost brigade get surnames from famous scientists, such as Einstein and Dirac. In this book he comes up with a new kind of soldier who can survive in vacuum. They look a bit like turtles, they're called Gammarans, and they're named after sf authors like Stross.

Likewise, when he's going to illustrate conundrums of military ethics, he does it flat out. Is it OK to kill the child of an alien leader, abducted to put the leader in a situation where she has to work to our advantage, and the leader finally agrees that killing the child is the necessary course of action? Ouch. The soldiers of the ghost brigades have to do some mighty unpleasant things, but Scalzi never assumes that those things are easy or even necessarily right.

In being so unsubtle, I think Scalzi is our new major author of entry-level sf. It's hard to start with Charles Stross: he's doing so much with cutting edge tech and references to past authors and concepts that if you aren't already thoroughly familiar with the field you miss what makes him great. However, for lots of us in the post-Boomer generations, Ender's Game was an easy entry point: not subtle at all, you can tell exactly what's going on, and it's a fast-paced exciting story with a lot of action. Those characteristics are shared by Scalzi's writing. From a reviewer's point of view, it's relaxing to read his stuff. It's all out there for everyone to see, so you don't have to worry about having missed something. He's the Penn & Teller of the science fiction world. He says "Look! Look what I'm doing right here!" and it's still really cool and neat even when it's not shrouded in mystery and obscurity. Plus, he directs people to other sf authors, another indication that he takes his "entry-level" status seriously. I'm looking forward to Last Colony. While I don't know how I'll be voting at the Hugos yet (of the nominees this year I've only read Rollback so far) but if Scalzi wins I don't think I'll be disappointed.