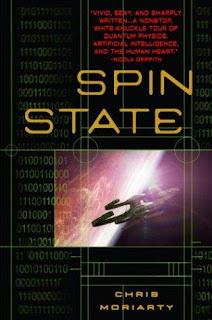 Spin State packs a large amount of material into a large number of pages. Even with over 600 pages, it sometimes feels rushed. There's a lot of explaining, a lot of plots, and a lot of players. By the end of the story I wasn't sure exactly what had happened. On the other hand, by the last third of the novel I could barely put it down.

I've been doing some thinking lately about how genre readers suspend our disbelief, especially when it comes to "hard" sf. As far as I can tell, fantasy has it relatively easy: as long as the rules are internally consistent, very little will cause a reader to lose the suspension of disbelief (e. g. you can't establish that each mage only works with one element, then have a water mage cast a fireball). Hard science fiction faces a much bigger challenge. While the reader usually wants to give the benefit of the doubt to the author, the reader also needs help to fit the author's world-building into an understandable framework. (I'll be delving into these ideas in more depth in a review for Strange Horizons that should be published within the next month or so.) Here, Moriarty both succeeds and fails. Where she succeeds is where her world-building is most directly based on extrapolation (an uninhabitable Earth, a diaspora of humans to other worlds, FTL travelers getting out there ahead of slow-space travelers) or analogy (her FTL communication/travel system is based on a scarce resource that everyone needs, just like oil). It's a little less successful when she's giving straight-up infodumping explanations. She tries to minimize them, but ends up shorting herself and her audience a little. Her FTL communications use macroscopic quantum-entangled blocks of room-temperature Bose Einstein Condensates (BECs) for FTL communications, but I could never figure out why she felt she needed the unique properties of BECs to do it; likewise I couldn't figure out how you got to FTL transportation from there. I'm pretty sure the explanation was in there somewhere, but it wasn't clear. During the first parts of the book, I spent too much time wondering about questions like these instead of focusing on the story.

And it's the story here which needs a lot of attention, as we get deluged with as many (or more) plots as we can handle. This is not just a matter of having lots of sub-plots; here we have entirely different *kinds* of plots mixed together. We've got military sf, hard sf, romance, thriller, PI-style murder mystery, and political espionage. It's all a little overwhelming.

The experiences of Catherine Li make up the heart of the novel. In a future where your rights are determined by the naturalness of your DNA, she's hiding a dark secret. She has some protection, though. She is a publicized war hero, the go-to soldier for a powerful general, and good friends with the oldest sentient AI in existence. After a botched raid on an illegal tech station, Li is diverted to the planet of her birth. This planet is the sole source of useful BECs. There, the most famous scientist in the world, the person who made all the FTL stuff possible, has died catastrophically while experimenting on the BECs. She appeared to be on the verge of creating synthetic BECs, which would liberate the society from dependence on that one planet. Li's high-level military contact needs her to go and solve the mystery of the scientist's death, even though it's the last place in the universe that she wants to be.

Here is an abbreviated list of some of the agendas in play: Cohen, the AI, is fighting for more rights for his AI brethren; the general may or may not want Li to actually solve the mystery; the scientist may have been passing information to the "Syndicate," the bad guys of the previous war; the mining company that controls the planet wants to maximize profit and minimize scandal; the miners are trying to unionize; and Cohen may be in love with Li, who may be in love with a Syndicate agent. It's all very complicated.

This is a story that you'd have to read twice to get everything straight, and I'm afraid that's I luxury I don't have. However, from the time that Moriarty describes Li and one of her policemen helping the rescue efforts after a mine explosion, all the way to the final showdown, the story grips you and doesn't let go. It's very impressive; even the "slow" times in the final two hundred pages, where the pieces are being set up for the end game, are intense and well written, always keeping you turning pages.

I have mixed feelings about this story. It is needlessly complex, both in its hard sf aspect and in the plethora of actors and agendas scattered throughout the multiple plots. There are a couple places where the characters have to be kind of stupid for the story to continue as the author intends. On the other hand, it's good to see a future that still has significant class conflict (the miner's union vs. the corporation). Too often recent sf has been set in "post-scarcity" worlds, where everyone always has enough, eliminating socioeconomic class as a source of friction. I can understand how it makes life easier for the author, but it's never struck me as particularly realistic. Another interesting point is that all the different plots seem to constructively interfere with each other to create something really readable, if not straightforward. Is this a case where the author's craft and talent salvage a victory from what would otherwise be a confused mess, or has Moriarty discovered an alchemy of plots that really can make a PI murder mystery, a romance, and a spy novel all play nicely together? It's hard to say, but it's easy to recommend that you take a look at it and see if it (or any one of its myriad pieces) is to your taste.