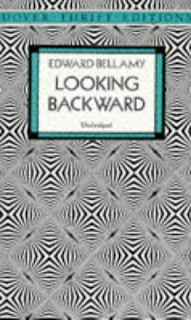 Looking Backward: From 2000 to 1887 is a classic of the utopian form of genre fiction. In this case, a rich young idler falls into a deep trance in 1887. He is discovered and revived in the year 2000. The world of the future is darn-near perfect, and his hosts tell him, at great length, why their world is perfect and his sucked eggs. This goes on for a very long time, and the only semblance of a plot is the young man's inevitable romance with the daughter of his hosts.

90% of this book is dedicated to explaining the social system of the year 2000. Despite repeated protests that no system could ever be simpler, it takes roughly 200 pages to get through it all. The core idea is universal employment and freedom from want for everyone. Given this goal, the author tries to back out a system that would supply this. Instead of going the way of socialism or Marxism, as one would expect from a 20th century author, Bellamy looks to the armed forces for inspiration. He envisions an industrial army, where all of industry is controlled by the state. Basically, let the monopolistic trend that was so prevalent at the end of the 19th century continue to its logical extreme, then have the government take over the resulting corporate monolith.

Obviously this is my capitalist bourgeois-ness speaking, but the result is the worst kludge of an economic system I could ever imagine. All the efficiency of government bureaucracy with all the potential abuses of the corporate system, combined with the abuse potential of the armed forces. Bellamy suggests that instead of wages tied to performance, everyone would receive an allowance of credit that they could spend on whatever goods and services they desire, and that these would be plentiful. What would induce people to work hard then? The desire to move up the ranks in their industry, gaining more honor as they go. Wouldn't they then be envious of those above them? No, because without one's material needs hinging on promotion, there would be no envy or jealousy at all. Crime, fraud and corruption would be essentially unheard of.

This has all the naivety that has given utopias a bad name for the last century or so. It assumes that human nature will become perfect if we can only find the right political/economic/ethical system. Also, it treats workers as essentially interchangeable units, something that has never worked out well in history. Plus, while it presents all workers as being free to choose whatever employment they want, it also mentions that the government can offer inducements to get workers into less desirable positions. Sure, that would never be abused.

There are some points here I could agree with: with such a strong social safety net, property-driven crime (robbery and mugging) would likely decline. If all children were fed properly and given equally excellent education, we would likely get a healthier and even more productive and innovative labor force. However, it seems like the goal of universal employment would tend to stifle innovation. I'm reminded of an anecdote about FDR and Stalin during WWII. FDR was meeting Stalin in Russia in the winter. He looked out the window and saw women sweeping snow off the walkways. He asked Stalin why he didn't have machines clear the walkways; it'd be faster and the women wouldn't have to be out in the cold. Stalin said that machinery would put the women out of work, and he could never do that to loyal citizens. FDR contemplated the scene for a moment then asked: "Why not give them teaspoons?"

Is our capitalistic system perfect? Hell no. I'm certainly liberal enough to see that. However, the capitalist system we have today is very different from what they had in the 1880s. Back then they were suffering from the worst excesses of laissez faire capitalism. You had trusts running up prices, robber barons, corruption at every level and branch of government, no labor protection, violent labor strikes put down even more violently, and shocking poverty. Completely unfettered capitalism quickly turns into a nightmare. However, our answer, instead of transforming into utopia overnight, was to strengthen government regulation of business. Gradually since the early 1900s, and especially in the wake of the Great Depression, our capitalism is now pretty tightly regulated. We've still got lots of problems, particularly with health care and the environment, but we've come a helluva long way from the squalor of the 1880s.

So given that this book never became an economics handbook for a new movement, what value in reading it now? It is very interesting from a historical point of view, especially in reminding us how different things were then. For instance, identity politics don't appear in this story: towards the end he does mention that women participate in a parallel labor pool and aren't dependent on their husbands for support. They leave the workforce to have children but can return to it any time. That's nice. Plus, they're saved much time by only having one place to shop and communal dining rooms. However, race is never mentioned in the future milieu. To me it implied that there is no more racism and that all races participate equally in the industrial army and that miscegenation would be acceptable. I wonder if the readers of the time would read it the same way, or if the author was writing it that way?

Bellamy did at least presage the basic concept of radio entertainment, although he had to use telephone wires to do it. And in extolling the virtues of central distribution, he predicted the rise of WalMarts, in an off-kilter sort of way. Probably not quite what he had in mind. Other than that, he predicts almost no advances in technology or even fashion, which reinforced my feeling that this utopia was a static culture. It was amusing when he tried to describe great literature in the absence of conflict of any sort, though!

Overall, this is less a story and more a polemic. The author's primary focus is outlining his political beliefs. This makes it a little easier to see the origins of Olaf Stapledon's style thirty years later. He too wrote books with an exposition-to-plot ration of 1:0. He was one of the last writers to do so explicitly (or maybe Heinlein, depending on your readings of Starship Troopers and Stranger in a Strange Land). I for one am quite glad that the genre moved away from this part of its origins. We may still have a significant amount of overtly political sf (see Brian Aldiss' HARM and Ken MacLeod's Execution Channel), but now they have to at least pretend to have a plot at the center of the book. Amen.