In Which Suspension of Disbelief = FAIL 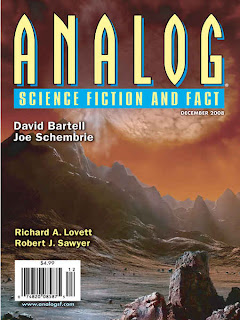 Analog's December 2008 issue starts out in a less-than-promising way. "Misquoting the Star" by David Bartell begins: "No one wanted to be remembered as The Voice at the End of the World, so when the asteroid nicknamed "Big Bastard" exploded into the Earth, the event went unnarrated. No one wanted to direct the angles from the cameras on the Moon, on the Earth, in their orbits and Lagrange points, so the video feeds cycled mosaics of them all, automatically." This didn't help me suspend my disbelief for the story; it is my fervent belief that a number of journalists/newscasters secretly hope that the world will end someday, just so they can report it. In my own personal experience I've heard paramedics wish for a jetliner crash, just so they can respond to it--same concept.

After that opening, I never fully trusted the story. The basic background, that a handful of people escaped the Earth before it was wiped out by a dinosaur-killer asteroid, was no problem (and apparently was described in a previously published story). However, this story centers on a woman who administers one of the colonies. She starts to fall for an African guy. Then she discovers he's got AIDS (all the people in the colony were supposed to be screened against this sort of virus, but his father had given up his seat for him). Aaaand she discovers that it's still incurable, despite a quack doctor's attempt to do so (not quite sure how that was necessary to the story, except to delay the inevitable). But here's the part that I really had problems with: she eventually understands that when they resettle Earth, things won't be perfect no matter how much she wants them to be, so she will eventually let this guy return to Earth instead of forcing him to stay on the Moon forever. Really? You're going to let a guy with AIDS possibly re-introduce this deadly virus to an otherwise virus-free population (maybe you'll ask him to promise nicely not to have unprotected sex?) just because the future won’t be a utopia? There's not-perfect, and then there's being stupid, and I felt that this character ended up on the wrong side of that line. Oh well.

Next up is a story by Jason Sanford, whose work I had previously enjoyed in Interzone ("The Ships Like Clouds, Risen by Their Rain"). Here he gives us a story with another interesting background. This near future Earth has a made-up religion, and its members are terrorists trying to keep people on Earth, away from space. Before the story started, they exploded a bomb that damaged a lot of satellites. This keeps a woman raised in this religion from becoming an astronaut. She's pretty disillusioned, but eventually agrees to help one of her co-religionists with a repair mission (they've been challenging the blockade with high-altitude aerostat balloons). However, she realizes that her repair mission is supposed to be one-way, and would threaten a NASA installation. She eventually saves the day, causes her priest and employer to be arrested, and winds up back in NASA's good graces. This is a good adventure story, no doubt, but I felt like the world-building could support a deeper examination into religious fanaticism, and I was a bit disappointed that it didn't happen. No worries, Sanford's world-building skills are good enough that I'm sure he'll get there someday.

"Moby Digital" ended up being a "skip" story for me. It features a VR environment where students can immerse themselves in a fictional world. A group of students gets trapped there while examining "Moby Dick," and a tech has to go in to save them. They'll die if he doesn't, because when the power runs out on the VR modules they contract and crush the user. I refuse to follow a story motivated by incredibly bad/stupid/unsafe engineering (especially in our time of over-engineering and over-warning-labeling everything because of liability issues). Basically, if the engineering of the modules was half-way competent, there'd be no story. I’ll pass.

Lastly, we get the second installment of Robert Sawyer's new serial, "Wake." I reviewed part one and liked it, and I liked this section as well. It introduced a new plot thread in having two sign-language capable simians talk to each other over the Internet, and a chimp subsequently developing the ability to paint figures instead of abstracts. The math-whiz blind girl develops more abilities with her new implant, and also deals with a boorish high school dance date. There's an unfortunate moment when a sulky walk home could have been avoided if she'd brought her cellphone, and it's hard to imagine a Western teen being without one even at a dance, but I still like the way the character is written. I'm waiting to see how all the plot threads connect; I can see their thematic similarities, but they're not meshing yet.

I'm not planning to continue this project of keeping up with this much magazine short fiction in 2009, as I've already mentioned. However, I am considering finishing "Wake" and also the serial that David Brin is running over at Baen's, "Shoresteading." These are reliable authors, good storytellers, and I'm always curious to see what they'll come up with next.
Posted by Karen Burnham at 14:58

Who knows where to download XRumer 5.0 Palladium?
Help, please. All recommend this program to effectively advertise on the Internet, this is the best program!