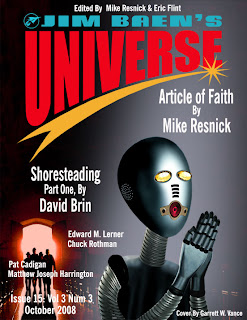 Baen’s Universe, in it’s freshest-but-one issue, continues its rather classic sf feel. Its very first story, "Article of Faith" by Mike Resnick, feels very much like an Isaac Asimov story. Its “Real Year” may be 1950 or so. A robot comes to work at a church, and the pastor begins to discuss matters of faith and religion with him. The robot thinks deeply upon these matters and decides he wants to join the congregation. The congregation, driven by racism and suspicion of robots "stealing jobs," ends up beating the robot to death; the pastor gives up his position and goes to work in construction. In one way this is a universal story of people fearing the Other and it is as applicable now with people fearing Muslims or Mexicans as it would've been in the 50's with race issues. However, the whole treatment feels somewhat dated and unsubtle. As always Resnick writes it well, but this feels like older material.

Chuck Rothman’s "A Date with Patti Pleezmi" also feels older--a female bartender on the Moon has established a niche for herself. In her youth a boyfriend exploited her to make her the basis of one of the more popular VR porn characters available. She ran away from her old life in shame, but now the boyfriend has turned up again. She has a conversation with the VR character based on her, and learns that sometimes folks are understanding about past mistakes. There's very little about this story, at its core, that couldn't be written as a Western. Nothing wrong with that, but again it feels dated.

"Shoresteading" is the first part of a new David Brin serial. I read it all the way to the end, and I suspect I will enjoy the whole story. Of course, I’ve long been a fan of Brin’s work. He sets “Shoresteading” in the relatively near future and it feels a bit like his novel Earth, one of my all-time favorites. However, this appears to be a more focused story than Earth's epic multi-character narrative. A Chinese man and his wife and child have claimed some sketchy property off the coast of China--it used to be a beach-front house before the sea levels rose. During his daily scavenging for food and useful things to shore up his tenuous position, he finds a valuable artifact. It may be tied to aliens who have recently come to Earth. Most of this first installment is set-up:introducing the character, the world, the motivations, etc. However, there's also an over-long chase scene that is entirely one-sided; the hero is running away from something he imagines to be following him. It's a bit odd and definitely takes up a too much of the section. I feel like Brin tries to hook readers with some whiz-bang action, but it would've been better if there were external motivation for it. No matter, I'm looking forward to seeing where this story goes.

"The Rings of Ragnaran" by J. Simon tries in a way to emulate Hitchhiker's Guide to the Galaxy and does so marginally successfully. Many alien species get together, all with the goal of peace, and promptly begin tearing each other limb from limb in the name of diplomatic relations. There's also a super-computer that may be willing to destroy the whole universe to get some peace. It's a clever story, and elicits some giggles, but it goes on a bit too long.

"First Rites" by Nancy Kress has some good elements, particularly an international perspective I appreciate (along with Brin’s, above). A young boy, the product of illegal bioengineering experiments, gets smuggled from America to China by his surrogate mother. He has all sorts of psychological issues, and only medicine sent from America keeps him alive. His benefactor brings him back to America when the surrogate mother dies. The guy then has to deal with his girlfriend, his ethical issues, a difficult child, and the adoption bureaucracy. It all gets very complicated, then a super-giant solar flare approaches the Earth. I liked the story better when the consequences were personal instead of Earth- and Universe-shattering; I didn't feel that this story structure supported such weight very well. The ouroborous-ness of the ending seemed particularly implausible.

"Mudlark" by contrast is a neat little story by Pat Cadigan. A woman's elderly mother goes missing as they are vacationing in London. When she is finally found she is acting completely out of character, like trash-picking along the banks of the Thames. However, the police can do nothing; the mother is acting on her own recognizance and there's nothing the daughter can do about it. She has to learn to let go. The speculative element on this story is almost entirely unnecessary, the message about children letting go of parents as a mirror of parents letting go of children stands perfectly well without the supernatural-metaphor-for-death element that seems tacked on at the end.

"Soul Survivor" is a very interesting sf/ghost story. Following its "one-drop" policy, Baen's classifies it as fantasy, but I'd argue it is sf (about which more later). Anyway, a rich eccentric gentleman is the only survivor of a horrific future battle; he's mostly full of reconstructed parts. He buys some property outside of a decent, all-American small town. The property is crowded with ghosts, and he sets about fixing their problems and seeing them off to their final destinations. All the vignettes are great, and the hero is a Competent Man in the grand Heinlein tradition: hates government and most journalists and knows exactly what his rights are concerning defense of his property. Eventually he finds true love in the form of a totally sexual female ghost made physical again--of course there can't be a happy ending without lots of sex in a Heinlein story. I really enjoyed this, in all its rambling glory, despite some of the eye-rolling bits. (BTW, although I admit that ghosts per se are supernatural, hence fantastic, I see them as a trope of the horror tradition. In my idiosyncratic way of looking at things, horror isn’t a genre of its own, it’s an effect that can modify any other type of story. Mainstream horror, fantasy horror, thriller horror, or sf horror. I know this completely ignores John Clute’s much discussed arguments in The Darkening Garden a couple of years ago, and I’ll happily admit to being less well-read in the genre than he, but I still haven’t quite gotten talked out of this belief of mine.)

To wrap up, "Homo Sylvanus" is a pretty lame story that relies heavily on contrivances to get its plot where the author wants it. The story tells of a society that believes genetic engineering is mostly evil and cloning steals souls, but of course a kid with lots of genetic engineering who is also a clone is still a good kid. And the kid rebells against the system. Whatever. The final story, "Russian Roulette" is flash fiction about precognition. A neat package, but nothing Earth-shattering.
Posted by Karen Burnham at 13:54