Analog Broke out of its Stereotype in November 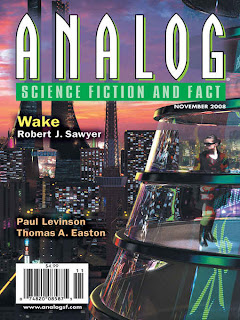 Two of the stronger stories in November's Analog (by Alan Dean Foster and Oz Drummond, and even one by Richard Lovett) were quite atypical for that magazine; I'm a bit surprised that this didn't make a somewhat larger impact. Do any reviewers actually read Analog anymore? (Of course since I'm going to stop reviewing it in 2009, I suppose I'm not one to talk.)

Before getting to those, this issue of Analog leads off with the first installment of a new serial by Robert J. Sawyer, titled "Wake." Remember that his last serial in Analog, Rollback, was nominated for a Hugo. “Wake” lacks some of the initial momentum of that one; Sawyer takes a little longer to get to the central motivating plot. The story is told in two threads. In one, a blind teenage girl has recently moved to Canada (no surprise, given that Sawyer is probably the most Canada-centric of today's genre authors). We learn about her and her life, and then some researchers in Japan contact her about her blindness. Due to the very specific nature of her condition, there is a chance that a hardware/software implant could successfully translate between the input her eyes receive and the neurons needed to interpret the signals. At first the implant doesn't appear to work, but it provides the cliff-hanger ending to send us off, looking forward to the next installment. The other thread involves the Chinese government cracking down on their nation's internet access when they resort to less-than-humanitarian means to control an epidemic. As well as throttling pro-democracy bloggers, this sudden severing of connections also appears to inconvenience some sort of nascent intelligence... it probably won't take experienced genre readers long to see what Sawyer is building up to here.

I found “Wake” interesting and readable, although without the emotional resonance of Rollback. I'm a bit dubious about the blindness cure offered by the researchers; it didn't line up well with what I learned recently in a Neuroscience graduate class. On the other hand, I'm totally willing to believe that Sawyer has read more recently published research than I have. So far my biggest problem with the story is that the two threads don't seem to connect well. They will likely mesh more smoothly in the later segments of the story, but in this one they seemed completely unrelated. That makes it harder to credit the internet-consciousness trope (and Sawyer's going to have to work mighty hard to top what David Brin did with that idea in Earth, still one of my favorite sf novels). Still, it will be interesting to see where he takes it. With Sawyer you know you're in the hands of a good storyteller, no matter what.

To address all the middling bits, "Greenwich Nasty Time" is an implausible story about a physics experiment throwing things around in time. Given that it doesn't examine its consequences deeply or do much with the characters, its implausibility is fatal. "Mea Culpa" by Stephen Burns is a pure in-joke story for Analog fans. The weakest story was "Unburning Alexandria" by Paul Levinson. This starts out as a typical save-the-library-at-Alexandria time travel story, but turns out to involve Socrates and the cure for some sort of disease, and then just sits there, doing nothing. I ended up skipping it after it had a few strikes: the characters assert that they took Socrates into the future instead of leaving him to his death sentence. Having read Plato's Crito and Phaedo this is an insult to the man; Socrates appears to have spent the last days of his life persuading his friends not to save him, that he'd rather die than live a less-than-perfectly honest life. To rescue him anyway seems like a slur on his memory. Next, the characters appear to be looking in Ancient Greece for the cure for some sort of disease; what the heck they expect to find in the days before germ theory that might help them is beyond me. Third, there's hints of some sort of nefarious bad guy who acts to thwart the good guys’ interests--the way it's described it appeared to be setting up a big ol' cliche. Then there's the fact that the story completely runs out of narrative drive even when the heroine finally gets to go somewhere and that was it for me.

Now, on to the more atypical entries. "Cold Fire" by Alan Dean Foster is a neat story about a man in Alaska, saved from the elements and his own stupidity by an Inuit. Upon waking in their home, he discovers a secret about the daughter of the family, but eventually realizes that he should leave well-enough alone. It's a solid story, told with warmth and humor, and with some things to say about race relations. My biggest quibble is that it might as well be a fantasy story for whatever minor hand-waving Foster does with the speculative element, but while that's odd for Analog it's fine with me.

Richard Lovett's "Bug Eyes" provides a nice twist on first contact coming to a probe on a Jovian moon. The probe's been running for years and doesn't have any AI capability. When the researcher driving it sees something amazing, he assumes it's a hoax. Then the time-delay for commands causes additional complications. The story moves on from there, backing away from the improbable first contact and focusing on how it affects the researcher's life. He undergoes real character change as a result of his experiences. Thus when the aliens show up again, he's more prepared. A nice story of how mutual misunderstandings don't have to be the end of the world when it comes to aliens, and also a good illustration of how even scientist-centered hard sf can do character well.

The best story in this issue is "Recreation" by Oz Drummond. It describes a woman in some sort of VR world. She is the ultimate gamer--her every encounter with the mysterious "Him" involves her trying to figure out how to beat him in some game or other. During this introductory phase, Drummond does an excellent and unsettling job of conveying sexual tension (did I mention it is atypical for Analog?) that is obvious to the reader but not, apparently, to the woman. Eventually "He" leaves her alone for a long time, during which time she develops on her own. When "He" finally returns, He gets to find out what exactly she has been able to do for herself. This story combines insights into the gender relations in video games with the ethics of Pygmalion and conveys the strong and much appreciated message that some things aren't OK, no matter how innocently meant. (I'm afraid that I'm being almost unforgivably vague here, but I decided it was worth it to avoid major spoilers.) I was very glad to see a story of this type, with these strengths, in Analog. It will be very interesting to see how it is received by that fan base.
Posted by Karen Burnham at 20:24

Interesting look at analog but I think you missed something about Unburning Alexandria - according to Levinson, the author, it is a sequel to his novel The Plot to Save Socrates which I read and enjoyed last year. I think that if you read that book you'd appreciate this story - a lot of what you didn't understand was dealt with pretty well in the novel, especially about Crito which Levinson talks a lot about. The novel even has a "newly discovered" Socratic dialog that actually picks up right after Crito leaves Socrates. He;s not dishonored at all - it's an alternate and respectful explanation of what could have happened, that is, if you suspend disbelief about time travel. I found it to be an interesting novel, and the Analog piece continues the story.
I thought Sawyer's serial was promising too.

My goodness, that was refreshing. At long last, I see a review where the reviewer understands some part of what was in my head when I wrote it. Possibly, you're the only woman to review this issue. And to know that I'm a woman when you read it. Thank you.

Stan liked it and bought it without making any editorial changes to it and has asked me to send him more stories.

Geronimo's comment sums it up pretty well. Unburning Alexandria, with the able assistance of its author, received far more notice than Re\Creation did. And of course Robert Sawyer overshadowed all.

Hi guys! Thanks so much for your comments. I'm traveling today, but want to give your comments the attention they deserve. So I'll post a more thorough response tonight or tomorrow when I get in to the hotel.

Geronimo- Thanks for tipping me off to the previous novel by this authors. I bet that also I would've found the villain set-up to be less cliched if I had read it before.

It must be tough writing a short story after a novel. For instance, I can't blame him for not going over the ethics-of-rescuing-Socrates thing again if he's already plumbed those depths in a novel; but a short story in a magazine also needs to stand alone. It's unfair to lean on the reader's prior knowledge, considering that only some fraction of the magazine audience will have read the book. That's a hard road to hoe, but I have to say that as a reader coming to the story without prior knowledge, "Unburning Alexandria" failed as a stand-alone.

Oz - It looks like I may have finally committed the legendary "good good review!" (One where the reviewer both got the story and liked it.) I'm glad to have made your day.

Re: the gender issues. I didn't even think about the fact that some readers would assume that "Oz Drummond" would be male, but it's understandable. And I have to say, given how creepy the sexual overtones of the beginning are, now I wonder if I would've given the story the same benefit of the doubt if I hadn't known you. However, even though I do know you, I was sort of holding my breath as I read it, waiting and hoping for a repudiation of that type of relationship, a sign that the story would acknowledge how totally not-good such a thing is. And I got it! Which was awesome. Otherwise, male or female, it would've have been a totally unhealthy and squidgy wish-fulfillment fantasy, and that would've been really bad. I liked that you set up such a borderline scenario, and then really examined the (unhealthy) consequences. Kudos once more!

You knew me, as in you liked me from one dinner, but you didn't know me or know what I would choose as my subject matter or where I wanted to stand on these issues, which is what gave it an edge as you read it. "Is she really the person I thought she was?"

All other reviews were written under the assumption I was a man, though an editor at The Fix knew me and corrected the personal pronouns before that review was put online.

As one of my friends said, you, Karen, get the gold egg from my chickens.