Even the Good Stuff Has Flaws. 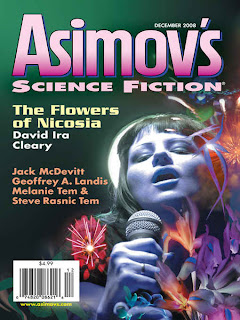 This issue doesn't have anything outstanding in it--even the stories I liked seemed flawed. Consider "Way Down East" by Tim Sullivan. Two lobstermen allow their boat to be chartered by a visiting alien (or more accurately, its support staff). The main lobsterman is at first horrified by the alien, then comes to terms with it, even as the alien chooses their boat as its place to quietly expire. This parallels the man’s estrangement from his openly gay son; at the end he appears ready to reconcile that relationship as well. This is one of the most explicit pairings of Gayness with Alienness/Otherness I've ever seen, and it's generally a lovely story. The flaw in it stems from the protagonist. A lot of the story deals with his internal state and his own introspection. It's a little hard to swallow that such a reflexively introspective man would need the prod of coming face to face with an alien to get over his knee-jerk dislike of gayness. Basically, this story sold us too well on the man he becomes to convince us of the difficult transition from the man he was.

"Welcome to Valhalla" is a story by Kathryn Lance and Jack McDevitt. I'm a fan of McDevitt's work (I’m unfamiliar with Lance), but this story struck me as too simplistic by half. A valkyrie visits Richard Wagner on the eve of the debut of the Ring cycle opera. She shows him the horrors that will be perpetrated by the Nazis, and asks him to kill his own epic saga—to cancel all performances and bury it. She admits that this will not stop the Holocaust, but she's offering him the chance to not have his name associated with that period. Wagner refuses (and who can blame him?), and the show goes on. Basically, this story throws a premise against a wall to see if it'll stick; it doesn't examine its thesis in any depth.

Steven Utley gives us "Perfect Everything," another story that didn't quite work for me. It has some clunky dialog, but the main problem is that its two plot threads don't reinforce each other. In one, a man is on a spaceship that is heading back to Earth after failing in their mission to look for extraterrestrial life. To help pass the time, he spends his off-duty hours immersed in a tech-enabled dream world, where he and his perfect girl lounge around on a perfect beach. Unfortunately, all has not been well back home, and when they return they find Earth under siege by aliens. In the course of the story, his dream-bauble gets damaged, and his perfect girl, based on someone he knew in real life, starts rebelling. It turns out that she never liked him "that way" back on Earth, but he's so pathetic that he couldn't let it go. Knowing how he's built her up in his mind, she feels a bit used. Anyway, he volunteers for a mission to go down to Earth and see what's left. The end. So you've got this alien invasion/Earth's been destroyed story playing backdrop to a "Dude, she's just not that into you" story. This leaves the story with skewed priorities, and the additional problem that the reality thread and the dream thread don't reinforce each other terribly well. They do in terms of tone: normalcy on the ship is broken by the aliens, normality in the dream world is broken when it gets damaged. However, the whole invasion plot ends up seeming like an excuse to break the bauble and then an excuse for the guy getting all distraught over the possibility that the real girl is dead. That seems like a flimsy reason for killing off most of humanity, I'm afraid.

A story that works much better (and is easily the best of the issue) is "In Concert" by Melanie Tem and Steve Rasnic Tem. They describe a woman who has always had (or suffered from) telepathic glimpses into other minds, totally at random. She is getting towards the end of her life, but she starts seeing situations that indicate that she is making contact with an astronaut who has gotten lost in space with no hope of return. She contacts the NASA-equivalent at his behest, and is able to convince one of his co-workers of the reality of this connection, thus giving the astronaut the chance to pass on final messages. Both the astronaut's and the woman's grasp on life is tenuous and fading. It is in this beautiful duet of plot and character that the story works so well. It's not Earth-shattering; it's all very quiet and sedate, but quite moving.

Geoffrey Landis gives us "Still on the Road," a purely stylistic exercise of putting the beat poetry style of "On the Road" into space. Unfortunately, I'm not up on that style of literature (my catching-up-with-literature-project, both genre and "mainstream" is currently around 1920 for the former and ~1200 for the latter), so I can't say how well it worked.

Unfortunately, the issue fails to end on a high note. "The Flowers of Nicosia" by David Ira Cleary never resolved into a story I liked. It's got a silly premise: a band ('Downtown Dharma') of middle-aged rockers obsessed with Nirvana and Kurt Cobain are close to an outbreak of Islamic terrorism. Their response is to try to use rock music to heal the rifts. Thanks to the lead singer's aunt in the State Dept., they get to perform in divided Cypress, especially on the Turkish side of the island. They meet lots of interesting people: a Muslim woman who also fronts her own rock band, and older rejected lover of hers that acts as the band's manager, and other characters on both sides of the cultural divide. They have some success in their two concerts, but there is a severe bioterrorism outbreak on the island and in the end there's nothing they can do to help. The drug-addict drummer had hooked up with the woman, but they both succumb to the disease. In reading the story I was afraid that the characters were being set up to fail, and it disappointed me when they finally did. It takes a long time and a lot of whingeing about by the main character/lead singer to get there, and if the message is simply that well-meaning people can't actually do anything to help solve the tensions between the Americanized West and the Islamic world, that's the kind of nihilism I can do without. I got to the end of the story and wished I'd skipped it.
Posted by Karen Burnham at 12:34

I just wanted to comment on your brief review of "Welcome to Valhalla."

I found this story absolutely horrible. The implication was that Wagner is some sort of "every-Genius," where he has to weigh the importance of his "art" versus the potential real world consequences.

Richard Wagner, however, was the author of "Das Judenthum in der Musik," an anti-Jewish screed, attacking all Jews as lesser beings incapable of producing great artistic musical works.

None of this is even alluded to in the story. Would Wagner have been associated with the Holocaust as closely if he weren't already the anti-Semitic German composer? Who knows, but the story should have at least MENTIONED it!

Excellent points - exactly why I was surprised that this story was so shallow. There could be a lot to engage with in terms of Wagner's history, attitudes, and art, but "Welcome to Valhalla" pretty much fails to do so.