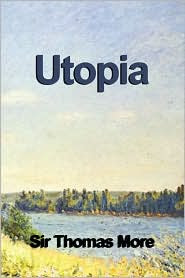 Science fiction has a strong historical connection with Utopian literature. People have long dreamed of a better place where everything is perfect. Plato contented himself with having Socrates derive such a place from first principles around 360 B. C. in Republic. In 1516 Thomas More relates the conversation of a traveller who has been to such a place. His eponymous Utopia is set on an isolated and defensible island (although not so isolated that it does not trade with its neighbours). In 1887, Edward Bellamy sets his in the future (as we were running out of undiscovered islands by that time) in Looking Backward: 2000-1887. Charlotte Perkins Gilman goes back to the isolated valley in Herland, a feminist utopia published in 1915. Eventually we have to set them on distant planets, as Ursula K. Le Guin does in 1974's The Dispossessed (although I hasten to add that Le Guin's work is more nuanced and less didactic than the other examples here).

More's Utopia starts out with More and some friends meeting a traveler, Raphael Hythloday, in Flanders and inviting him home for dinner. They speak of people they know in common, lavishing praise on More's mentor, Cardinal John Morton. They speak of affairs back in England, and Raphael begins to mention that things could be much different there. He compares England’s affairs to a land far away in which he spent five years. At first he mentions very specific criticisms—particularly against the monarchy and court politics. They get into a debate that starts with More suggesting that such a well-travelled man as Raphael should be a court advisor. Raphael finds the idea abhorrent and explains why, getting into a debate with another of More's friends. Finally they ask Raphael for a full accounting of this land, Utopia, and that monologue makes up the bulk of this (not very long) book.

Generally speaking, the elements highlighted in the description of a utopian society reflect the primary concerns of the author. More appears to be most concerned with eliminating court politics, hereditary monarchy, and reforming criminal justice. He believes things could be much simpler. In the course of the lecture, he occasionally harkens back to Plato: the importance of wide educations for the citizenry, women being able to fight alongside as men, the importance of having an incorruptible ruling class. In fact, as in most other utopias one can think of, More believes the money is the root of all evil. His citizens do not pay for what they need and there are always enough of the necessities for everyone. In fact, they make the chains of their slaves (criminals) and their chamber-pots out of gold, to constantly remind themselves of its worthlessness. (But they still keep it handy should they need it to pay mercenaries to fight wars for them—no pacifism here!) Religion is a Good Thing as long as no one gets too exclusive about it; the inhabitants genially listen to and adopt bits of all the religions they're exposed to. The only danger zones: believing that you've found the one true answer and trying to damn all your non-believing fellows, and atheism. Atheism is Right Out.

In general, this seminal work of utopian literature has the same problem as all its successors: it requires perfect people. Despite the gestures towards a better criminal justice system, you're left to believe that either no one there would ever commit a crime, or those that do would take their chains of gold and hop on the very next trading ship out of there. Likewise, to believe that in the absence of gold men will resist being corrupted by pure power is probably overly optimistic.

Having read some of the more recent works of utopia (particularly Looking Backwards) I'm not sure that reading this founding book added much to my knowledge. It really is just like all the others, but with little fillips that place it in its historical context. It is interesting to put it in a line tracing from Plato (with whom the introduction assures me More was familiar)—I would guess that later works draw more from Utopia than from the Republic, although all share the same impulses. Certainly its important to be aware of that thread in amongst the different strands that make up science fiction’s past—as well as Westerns, Space Opera, Detective stories, etc. I for one am grateful that utopianism has waned over the last few decades—they really are tiresome and seem to exist only for people of good sense to argue with. I probably could have stuck with second-hand knowledge that Utopia started the whole shebang, but there's some value in seeing for myself just how little drift there's been in that technique over the centuries.
Posted by Karen Burnham at 17:03

Thanks for reading this for me - I can push it back down the TBR list now :-).

Duncan - That's me: reading mediocre "classics" so you don't have to. You're welcome! =)