Bacigalupi Kicks You in the Stomach, But in a Good Way 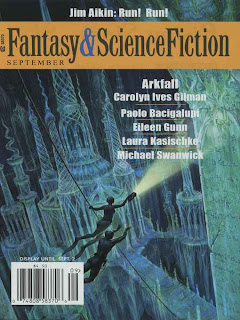 The obvious stand-out in the September issue of F&SF is "Pump Six" by Paolo Bacigalupi. You may recognize the title: it's also the title story in his short fiction collection (out this year) Pump Six and Other Stories. As titles go this one may not leap off shelves and into readers' hands, but it's a heck of a story. It shares the same outlook on the future as most of Bacigalupi's other stories: incredibly bleak. Let's look over his oeuvre, shall we? "People of Sand and Slag," is one of my all-time favorite sf stories. In the future humans can survive on 100% synthetic substances; anything can be made into food. The biosphere is almost completely wiped out, but one group of soldiers finds a dog. They try to care for it and succeed for a while, but finally get bored with it. "Calorie Man" (another one of my favorite Bacigalupi stories; I read it when I was just getting back in to sf/f short fiction): in the near future oil, gas, and coal are pretty much totally gone. Manpower powers everything; food powers people. That's great except that all the crops are under patent by megacorporations who make it illegal for anyone but themselves to grow any food. Ta-da: ultimate monopoly. Whoa. "Pop Squad:" In a world with effective immortality, over-population is such a concern that having unlicensed children is illegal. The protagonist of this story hunts down single mothers and turns them in--they're depicted as no better than drug addicts. It's totally soul-deadening, even for the hero.

Now in "Pump Six," you have a future where pollution has made people progressively more stupid. The hero is smarter than most; he at least knows not to use a lighter to check for a gas leak. He's trying to keep the sewage pumps for New York running, but they're finally starting to wear out and the last people who truly understood them are long dead. He treks over to Columbia University to try to see if their engineers can help; it turns out the university hasn't actually held classes for years. All the "students" are lounging around on the grass like contented apes. It's implied that actual devolution is being caused by the pollution, and existence as happy, mellow, stupid (and short-lived) primates is what's in store for humanity. As usual with Bacigalupi, it's a story that hits you right in the gut; it makes you feel the hopelessness on a visceral level. The only other writer that consistently hits that note for me is Alfred Bester (especially his story in Adventures in Time and Space, “Adam and No Eve”). Bacigalupi is brilliant at coming up with these scenarios, making them seem scarily plausible, then smacking you around with them. For a writer as consistently dark and depressing as Bacigalupi the thing that keeps you reading his stories is his incredible skill, and he's got that in spades.

"Arkfall" by Carolyn Ives Gilman is not a bad story by any means, but coming after a story like "Pump Six" it ends up seeming as light and fluffy as a cloud. It's basically a story of opposite people finding a third way, and it depends on a very contrived scenario to do it. On an alien planet, most people live in organic bubbles surrounding a sea-floor vent. They live in close proximity and have adopted mostly Asian-style social customs to deal with it: family comes first, individualism is out, no one argues directly with each other. A tourist to this world is a brash Westerner, some sort of former space jock. Inevitably he and a woman from the native culture get trapped in a bubble for an extended period. She eventually learns to be more assertive and take control of her fate; he eventually learns to get over himself and sometimes just let the world work. It's a very yin/yang sort of story. It's nicely done, but again it feels like cotton-candy dosed with opiates compared to Bacigalupi.

Another wonderful, if contrived, story comes from Michael Swanwick and Eileen Gunn. It's in the form of correspondence between an author and a certain company. Michael, the Chief Creative Officer of "Guilt Eaters of Philadelphia" promises to relieve Eileen of the guilt that comes from being a writer and not writing; she is heartily skeptical. They go back and forth on different philosophies of life, the appropriateness (and the mechanics) of what he's proposing, before finally coming to a (to me) unexpected but satisfactory arrangement. While this too is somewhat fluffy and definitely silly, it also digs a little deeper into what it means to be a writer, examining what motivates these crazy people.

The other stories in this issue fall into the RUMIR category. "Search Continues for Elderly Man" is another "he's probably dead but it may be VR" story, with some very nasty bits thrown in. I couldn't quite get at the point of it, if there was one. "Picnic on Pentecost" has a sort of hive-mind alien crash-landing on a planet. Only one part survives and cannot die; she has to fulfill the planet's plans for her. "Salad for Two" by Robert Reed keeps you turning pages. A young woman benefits from an early patron and builds a good life for herself. The future comes and she lives through it, profiting and moving out into the solar system; eventually she realizes that her life may not be what she thought it was. It's a nice twist ending, but it almost feels like Reed trivializes the neat world- and character-building he's done in the story by hanging it all on the "twist." "Run! Run!" by Jim Aikin has mean ol' fundamentalist Christians hunting down Unicorns; one farm girl tries to stand in their way. OK, I get the symbolism—Unicorns as wild sexuality and religious nuts who think all sex should be suppressed. However, while I'm no fan of the Religious Right, this story felt bludgeoning to me.
Posted by Karen Burnham at 09:54