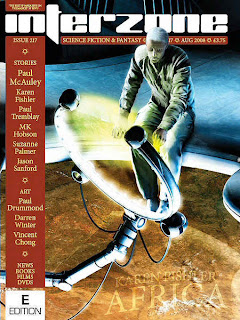 First off, I want to note that there have been some problems with my Interzone subscription on Fictionwise. For some reason the upload to the Fictionwise site (and hence distribution to me) is lagging a looooong way behind their print distribution. I finally got issue #217 in October, and #218 is nowhere to be found. I've heard other people talk about it, so I know it's out there. This is a big contrast to my other subscriptions which are always delivered well ahead of the cover date (I have the January issues of Analog and Asimov's, and the December issue of F&SF as of today). I'm sure there are logistical challenges of which I'm unaware, but it does make me reconsider where my subscription money should be going.

Banalities aside, how was this issue? It certainly had some good stuff in it. "Africa" by Karen Fishler is an interesting future story: aliens kick all the humans off Earth because we've done too much damage. The main characters are the only humans left in orbit; their continuing mission to prevent any human from ever returning. However, over the generations their population has been reduced to a father and a cloned son, and they know that their time is ending. A human ship pulls up with a woman and her dying father; they're apparently all that's left of the portion of humanity that went outward. The whole living-on-ships thing turned out to be unsustainable. The woman has one predictable last request, and the clone-son has rather predictable qualms about turning her away. You have to swallow a lot to buy this story: the aliens leave humans to guard Earth? Isn't that rather like having the fox guard the hen-house? Also, why would the woman, many generations removed from the Earth, be so obsessed with it? Etc. However the emotional portraits of the son and the woman are moving and well-done.

Jason Sanford's "The Ships Like Clouds, Risen by Their Rain" is likewise implausible but with characters that feel true. The humans of a small town live on what appears to be a literal mudball. Ships come from far away and rain down organic material on them, and our main character's job is to keep watch for the ships so everyone can get inside. These drops replenish the soil, but also cause local flooding and devastation. Sometimes a child of the village is smart and ambitious enough to get taken up by the ships; at least that's what people think when they disappear. There is also a fairy-tale-like taboo about not digging around underground. Eventually the taboo is broken and answers are found. This is an archetypal story about thwarted dreams and the hope of realizing them. The old woman is a great viewpoint character and Sanford does a good job of bringing her alive.

Paul McAuley's "Little Lost Robot" is just about the Exact Opposite of the Asimov story he references in the title. Asimov's lost robot was simply a man-sized robot trying to get away with something, trying to escape. McAuley's is a planet-sized solar-system-killing war machine... that finds itself with not much left to kill. It finds its way to a solar system and has a conversation with what may be a remnant of humanity. McAuley has done an interesting thing in giving the "robot" four distinct functional avatars: Librarian, Philosopher, Navigator and Tactician. However, the Philosopher got damaged somewhere along the way, and that lack gives and extra frisson of tension to the story.

"The Two Headed Girl" (Paul G. Tremblay) is much odder. A young girl has two heads, but the second one keeps switching between different historical figures. The main thrust of the story is her search for her estranged father, as she's been raised by her single mother. She also has to deal with ostracism and other emotional perils of young adulthood. It is a really weird story, and I felt like it didn't cohere. I didn't see the connection between the two-headed-ness of the kid and her need for her father. So it just ended up being weird. In contrast, Suzanne Palmer’s "Concession Girl" is a typical working-class heroine saves-the-day on an alien planet story, much fun.

"Comas of Central Park" is almost a story about the bitch-socialite character from "Stand on Zanzibar" who threw parties at which her goal was to humiliate her guests in creative fashions. In this story, one of the guests finds an incarnation of the god Pan in Central Park and brings him to the party--he's like a cross between a genie and a traveling orgy. In amidst all the sex, he helps the protagonist and the socialite learn important things about themselves. I can't say I liked it, especially because the characters seem largely stereotyped; but eventually the author does dig down underneath the stereotypes to get to some interesting bits. Here's a spoilery point: Pan reveals to the main character that she's really got suppressed lesbian desires for the socialite. She freaks out. I would assume she would freak out over being attracted to such a loathsome specimen of humanity, but instead she's freaked out at the thought of being gay. Huh? For that type of jet-set crowd? That struck an unbelievable note to me.
Posted by Karen Burnham at 10:23