So What Should SF Be Talking About? 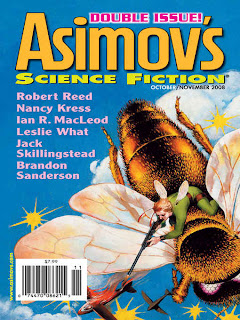 The stand-out story of the Oct/Nov Asimov’s is "'Dhuluma' No More," a short story by the up-and-comer Gord Sellar. I appreciated it for its truly international perspective. In this story a documentary film-maker goes along with a bunch of African iceberg herders. However, that's just a cover; the African guys have a radical agenda. They hijack a submarine containing a bunch of UN climate scientists. In this future, the UN has sponsored a sort of anti-global warming pollution project; they spew specific particulate matter into the sky to reflect more sunlight away from the Earth's surface. However, this has drastically changed weather patterns, benefitting some and hurting others. The Africans are pretty sure that they're (as has been true throughout history) on the short end of that stick. This passage has some qualities of wish-fulfillment:

Ngunu lifted his pistol, aiming it at the CEO's heart, and ground his teeth. Follesdal eyed the gun, and raised his hands a little. "Uh, yes, some scientists think that."

"Some?" Ngunu cleared his throat, tensing the hand holding the gun very slightly. I zoomed in carefully on Follesdal's face, to keep the gun out of the videos. "Hands down. Quit lying," Ngunu said, moving the gun closer to Follesdal's chest.

I almost smiled then. After all those years, looking for a way to make businessmen quit lying and admit the truth--and here it was, really so very simple. I almost wished I'd thought of it before.

This story hits a lot of Big Issues, and Makes You Think. Obviously there's the idea that whatever we come up with in the West to mitigate climate change will have a real effect on real people; they may come looking for us someday. This often gets left to the side in writing like Kim Stanley Robinson's Capitol Trilogy or Ben Bova's climate engineering columns in Analog. There's also the dilemma of the passive observer: the filmmaker is forced to make a decision to stay uninvolved or to actually help the Africans in their violent action. He can't hide behind his cameras anymore and he has to take a side. This is something of a call to action to all of us who read the news but think that news is what happens to other people. I'd like to see more of this sort of story, and I'll be thinking of this one when I look at the Hugo ballot this spring. This is a short story, but with enough weight that it feels longer. In this case, that's a good thing.

Another story I particularly enjoyed is Nancy Kress' "The Erdmann Nexus." On first blush it's a weird little story: in a nursing home for the elderly, people start to have weird mental experiences, and apparently they start to affect reality. The eponymous Erdmann is a physics professor emeritus, and he's trying to figure out what's really going on. There's a much larger cast of characters than is normal for a novella: Erdmann's favorite nursing home assistant is a young woman with an abusive husband; he's a cop so restraining orders have been hard to enforce. There's a neurological researcher studying something completely unrelated but he gets drawn into the mystery. Then there's the population of the nursing home: the insatiable gossip, a retired famous ballerina and a man with a crush on her, a new-agey woman, and assorted others. At times it all threatens to spiral out of control, and it seems that Kress sometimes allows it to ramble, just to give us a feel for humanity in all its messiness. In the end however, it all adds up to Something Transcendent, and all the people involved get to make consequential choices. I've had trouble with Kress' stories in the past for some reason, but this one finally overcame the resistance I'd had to her style.

My other favorite was Robert Reed’s novella on "Truth." The elevator pitch would be "Government operatives try to extract intelligence from a member of a group of time-traveling terrorists." It's a psychological story, very claustrophobic. I think it's a bit too long, but the twist is pretty awesome. It also makes a strong case for the fact that when we over-react to terrorist threats, we do far more harm to ourselves than the terrorists ever could. Preaching to the choir there! But that's a timely debate, and stories like this one, written by an author who is unfailingly entertaining, add a valuable dimension to the discussion.

Amongst the other stories: Brandon Sanderson, the poor man assigned to finish Robert Jordan's Wheel of Time saga, provides an action-adventure story in “Defending Elysium,” a novelette. It felt longer than that, which I'm not sure is a good thing. It was fun to read, but not much more.

"Prayers for an Egg" deals with strict class barriers in an alien species. It's a bit of Uncle Tom's Cabin set far, far away. It rang true, but I'm not sure that we need these sorts of stories now. In general, stories like this either appear to be about causes long since won, or they're too over-the-top to address the more subtle concerns we have today. Today we need less parables about how slavery is wrong (and that when you put your future generations in the hands of an oppressed people, those kids may be at risk) and instead perhaps we need tales about the dangers of more subtle forms of class oppression. I'm trying to think of some examples and none are jumping to mind: economics like Bruce Sterling's “Kiosk?” Charlie Stross' economic wars? Bacigalupi's future dystopias? Stories like Reed’s “Truth” speak more to 2008 than this one. However, I’m willing to entertain counter-arguments on this assertion; I may be on shaky ground here.

Fianlly, Ian MacLeod provides an alternate history in which various events lead to India conquering and occupying England instead of vice-versa. When "The English Mutiny" it is both more violent and less successful than Ghandi's movement, let’s just say that. This is an interesting story, looking at class differences that MacLeod feels would be preserved even in the face of occupation by a foreign power. I think it could have packed more of a punch had it been a bit shorter. Sometimes the narrator starts wandering around to show us more of the landscape, and the story loses focus.
Posted by Karen Burnham at 09:05