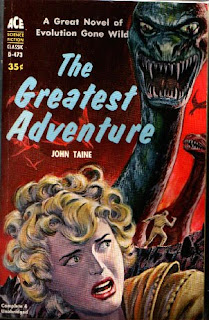 For my last official pre-Golden Age sf books, I went back to the pulps. The last two books I read were given as: “ACE Science Fiction Classic D-473” and “Galaxy Science Fiction Novel #13” and both were priced at 35 cents. Although my editions date from the 1950’s, the actual works are The Greatest Adventure (1929) and Seeds of Life (1931), both by John Taine. Before I get into his fiction, let me mention that John Taine is a pseudonym for Eric Temple Bell, a mathematician at Caltech in its early days. He developed, among other things, the Bell series of numbers, and wrote a number of non-fiction popular math and science books. From what I understand, he kept his fiction writing entirely separate from the rest of his life--to the point where his friends and family were surprised to find out about it after his death. The Mathematical Association of America published a biography of him: The Search for E.T. Bell, Also Known as John Taine which I plan on reading someday.

For the fiction, I started with The Greatest Adventure. This story feels like Taine had run out of Verne books to read and decided to write his own. It is structured much like The Journey to the Center of the Earth, but with a few extra characters. Two seamen come to the house of a wealthy scientist to tell him about some fishy oddities they’ve found--as well as a gushing ocean of oil. (I read this only a few weeks after the Deepwater Horizon well was finally killed, so this didn’t seem like quite so attractive a prospect to me.) The scientist agrees to finance an expedition down to Antarctica--the seamen can profit from the oil, and he’ll profit from the biological research. He also brings along his smart and pretty daughter and the smart young man obviously destined to be a son-in-law. They get to the Southern seas and start having Adventures. There are dinosaurs, and killer weed spores, and gushers of hot gas, and lots of other challenges. In the end they escape with little but their lives.

It’s a fast read, and actually has some things to recommend it to the modern reader. For one, the female lead is not insufferable. She’s actually the best pilot in the bunch and gets to do some flying--she’s not one for having to be rescued all the time (not, I'll grant, the impression you'd get from the cover). Also, the story has a sense of humor, especially in the first mate character. And the whole thing is rich trove of tropes that are more and less common now: it shares an obsession with Antarctica with many other classics (think of At the Mountains of Madness and The Purple Cloud and Who Goes There? among so many others). It must have been useful to have a huge, barely explored, and almost unreachable continent on which to project your fancies. And then there are the dinosaurs! Jurassic Park anyone? Well, these aren’t the product of Man, but nothing says Adventures quite like heroes running away from dinosaurs. 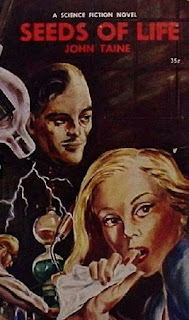 Next I picked up Seeds of Life and it couldn’t be more different. It’s fundamentally a lab story, and has far fewer redeeming qualities. An irresponsible lab tech mutates himself into a genius while mis-using equipment. He takes on a new identity and comes back to run the lab and make its corporate owners rich. Unfortunately, the same radiation that mutates him creates many other horrific beings. He marries the director’s daughter, but horrible things are happening in her womb. Also, his mutations start to wear off (!) and he comes to realize that what he’s set in motion is wrong, but he also can’t stop it. He’s neither the hero nor the viewpoint character of the book--that is another scientist instead. Our hero is simply darn smart. He’s not smart enough to thwart the bad guy, but he knows that something is wrong and does his best to warn people. In any normal novel he would get the girl (the director’s daughter) at last, but this is a very dark book that spends a lot of time teetering on (or crossing the line into) horror, and there’s no happy ending here.

While this book has some effective (horrific) imagery, that’s about the best I can say for it. The plot in a way pre-figures Flowers for Algernon, but it’s the Evil Universe version. The daughter is a horribly stereotyped cliche with no reality of her own--she lacks any semblance of agency and is horrifically punished for the crime of being attracted to the charismatic bad guy instead of the stalwart good guy. (By the way, there are some dinosaurs here as well--including one presented in a theatre to a crowd of disbelieving scientists. Shades of King Kong, two years before that story hit the screens.) The plot is awfully convoluted, and I couldn’t help but feel that it contained just as many twists as needed to fill out an installment count.

For those of you who enjoy the pulp sf adventures of the past, you could do a lot worse than pick up some Taine novels. But you might want to read some reviews first: if I pick up more of his work, I’ll be pretty choosy. I could easily enjoy another romp in the vein of The Greatest Adventure, but I’d like to avoid any more four foot wide black widow spiders dropping onto people’s heads a la Seeds of Life.
Posted by Karen Burnham at 20:50