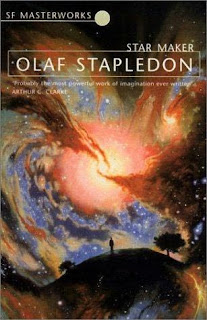 [This is a review that I wrote in 2007 on my old website, reprinted here so I can link to it.]

In Last and First Men Olaf Stapledon covered all of human history up to the extinction of mankind roughly two billion years from now. In Star Maker he covers the history of our entire universe, plus other universes as well. Amazingly, he provides a vision of what could be described as a secular religion.

Our narrator is a human who ends up projecting his consciousness into the cosmos and discovers the ability to see things distant in both time and space. As he encounters new species, he gathers alien compatriots with similar abilities, and together they probe the far reaches of the universe and beyond. The structure of the tale is that first he is only able to encounter species very close to humanity in consciousness and level of civilization. As he binds with more alien minds they become able to perceive aliens of much different biology and advancement, eventually leading up to the climactic encounter with the Star Maker himself.

Thus Stapledon is able to let his mind and imagination wander all over an incredibly broad canvas. First we meet aliens much like ourselves, then slightly weirder, then weirder, until we have fish/amphibian symbiotes, vegetable intelligences, the intelligences within stars (very alien), the combined minds of galaxies, and the combined mind of the universe itself. Only at that stage do we get a glimpse of the Star Maker, more accurately a shaper of Universes, and get a brief idea of where we fit in the incredibly grand scheme of things.

The end vision of this book verges on the religious, although it is a religion that even an atheist could love. The Star Maker is making a series of Universes (at least that is how our pathetically linear-time-limited intelligences perceive it), each of which reaches some new aspect of sophistication. Our universe is somewhere in the middle of this “sequence.” The Star Maker does not care about our individual lives and struggles except as they add to the tapestry that becomes the complete aesthetic vision of that particular universe. The Star Maker certainly is not meddling in day-to-day occurrences within any given universe. One of the aliens captures the sentiment thus:

He looked down once more upon the ruined city, then continued, “And if after all there is no Star Maker, if the great company of galaxies leapt into being of their own accord, and even if this little nasty world of ours is the only habitation of the spirit anywhere among the stars, and this world doomed, even so, even so, I must praise. But if there is no Star Maker, what can it be that I praise? I do not know. I will call it only the sharp tang and savour of existence. But to call it this is to say little.

The same liberal, secular humanist world view that Stapledon provided in Last and First Men informs his vision here. He posits that the only way to achieve our fullest potential is to learn to relate to even the most alien beings as “human” in some fundamental way, and to be able to blend our consciousnesses with the Other in order to achieve a higher level of mental sophistication. It is a compelling vision, one that presages much of the New Wave philosophy of alien contact that would be written in the 60s, 70s and beyond. As in the previous volume, Stapledon becomes easier to read the farther he gets from humanity; when he talks about people much like ourselves he can come off as preachy or didactic, but when he describes the truly alien he is at his strongest.

The writing of this book is not the easiest to read; it is in no way a novel, lacking any real plot, character or dialogue. It is a work of pure imagination and philosophy, and it is structured as much as myth as anything else. It is also informed with a certain urgency, written as it was during the Great Depression, close to the start of WWII. It recognizes many political issues of the day: the pacifism of Ghandi and its inability to cope with the fascist threat, the failures of capitalism and how they’re blamed on the proletariat, the numbing of the masses with popular entertainments. It is a window on politically liberal British thought of the time. More than that, however, it could almost have supplied a mythos for the Secular Humanist world view. In reality, Secular Humanism rejected any notion of the deity (see the First Humanist Manifesto: “FIRST: Religious humanists regard the universe as self-existing and not created.”) and thus couldn’t countenance even such a distant power as Stapledon’s. This is a bit of a shame, since the overall message of the book is a brilliant balancing act between the overall futility of our individual lives and fates, and their place in the overall beauty and aesthetic of the universe. As an atheist I found it a strangely compelling and reassuring vision, one that took into account the realities and scope of the universe as a time and space infinitely vaster than one human life, while still imbuing each individual life, species, solar system and galaxy with some meaning, albeit a humble one. This is not a trivial achievement, to be so realistic without resorting to nihilism, and philosophically it may be one of science fiction’s finest accomplishments. It should be more widely read, and I recommend it to all those looking for deep intellectual engagement with their science fiction.

I just finished reading "Last and First Men" and "Star Maker", and I wanted to hear what others had to say about these amazing books. I like your reviews, and I agree that more people should be aware of these masterpieces. thanks!