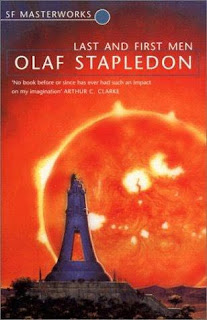 Last and First Men is written almost as a documentary about the fate of humanity projected into the very far future. Throughout descriptions of the eighteen “races” or phases of Man, humanity repeatedly almost destroys itself, only to pick itself up after millennia or eons and rise up to higher heights, until eventually falling into permanent decline and extinction. It is the work of a fertile imagination, and also a very cosmopolitan definition of “human,” as most of the ages of Man involve creatures much different than ourselves.

Stapledon obviously has a political agenda with this narrative. He pushes a secular, liberal humanist agenda throughout, always with an eye for the futility of it all in the (very) long run. In his mind diversity and cosmopolitan attitudes are key to human progress and survival; only when humans can look at almost all other humans and recognize them as equals can we work together to achieve great works. He doesn’t have much use for technology; in his universe the first race (us) gets hung up on the wonders of aviation and doesn’t progress further, and it takes until the Fifth Men for us to develop any kind of space travel (even though the Second Men were invaded by Martians), and even then it is only interplanetary. For him biology will be more important: instead of developing computers the Fourth Men are essentially gigantic brains, and they end up designing their own successors using tailored breeding programs (a common theme in this story).

The hardest part of the book to read is the first part, where he sketches out a possible future for us, the First Men. Since he was writing in 1931, it is impossible not to compare his predictions with some of what actually occurred: we certainly got to space flight a few eons before he predicted, and we haven’t formed a real world government yet. Some passages are quite prescient, though:

The economic life of the human race had for some time been based on coal, but latterly oil had been found a far more convenient source of power; and as the oil store of the planet was much smaller than its coal store, and the expenditure of oil had of course been wholly uncontrolled and wasteful, a shortage was already being felt. Thus the national ownership of the remaining oil fields had become a main factor in politics and a fertile source of wars.

It’s not a huge leap, and today it is patently obvious, but it shows the detail of his extrapolative process even back then.

Once we leave the First Men behind, surviving only through the most miraculous accident, things are easier to read since you don’t have to compare the text to reality all the time. His imagination runs rampant, through different biological forms, politics, aesthetics, philosophies and social organizations. With a two billion year canvas on which to paint, he doesn’t fill in many details but fills his narrative with variety. He throws away in a sentence or paragraph things that other authors might use to fill an entire trilogy.

The pioneer ship was manned with a navigating crew and a company of scientists, and was successfully dispatched upon a trial trip. The intention was to approach close to the surface of the moon, possibly to circumnavigate it at an altitude of ten thousand feet, and to return without landing. For many days those on earth received radio messages from the vessel’s powerful installation, reporting that all was going well. But suddenly the messages ceased, and no more was ever heard of the vessel. Almost at the moment of the last message, telescopes had revealed a sudden flash of light at a point on the vessel’s course. It was therefore surmised that she had collided with a meteor and fused with the heat of the impact.

Man’s first ever space flight, and neither the ship nor the crew even get names.

For all its distance and lack of emotion, this approach allows the author to investigate a huge scope of human intellectual territory. It is an approach that some other authors perhaps should consider even today. Stephen Baxter often deals with the entire universe in one book or series of books, but usually tries to bow to received wisdom regarding the necessity of having consistent characters that the audience can relate to. The enduring survival (if not huge commercial success) of Stapledon’s work shows that an author can abandon that approach if necessary. Likewise, Kim Stanley Robinson’s Years of Rice and Salt is an alternate history spanning centuries. His approach to getting consistent characters was to use reincarnation. Perhaps simply writing a mock history book would have been just as successful (more so from my perspective; I wasn’t able to finish that book, although I usually enjoy Robinson’s stories).

Stapledon isn’t the sort of author that asks the reader to emotionally engage with his writing, but instead he asks for your brain power. In spanning two billion years he engenders a significant sense of awe and amazement at the huge variety of possibility that the future may hold. Even if it does turn out to be futile (spoiler alert: humanity ends up going extinct), the vast array of experience really seems to be worth it on some fundamental level. Even for the most secular of us, that is an inspiring vision.