The Scores of the Space Race 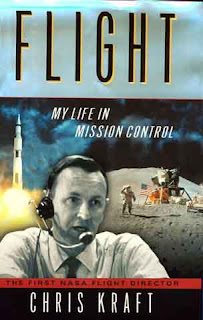 I work for NASA now, so my interest in this sort of book is obvious. Even before I landed this job though, I enjoyed Apollo-era tales of engineering derring-do. Both Flight: My Life in Mission Control and the better known Failure is Not an Option by Gene Kranz tell the story of the pre-Space Shuttle space program from the perspective of mission operations and system engineers. In the Apollo era, like no other, engineers were heroes right up there with the astronauts. (Chris Kraft, the author of Flight, even got his picture on the cover of Time magazine!)

So I'd always been curious about the fact that, while Failure is commonly available at NASA gift shops, Flight is nowhere to be seen. I finally used a birthday gift certificate to get it from Amazon. Now I understand its absence from NASA vendors. While the story is that of triumphs and set-backs that we're all familiar with, Kraft has no interest in keeping his opinions under wraps. He thinks that it's a travesty that we are, today, still dorking around in low earth orbit instead of doing something more ambitious. He lashes out both at NASA leadership and the American public as a whole. He opens the book describing how much he wishes he'd punched Wernher von Braun in the face. He talks about the differing mission objectives that were proposed before Kennedy gave his "We choose to go to the Moon" speech (Kraft says at the time he preferred the idea of building a space station before going to the Moon). He is unequivocal in his respect and admiration of Bob Gilruth, and is annoyed that the man hasn't gotten more credit. Gilruth was one of the higher-level administrators who made the Apollo project possible. Apparently, as well as being a top-notch engineer himself, he was one of those rare folks who could also lead/manage top-notch engineering teams. Instead of having a space center named after him, like Kennedy, Johnson, Glenn and Goddard have, he's just got a building on the JSC campus, the Gilruth Center. Basically, Kraft has no intention of holding back on NASA's account, and it shows.

Other than that it is similar to Kranz's book. It goes through all the missions, all the advances and set backs. It talks about the astronauts and how they handled different situations. As expected, Kraft is much harsher on some of them than Kranz is. The story has some biographical details in it, but it's obvious that one's personal life is completely sacrificed once one is in a position of that much authority (Flight Director) on a high-pressure project like Apollo. Kraft doesn't talk about the specific engineering as much, since he'd gotten promoted away from the day-to-day tech problems relatively early, but he's got more insight into the power struggles occurring amongst the NASA suits and the various political forces involved. I felt that he had a better handle on the aftermath of the tragic Apollo 1 fire.

Overall I'd say that Kranz's book is a bit better written, and probably better for someone who simply wants an insider perspective into the ground forces that enable astronauts to fly. Kraft's book has a little more score-settling, and in that way can be quite entertaining. It also gives a slightly different perspective on the program as a whole, as opposed to the mission-by-mission details. But it still tells the story of a time when engineers were heroes who made the whole world sit up and take notice. One can't help but look back wistfully on that decade, compare it to what we deal with today, and sigh.
Posted by Karen Burnham at 13:39

I have a copy of Flight, signed by Kraft, although I've yet to read it.

Ian - I think I managed to end up as one of the only people in Houston with a copy of Flight *not* signed by Kraft. :-(

That's a cool site that you've got for space books. I'll definitely keep an eye on it!