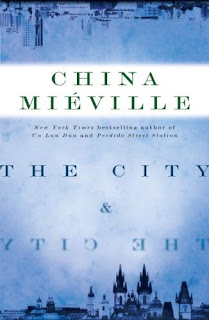 2009 is finally drawing to a close, and good riddance to it! Too many very low lows, with one great big high high do not average out to a good year! If I could have one wish for 2010, it would be summed up in the word "moderate." As you can see from the state of this blog, writing was one of the first things to be sacrified to the meat grinder of full-time employment + finishing my MSEE. Since I have a month off here between semesters, I'll be posting some short reviews of books I read this fall but didn't get around to reviewing. Aside from that, I can't promise that 2010 will be much better. My New Year's Resolution will be to start saying "No!" to new and wonderful opportunities that come my way. Finishing school has to be the number one priority for my free time. Here's to getting back into the world for real and for good in 2011!

In the meantime, enjoy some short-ish reviews, starting with the latest Mieville.
China Mieville's much talked about 2009 novel, The City & The City has an unusual central conceit. Besides that, it is a straight work-through of the implications: what if two cities could co-exist in a shared space, such that people walking in their own city must "unsee" the other city that they are also walking through? Specifically, how does that shed light on how we live in our world? Mieville uses a murder mystery as the plot and noir as the style to walk us through this world.
I had little trouble accepting the dual cities--although I accepted it on fantastic terms. In other words, I don't think it could work in our world without some sort of fantastical or magical intervention, no matter how quietly it must be happening in the background (no magic was directly invoked in the text, and it was only barely implied). But with that mental reading-between-the-lines, I was able to relax and enjoy the book. I liked the world-building quite a bit, especially as it reflected on the mental filters that we all wear to get through the day. In these cities, the detective must avoid seeing the storefronts and smelling the restaurants of the other city; in modern cities people walking to white collar jobs avoid seeing the homeless huddled around subway grates. In the book Mieville brings up the comparison to more mundanely divided cities: East & West Berlin, Jersusalem, etc. and the narrator explicitly rejects that comparison. I'm still not sure that's not a red herring meant to draw attention to those divided cities; certainly the different-yet-parallel cities experienced by those of different class strata seems a more natural target for this metaphor.
However, as a story I had more reservations: I didn't enjoy the noir-styled, spare narration. It didn't flow for me. I found it grating and annoying because of its staccato nature. I much preferred the narrative voice that Mieville used in the Bas-Lag novels (which I loved, with The Scar being my favorite). I'm actually dreading starting Jeff VanderMeer's Finch because I hear it uses a similar style, no matter how much I've loved the other Ambergris novels.
The central murder mystery was tolerably engaging, but was often pushed into the background by the world-building. I was OK with that narrative choice. My biggest reservation with the book came from the ending: without giving too much away, I felt that Mieville goes back to his political touchstones for his bad guys without justifying their inclusion in the plot. The ending seemed to come from left field without being adequately set up in the rest of the narrative. On the other hand, the character and career trajectory of the narrator in his world worked out smoothly and naturally.
Overall, I felt that The City & The City was an uneven novel, even when the reader can completely suspend disbelief in regards to the central conceit. Nonetheless, it raises a thought-provoking mirror to our world today in a way that's more immediate than the more surreal and lyrical Bas-Lag novels.
Posted by Karen Burnham at 12:29

I've read China's novel. Not only are the styles totally different...so are the plots, characters, etc.

I don't think it could work in our world without some sort of fantastical or magical intervention,


Israel/Palestine
Belfast during the Troubles.

I know people from both of these conflicts and when they read the book they had instant recognition. But you don't even have to go that far. The Ultra Orthodox Jews i Stanford Hill, near where I live, live in a geography that intersects with mine, but never touches it if they can possibly help it. They look through me on the street. I am not there for them. Think also of the way the well off ignore the poor. The book extends, but it does not create.

A reader sometimes needs to keep aside the logical stuff and go with the writer's flow to enjoy each word and cherish each page...i think the city and the city is a really good book in that sense...A1Books.co.in recently had itt in its best sellers listings and i noticed it with iots nicely written review/description given beneath... :) :) :)

Farah- Very good point. I think that the way different communities share space without interacting is just what Mieville's getting at here.

I guess where I see the fantastic element is exactly in the extension of that. In most places where that happens on a large scale, especially Belfast & Jerusalem in your examples, the situation quickly becomes vioent (or is the result of violence). The fact that the two communities in the book were (a) not violently interacting; and (b) prohibited from doing so by the fear of Breech; is where I see the element of fantasy sneaking in. At least, reading it that way made it easier for me to suspend disbelief and go with the flow of the story.