Nightmare & Fantasy, of the Most Mundane Sort 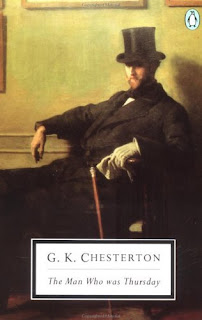 I read The Man Who Was Thursday right after finishing the epic slog that was The Night Land. Reading it was like going on a pleasant stroll with helium balloons tied on after finishing a grueling marathon weighed down by lead weights. Chesterton's prose is effervescent and effortless. It was a joy to read.
Based purely on plot this book might be called a spy thriller, but it's really nothing of the sort. The main character is a policeman (taking the identity 'Thursday') infiltrating a cell of international anarchists, and his key question revolves around the identities of those around him; who are friends (other police informants) and who are foes (real anarchists)? The answer will become obvious fairly early on to the attentive reader, who will then have a completely different burning question: what is the motivation of the man named Sunday? After finishing the (fairly short) novel, I felt like the answer was in there somewhere but that I had missed it somehow. The ending becomes rather surreal (I would compare it to Zoran Živković's The Bridge, which is the most recent surrealist tale I've read), and I felt (as I generally do with surrealism) that it went over my head. Still, I definitely want to read it again in a few years, to get a different perspective on it. It stands well with those novels that will reward second readings.
I had previously read a collection of Chesterton short stories, and this novel continues a pattern I'd noted in those stories: generally speaking, Chesterton doesn't write about things that are impossible or fantastic. However, the way he writes, his style, casts everything in a light of fantasy. He can describe perfectly mundane scenes in a way that makes them seem as exotic as Alice's Wonderland.

When Syme [Thursday] stepped out on to the steam-tub he had a singular sensation of stepping out into something entirely new; not merely into the landscape of a new land, but even into the landscape of a new planet. This was mainly due to the insane yet solid decision of that evening, though partly also to an entire change in the weather and the sky since he entered the little tavern some two hours before. Every trace of the passionate plumage of the cloudy sunset had been swept away, and a naked moon stood in a naked sky. The moon was so strong and full that (by a paradox often to be noticed) it seemed like a weaker sun. It gave, not the sense of bright moonshine, but rather of a dead daylight.

There is a perfect example in Thursday in the way he describes a man wearing dark glasses, and I think that this scene probably inspired Neil Gaiman's creation of the nightmare Corinthian in Sandman.

There was nothing whatever odd about him, except that he wore a pair of dark, almost opaque spectacles. It may have been merely a crescendo of nervous fancy that had gone before, but those black discs were dreadful to Syme; they reminded him of half-remembered ugly tales, of some story about pennies being put on the eyes of the dead. Syme's eye always caught the black glasses and the blind grin. Had the dying Professor worn them, or even the pale Secretary, they would have been appropriate. But on the younger and grosser man they seemed only an enigma. They took away the key of the face. You could not tell what his smile or his gravity meant. Partly from this, and partly because he had a vulgar virility wanting in most of the others it seemed to Syme that he might be the wickedest of all those wicked men. Syme even had the thought that his eyes might be covered up because they were too frightful to see.

Neil Gaiman is one of the reasons I picked up Chesterton; he name-drops the man and his works often throughout Sandman, and cites him as an influence in many interviews. Again, reading Chesterton you get a glimmer of Gaiman's approach to the fantastic, and esepcially how the fantastic and the mundane co-exist, something Gaiman makes explicit in works like Neverwhere. Chesterton's works generally, and The Man Who Was Thursday specifically, hold up very well over time. Even as their immediate subject matter fades into history, the prose style and general attitude continue to enchant.
Posted by Karen Burnham at 13:01

I remember thinking that Sunday represented God in one of his wilder, more inscrutable forms, but I wouldn't want to try to defend that thesis. Great book, regardless.

Glad you've found a few moments to remind me how much fun GKS is.

I've been working my way through the Father Brown stories over the last few years and many of them provide rich insight into the alien world of a century ago. For example, there is plot point in one story concerning how invisible a man in bright red livery is - and it was quite an effort to realise this was the Postman's uniform at the time!

Must add "Thursday" to the pile!

Tim - I'm pretty sure you're right, especially given the extent to which Chesterton carefully re-defined anarchism to suit his own purposes. I just can't quite get at what he was gettting at specifically, if you see what I mean.

Duncan- I'm glad you've been enjoying the Father Brown stories! I keep hoping to pick those up someday. There's also an almost steam-punkish quality to reading about that time, isn't there? At least, there is with Chesterton.