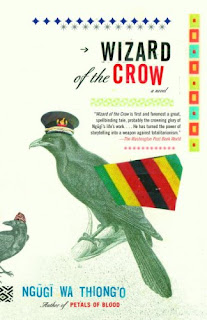 The Wizard of the Crow by Ngũgĩ wa Thiong'o is exactly the sort of thing I was looking for when I started casting my sf/f net wider into international waters. The author is Kenyan, exiled from his homeland after having spent too much time in jail. The book tells of a fictional African Ruritania, named Aburĩria, which shares the same problems seen throughout Africa: a power- and money-hungry dictator who rules through fear and cronyism. The main characters are everyday sorts of people, the sort of people who would be middle class if there were a middle class to speak of in this country. This book is both funny and sharply satiric. It opens your eyes to problems elsewhere seen from a native point of view, not from an imposed Western one. It is fantastic, i.e., there are magical elements in it, but they spring from a totally different tradition than what we're used to.

While the plot is unsummarizable, let me at least give you a flavor. The two main characters are the eponymous Wizard and his friend/companion/lover Nyawĩra. However, the Wizard isn't actually a Wizard; at least, he didn't start out that way. His name is Kamĩtĩ, and he's a college educated man. He earned a degree in India and returned to his homeland to seek work in the big city, Eldares. However, no work can be found and one employer even actively goes out of his way to mock him. As we are introduced to Kamĩtĩ, he has descended to alcoholism. Through various coincidences, he ends up running from the police with Nyawĩra, and to shake the cop off their trail, he poses as this Wizard of the Crow. The policeman completely buys the ruse, and in fact comes back the next day to ask for magical career assistance.

Thus begins Kamĩtĩ and Nyawĩra's journey. Although he's not out for money, Kamĩtĩ ends up being very good at what he does, using his knowledge of psychology and traditional herbalism to genuinely help people. He's so good, in fact, that he becomes a minor threat to the Ruler, the absolute dictator of the land. On the other hand, the Ruler also wants to try to harness the Wizard's power. Nyawĩra is a modern woman, and involved in the socialist opposition party that has made various public protests against the government. She is both savvy about harnessing people power and also at great risk of being arrested and disappeared. She sees the potential in the Wizard’s precarious position.

Through it all appears a wide and diverse cast of characters: government ministers competing for the Ruler's favor and carrying out their petty power politics, industrialists hoping to make huge amounts of money in bribes through international aid projects, religious figures, wives, police, people on their way up and people on their way down. Most of the governmental plots are driven by the proposal to build a sort of Tower of Babylon in order to honor the Ruler. The project is called Marching to Heaven, and the idea is to build a tower in Aburĩria so high that it reaches outer space. They hope to secure World Bank funding for this as an employment project. Just the hint that jobs may be in the offing cause queues of job seekers to form spontaneously throughout the country, and the fluctuating government attitudes towards the queues (They're a positive symbol of the people's love for their ruler and should be encouraged! They're a negative symbol of the unemployment problem in the country and must be banned!) exemplify the incoherence of rule by corrupt dictators.

The study of the Ruler and his policies reminds one of the corruption seen in the court of Caligula as depicted in Robert Grave's I, Claudius. The Ruler himself is of course corrupt, also venal and completely unrestrained. However his corruption, and the fact that he encourages his ministers to fight each other, means that everyone lives in constant fear, out only for themselves, with no thought to benefit the country as a whole. It's a very instructive picture of modern corruption and the problems faced by some African countries. In fact, Ngũgĩ traces the entire history of the problem for us in various snippets, never resorting to info-dumping, but rather to story-telling: from the withdrawal of the colonial powers, the first rebel strongmen, then the second generation that succeeded them (mostly by being servile survivalists until finally seizing power for themselves; this is the stage in which we are introduced to Aburĩria), the Cold War dollars that flooded into the countries from America and Russia, then the withdrawal of Cold War dollars and the new ideas about promoting "democracy." While America tends to be the 800 lb gorilla of the story—much of the plot revolves around getting American dollars and respect—this comes from an African perspective and not an American one—very refreshing. One instructive passage has the Ruler reflecting on what an American ambassador tells him:

In the days of the cold war, they used to shower him with praises for dispatching thousands of his own people to eternal silence. And now, even after he had assured them that he was ready to repeat what he had done for them, they were lecturing him about restraint and the new global order! He now stood on injured dignity. He had to show his ministers that he was not afraid of the special envoy, even if he was an emissary of the West.

Ngũgĩ takes it even farther: although Kamĩtĩ and Nyawĩra are somewhat successful—in harnessing the power of the Aburĩrian people, using their brand of 'magic' to make their lives a bit better, and surviving themselves—the ending is not pie-in-the-sky happy. Changes of power do occur, but once a country gets so mired in corruption and dictatorship, it is not possible to easily transform it into a functioning democracy, even if there are educated people who desperately want to make that happen. This gives a sobering view of the potential for American involvement in the world--not a rebuke of any specific American policies, but simply a more nuanced and realistic view of the way the non-American world works.

Now, a lot of the magical/speculative elements of the story support the satirical elements. One minister gets his ears enlarged to sycophantically show the Ruler that he will be the "Ears" that hear everything in the country, another gets his mouth enlarged so he'll be the Ruler's mouthpiece. The Ruler begins physically expanding like a balloon at one point, also losing his voice, which the Wizard is called in to deal with. There are out of body experiences and religious experiences and various magical coincidences. Sometimes the Africans are shown to be rather stupidly superstitious, especially some of the low-level government buffoons, but (again with the nuance) it is also shown how authentic African ways of thinking can be harnessed to encourage people to act, to organize, and to live better lives.

Wow, all this and I didn't even touch on how he depicts the challenge of supporting women's rights in a country where a man's power to beat his wife is considered a fundamental aspect of his masculinity.

This is a very long, very dense book, but it’s never boring and it's often funny. Ngũgĩ has a sharp wit and incredible depth of knowledge. There's something interesting happening in every scene. I learned more from this book that I would have from hundreds of newspaper articles, and I feel that it has an authenticity that those articles might have lacked. I hope that this book will be widely read, and I hope that it will get some play in the genre community. We're completely familiar with using Western spec-fic to comment on Western sociopolitical issues; I hope readers will take this opportunity to read African spec-fic being used to comment on African issues.
Posted by Karen Burnham at 09:51

Thanks! I've blogged about it a couple of times, mainly due to it winning the Tähtifantasia Award at Finncon last year, but I've never seen a copy. Must try to find one.

Cheryl- Thanks! I think your comments are one of the reasons I picked it up. I imagine you would like it quite a bit. I got mine through Amazon, I don't think I've ever actually seen it in a bookstore.