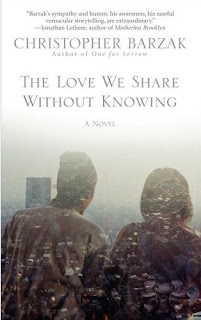 I've got a review of Christopher Barzak's The Love We Share Without Knowing up at SFSignal today. It's a lovely book, and you should definitely read it, but I'd also like to do some extra musing on this book, Nicholas Royle's The Enigma of Departure, and Samuel Delany's Starboard Wine (a review of which may appear in the next issue of Fruitless Recursion).

In Starboard Wine, Samuel Delany lays out a theory of how Literature differs from Paraliterature (his term for genre fiction in this context), and why they need to be judged differently. He includes some fascinating historical and theoretical background, but for my purposes his main point boils down to this: Literature focuses on the 'subject,' the subjective experience of the world, where 'the world' is taken as given and more or less immutable; whereas Paraliterature focuses on the 'object,' i.e. the world built specifically for the story.

Now, we can see that not everything called Literature fits this mold. Especially before the reigns were tightened post-Henry James, books like Les Miserables have characters interacting rather vigourously with their world. And of course, in Paraliterature, we can see some deep and rich subjective experiences of these made-up worlds. However, this argument overall struck me as quite convincing, and it helped crystalize something that always bothered me about so much modern Literature: character actions can only affect themselves and their relationships; not the world around them. Thus when reading things like Catcher in the Rye, the 'protagonists' may strike the reader as insufferably passive (at least, if you're used to the conventions of Paraliterature). Likewise, if you're used to the conventions/protocols of Literature, you may wonder why the heck you have to wade through all the 'irrelevant' world-building/info-dumping to get to the 'important' stuff, i.e. the character's inner state.

OK, so now I'd like to use this position to examine two books, Love We Share and Enigma of Departure. If you look at my reviews, you can see that I quite like the former and didn't like the latter at all. Now, there are reasons of craft that influence thoses stances, but I think that the core of the matter may come down to the fact that I approached them both as Paraliterature, but Enigma may in fact be Literature.

Prima facie, that doesn't have to be true. Both books partake only lightly of the fantastic, and both focus strongly on the emotional states of their characters. However, Barzak is constructing a world for us, and that world is explored with depth. It's just that instead of a made-up world, he's showing us modern-day Japan. Perhaps for a Japanese reader this would be closer to Literature, but given that Barzak is clearly writing for a Western/American audience, he engages in world-building with his foreign country just as much as any sf author must build a future. We read Love We Share as much to experience a world that is fundamentally different from our own as we do to engage with the characters.

In contrast, Enigma does not engage in world-building, even when it travels to foreign lands. Venice in this novella is strange, but it is strange atmospherically, not concretely. We can't be sure how much of the strangeness comes from its foreignness, how much from the intrusion of the fantastic, and how much from the protagonist's messed-up mental state. We're never grounded in the world that the protagonist moves through, because the story isn't in any way about the world (i.e. the object); instead it is completely about the subject and how he relates to death and art. While I found that to be annoying, I think that's probably at least in part due to my incorrect expectations (although I think that the Paraliterary expectation is forgivable: the book is published by PS Publishing and was sent to SFSignal for review). Not to say that the book is perfect as Literature; I still think it has some issues, especially in its own expectation of its audience. However, I think I may have judged it unfairly by standards that weren't appropriate to it.

I have to say, so far I've found Delany's Literature/Paraliterature stance to be very useful in examining what and how I read. It also seems to be less prescriptive, and doesn't weigh down its arguments with value judgements about which one is 'better.' However, I'm aware that this is new only to me; Starboard Wine came out in 1984. I'd be curious to hear the perspectives of people who dealt with it much earlier; I wonder how it's standing the test of time.
Posted by Karen Burnham at 09:34

The distinction may well be useful, but it also says loud and clear that "paraliterature" is *not* literature.

Cheryl- Well, yes, but that only matters because other folks have weighted down 'literature' with their own value judgements; i.e. they've said fiction is either literature or crap. Delany seems to be saying that yes, sf/f is different from literature but it is not crap any more than poetry is crap because it is different than prose. (In fact, he uses that exact analogy.) You just need to appreciate the difference.

I'll admit, though, that the "Paraliterature" tag isn't my favorite, but with the possible exception of 'genre lit' I haven't heard one that I like any better.

That's particularly interesting as a follow-on from your struggles with what made Incandescence interesting. The idea of "subject" and "object" gives us two dimensions for plotting where a book sits - with Incandesence being low on the "subject" axis and high on the "object" axis. Does this mean, though, that the perfect book would be high on both axes?

There is also the question of intent as well as effect. I think Egan is comfortable with focussing on object - but can you make any suggestions on what Royle and Barzak were up to?

Dang - I'm now going to have to go and read a book you didn't like to find out what I see in the light of your musing.

Duncan - Lucky for you, The Enigma of Departure is a novella; I read it in about 2-3 hours. ;)

Re: Axes, I think you can have "perfect" books at any point on both axes. It would depend on the execution and the effect. In one of my posts about characterization, someone pointed out that more realistic characterization wouldn't make Animal Farm any better, for example.

I think Egan is comfortable with focussing on object - but can you make any suggestions on what Royle and Barzak were up to?

Well, OK, if you twist my arm... I think Royle intended to focus purely on subject, and only included fantastic elements as a way into a character's internal state of mind. Barzak I think found a nice balance, high on both axes. He has to be more focused on the object because he's helping describe Japan to a Western audience, but he also wants to show how people relate to each other within that world.

Oh, I feel like the ghosts of Masterclasses past are going to come and smite me now. >:-0

I got around to reading "Enigma of Departure" a few weeks back. As it was months after your post, your review wasn't in the front of my mind anymore, which gave me a pretty clean run at the book.

I have to agree with what you say about the book being very much about the subject rather than the object. The (intentional) inconsistency of some of the material makes it clear that the story is primarily a representation of inner conflict. The result is that we (I) can't be sure whether any of it is real, even that the Manchester Ship Canal has/had the remarkable reality which the book describes, as so much of the protagonist's reportage is undermined. The result is this work is more an interesting portrait of a mind in collapse than a description of any reality.

So, yes, I agree on "Enigma of Departure" as piece on how the subject relates to death and art. Mind you, I don't think we got much more than musings.

PS: I didn't find the references to artworks mattered more than the vague descriptions of Venice - but I happen to have been to an exhibition about the Italian Futurists this year, so I guess I had a peg to hang the pictures on.