A Walk on the Quirky Side 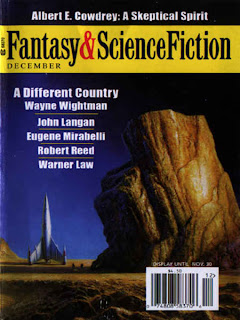 December’s F&SF shows off the magazine’s quirky side. First up: “A Foreign Country” by Wayne Wightman. In it, a third-string reporter gets assigned to cover one of the nut-job third party candidates in a Presidential race. The candidate, Faber, wanders around the countryside, talkin’ to folks, eating lots of food, and promising “happy times” ahead. To the shock of everyone not reading the story, he actually gets elected. And he makes the reporter/narrator his chief of staff. Faber doesn’t appear to actually do anything except eat; the reporter has to make up all sorts of stuff to tell Congress. But then things get really weird: people, usually unpleasant people, start disappearing. And then folks start to forget all about the unpleasant people, so they’re not even disturbed by the sudden absences. The reporter is going nuts over all this, but only finds one other person, also a reporter, that is similarly upset. Faber won’t answer any questions directly. The ending feels a little old-fashioned once you finally glean what’s probably been going on, but over all I enjoyed this little Twilight Zone episode.

Completely different in both tone and subject matter is “Fallen Angel” by Eugene Mirabelli. Set in 1967, an angel comes crashing through this guy’s roof. She’s messed up and has a hell of an attitude. He becomes devoted to her. The story centers entirely on their relationship, as screwed up as they both are. Its got sex, drugs, and rock n’ roll, and it’s very intense, especially since it’s set entirely in a studio apartment. The sense of claustrophobia is pervasive. It doesn’t end easily, either. There’s an extent to which the speculative element is almost unnecessary—this story could have been written almost as well about any two fucked-up young folks; but the intensity of this story stays with you. Another one to remember come awards time.

“Leave” by Robert Reed examines attitudes towards war. The story centers on the son of the narrator and his wife’s best friends. All the adults were peace activists back in the day. The other couple has a son who turns out to be quite a golden boy; as such he risks being recruited for a secret alien war. The background of all this is fascinating: people who had disappeared years ago start returning, telling stories of an alien conflict out in space, sometimes even with artefacts. It’s also a good character portrait on several levels. Golden boy himself is almost incidental—the center around which everyone else revolves—but his parents, his sister, and the relationship between the two older couples are well-drawn. In the end we get a brief glimpse of the boy and his motivations on his way out the door, and then the narrator has to decide what to tell the parents. As endings go its not terribly challenging, but this does strike a well-thought-out note on its theme of how different people feel about wars and how that can affect relationships.

This year being F&SF’s 60th anniversary, they’ve been running some classic reprints; not the stories that get anthologized over and over, but the quirky stuff that perhaps younger readers haven’t seen before. “The Alarming Letters From Scottsdale” by Warner Law definitely delivers the quirkiness (the intro refers to it as ‘demented charm’). Told in epistolary form, it involves letters between a publisher and a popular mystery author. The writer has recently picked up a dog, and becomes increasingly obsessed with the animal. The dog may be a reincarnation of another writer, perhaps it’s a muse. The letters get weirder and weirder. The publishers try to get help to the author, but it doesn’t end well, either for the author or the dog. Yet the way Law writes, it’s funny even while you’re feeling bad for the dog. I have to say: nice choice on the part of the editors.

Albert E. Cowdrey, who is on my list of authors to watch, contributes “A Skeptical Spirit.” Set, as usual for Cowdrey, in the South, this story deals with a spirit researcher who takes up residence in a haunted house. He gets to know all the spirits with the help of his house-keeper, who runs seances. However, one of the former inhabitants of the house causes serious problems, not least of which revolves around the fact that the spirit, having been a skeptic and an atheist in life, cannot now believe that it is dead. Not central to the story, but pervading its every scene, is a depiction of race relations and how they’ve changed over the last century. There are still obvious race and class boundaries in the modern day, but compared to what the old spirit was living with, it’s an amazing difference. This story isn’t award-worthy in the way that “The Overseer” was earlier this year, but it will make a fine addition to the eventual collection of Cowdrey’s short fiction that I hope to see someday.

Finishing off the quirky for the issue we have “How the Day Runs Down” by John Langan. This is his contribution to John Joseph Adams’ zombie anthology of 2008, The Living Dead. This story has the oddest structure: it’s written as if describing a play, with the stage manager on stage, narrating different vignettes to the audience, with stage, lighting, and sound-effect cues thrown in. It’s incredibly effective, and although I’m not a huge zombie fan I really appreciated this story. It’s especially impressive as the fourth wall between the action and the audience gets progressively thinner. Langan has a masterful command of atmosphere and tone in this story. This is one that sticks with you, possibly award-worthy. In fact, it makes me want to read some other stories in Living Dead to see if there are other gems like this that I might have missed.
Posted by Karen Burnham at 16:09