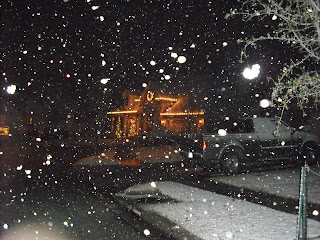 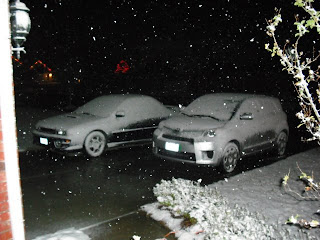 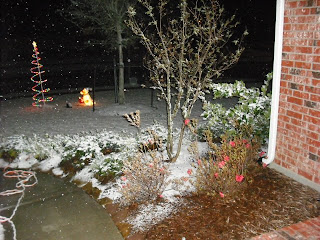 So, when we moved here, we asked about snow. And they said, "Oh it snowed once like, thirty years ago. It doesn't snow in Houston!"

We beg to differ.

And as you'll see from the daylight picture, some of it is still around this morning!

Of course, when we moved here last year they also said "Houston never really takes direct hits from hurricanes!" So in retrospect, we should have been buying snowshoes. 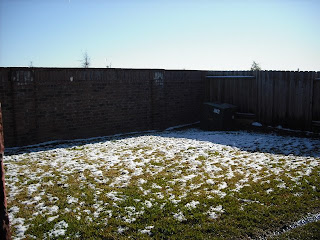 I'd say we were lured here under false pretenses except for one thing. Everyone also said, "You'll love it here except for the weather!" And we do.

In other news, I'm leaving on some hastily arranged travel today. My father's in the hospital in central Arizona, so I'm heading up to help out. It doesn't look life-threatening so far; his pacemaker went off a few times and upon further examination they found some blood-clots hanging out where they oughtn't. Still, I'm glad to go up and cheer folks up and help around the house as needed. I should be back in Houston on Tuesday, preparatory to my final exam on Thursday night. While I'm there I'll be away from high-speed internet connections, so I'll be less responsive to email and comments than usual.
Posted by Karen Burnham at 09:46