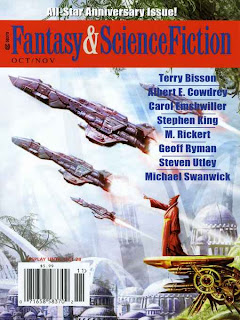 When I titled my last post "Good Writers Doing Good, but Unexceptional, Things" I should have added: "Except Geoff Ryman." The only excuse I can think of for forgetting his story: once I had noticed a theme of unexceptionality, I mentally sorted "Days of Wonder" into a different category and never got back to it. I found this story unique and perhaps award-worthy. It's almost impossible to review this story without spoilers; the story is set up in such a way that watching the worldbuilding unfold is almost as dramatic as the character arc. So if you want to experience this story untainted by me, go read it now.

For the rest of us: in the far, far future, humans are gone. However, we leave our legacy in a large number of genetically engineered beings. Most of them have drifted far away from humanity, carrying only bits and pieces. Most of the action centers around a tribe of "horses." They're a long way from our horses: they groom, they're matrilineal, they can do primitive metalworking (with the help of the squirrels) and they can use weapons. They walk on four legs sometimes and two legs when needed.

One member of this tribe, Leveza, is much closer to us than usual. She mates for love, not randomly; she walks on two legs more often and has a shallower face. Her child is born mostly helpless instead of jumping up and running around within the first day. She is also inventive. These differences cause her a lot of friction with both the narrator, her partner, and the more traditional elements of their tribe. [Exercise for the reader: compare and contrast Ryman’s treatment of Difference in this story and The Child Garden. I can’t do it, I’ve got finals coming up!] Things come to a head when they start their annual migration and have to deal with the big “cats” that prey on them. Leveza doesn't simply kill them and/or leave them be, she actually captures one and learns from it. This does not sit well with the rest of the tribe at all. Even her own partner worries about this trend. Leveza transgresses custom after custom, until she is finally kicked out of the tribe altogether. We learn in a sort of coda that she turned out alright--certainly she has a worthy goal to work for, reuniting the species and all their disparate knowledge. However, she makes deep sacrifices, all deeply felt.

This is an intense story, both on the part of the protagonist and the narrator. The basic story of a tribe member becoming an outsider isn't new (that one's as old as time), but this is a particularly interesting take on it. I found the world-building to be particularly good as well, both plausible and oddly surreal. One quibble is that it drags in the middle, during the long migration, as the main character begins to split from the tribe. I think some scenes could have been cut or described more briefly to move things along faster. However, between the world building, the characterization, and the deep treatment of its theme, this story more than makes up for any minor problems with pacing.
Posted by Karen Burnham at 15:35

Your review says you read M. Rickert's story "Evidence of Love..." somewhere else. Do you remember where? To the best of my knowledge, its only appearance to date is in the Oct/Nov. issue of F&SF. If it has been published elsewhere, I'd be very interested to know.

Thanks---and thanks too for your posts about recent issues of F&SF. I value feedback of this sort and I hope you'll feel welcome over at our Forum, which is here: http://www.sfsite.com/fsf/blog/forum/

I've been wracking my brain and thumbing through various anthology ToCs, and now I can't figure out why I thought that. I started out reading it in order, and the premise seemed familiar, and when I got to the execution scene I really thought I'd read it before. I just assumed you'd picked it up on reprint like "Pump Six" earlier.

Could be just deja vu on my part, could be similar to other things she's written... now I'm not sure. Sorry if I caused you any undue strife!