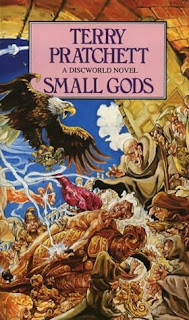 Here’s a cheerful review to lead into the holidays. Small Gods is the thirteenth book in Terry Pratchett’s Discworld series. I’m obviously quite behind (I only started reading Discworld in late 2006), but I’m eagerly catching up. I’ve found that when you pick up a Discworld book, you never know just what you’re going to get. Politics, celebrity culture, the magic of movies, tourism, capitalism, women’s rights, undead rights… you just never know. Small Gods tackles philosophy and religion head on.

Brutha is a novice in the priestly complex of an extremely overbearing religion. The god is Om, and the country is Omnia. They are absolutely nothing like the Catholic Church. They've got a Cenobiarch, not a pope, and a Quisition, not an Inquisition. See?

One day a tortoise falls into Brutha's garden and starts talking to him. The tortoise claims to be Om. It turns out that he's lost believers--everyone worshipping at the church of Om believes in the Church, not in the Great God Om, and gods dwindle when they're not believed in. Brutha is one of the only remaining people who truly believes in Om, thanks mostly to an overbearing grandma and a lack of imagination.

Given the somewhat madcap plotting of these books, I'll give you the quick run-down of the other plot threads: the Church is expecting the next prophet any day. The head of the Quisition has been setting himself up for it--he scares everyone. He plans to conquer Ephebe, the place that is nothing like Athens, that we've been to in other books (including one of my favorites, Pyramids). There's also a rebellion movement afoot in Omnia, one that believes that the world is not spherical, as Om proclaimed, but instead is flat and rests on the back of a giant turtle. During the Ephebe segment, the rebellion ends up with a couple of philosophers. One turns out to be an engineer who may end up regretting building engines of war, even in a good cause, and the other refuses to have anything to do with the lot of them.

That's a lot of plates to keep spinning, but by this point in the series Pratchett knows just what he's doing. He keeps them all going and ties them all together with ease. In the end, Brutha is as pivotal as you'd expect, and things generally turn out alright. Along the way, we see the deep power of true believers and how one is as bad as the next, and that people really should make their own ways without doing things just because "God said so" because usually He didn't.

Now, as it happened, I was reading the section in Ephebe at the same time I was reading Aristophanes’ The Clouds. Aristophanes was a playwright who lived at the same time as Socrates in Greece. His specialty was comedic plays, and Clouds is a direct hit on Socrates. In it, a man and his son have racked up some serious debt. They hear that learning philosophy, especially from Socrates, can help a man win any argument at court, no matter how unjust. First the man, then the son, goes to Socrates to learn. Socrates mostly doesn't want anything to do with them (especially the obnoxious father), but eventually teaches the son. As a result, the son ends up arguing convincingly that it is right and proper for sons to beat their fathers--so the father gets his just deserts.

While I am not the first one to note this, there is a distinct similarity in the outlook between Aristophanes and Pratchett. For one, while they mock, they do so with understanding and respect. The main philosopher in Small Gods is Didactylos, who lives in a barrel and says "Bugger" a lot. In general the Ephebian philosophical debates end up in fisticuffs. However, they do end up the wisest of the cast, especially Didactylos who opposes getting involved in the Omnian civil war. Likewise Socrates and his philosophy students in the Clouds say many silly things, about how gnats fart and various things about the gods. However, Socrates is smart enough to see the father off for a complete idiot, and at the end I felt that the Aristophanes’ moral is that even good things can be turned to bad ends by people who wish to use them that way—it’s not Socrates’ fault if some people use what they learn from him for less-than-perfectly moral purposes.

The other marked similarity between the two involves their contempt for pretentious pie-in-the-sky thinking. I read Clouds directly after reading Plato's Republic in which Socrates argues for all sorts of things that are impossible unless people somehow become perfect. It's this mash-up of highfalutin' thinking meeting everyday Joes that makes the Clouds so funny. Likewise, it's the meeting of a huge, all-powerful church and a very small god with normal folks like Brutha and Cut-Me-Own-Hand-Off Dhblah that generates much of the humor in Small Gods (and in most of the Discworld books). I'm not claiming to have discovered some eternal principle of humor here, but it's pretty neat to see two authors so distant in time and space having such similar wry views on human nature. They're not angry comedians, they're just bemused by people being people no matter what philosophers or priests think they should be. Will the Discworld books stand the same test of time that Aristophanes has (~2400 years)? I doubt Pratchett himself thinks so, but I rather hope they will.

Wow - what a great piece. You've got me gutenberging for Aristophanes already.

- and Small Gods is my favourite Discworld book, although I kinda stopped after about 20.

Thanks, Duncan! Aristophanes really is great--and he's easy to appreciate on many levels. He's one of the classical authors I was able to actually appreciate in college, but I feel I get him even better now that I have more background in literature and history.

I hope you & yours have a great Christmas!