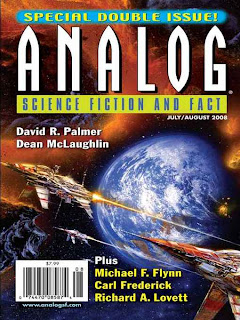 Analog did me a huge favor with this issue. It leads off with the first installment of a three part serial (“Tracking” by David R. Palmer) that I found so unreadable, I skipped it after only the first few pages. This means that I got through the double issue much faster, and I’ll get through Sept. & Oct. much faster as well. How bad is it? Told as if from diary excerpts, I present to you the first paragraph:

Yes, Posterity, your Humble Historiographer does feel guilty about this—but what was Teacher thinking? What did he expect? What else could I do…?

Who the hell starts their diary entries in media res? The second paragraph gets a little better:

But then it worsens:

OK, I need something amazingly amazing to happen REALLY fast to overcome my distaste for a person who self-describes as “Spunky” and “Plucky.” However, several paragraphs about breakfast don’t cut it, even if they self-servingly hint at but don’t directly get at the fact that she’s somehow the savior of her people. Throw in a faux-abbreviated-for-terseness-”diary”-style of writing:

This person doesn’t have time to write “from THE moment MY eyes opened today” but has time to write “Yours Truly” and speculate on retrocausaility? Seriously? I flipped to the end of the story; it uses that prose style throughout. While it probably says all sorts of things about the personality of the narrator, it’s really annoying to read. Thus it establishes the narrator as an annoying person I don’t want to read about. So I won’t.

Most of the other stories in this issue fulfill the acronym RUMIR that I lifted from a Joanna Russ review (“The stories are routine, unoriginal, mildly interesting, and readable.”) “Sand and Iron” by Michael Flynn reminds one of his Wreck of the River of Stars, with its dysfunctional starship crew—although that sort of personal dynamic doesn’t get as much play in a novelette. It’s a pretty cool story, with interesting alien artefacts, but it stops too soon. “A Plethora of Truth” by Bond Elam revels in taking pot-shots at televangelists—Real Year = 1988. “Let the Word Take Me” is a puzzle story with humans trying to figure out an alien language—it reminded me strongly of the Star Trek: The Next Generation episode “Darmok,” one of my all-time favorite Trek episodes. However, the TV episode was actually better because it lacked overbearingly stupid bureaucrats and arbitrary deadlines, plus it included aliens equally eager to communicate. “Junkie” by Maya Kaathryn is “Toy Story” meets “Galaxy Quest.”

The best entry is the concluding novella “Tenbrook of Mars” by Dean McLaughlin. In a way it’s a pean to the engineer hero—he’s an engineer, and managed to keep a colony on Mars alive for decades while it was cut off from most outside help. The best parts of the story are the slow revelations of the catastrophe and what exactly Tenbrook did, why, and how it worked out. It’s very gratifying for an engineer, and also a manager, to see Best Practices engineering management save the day. However, there’s also an odd flashback romance plot that may function as political commentary (it’s hard to tell)—it seems to serve mostly as padding. It’s a convenient way to end the story on an “emotional” high point, but it seems 100% contrived, and detracts from an otherwise solid story. “Tenbrook of Mars” is pure Campbell, but there’s nothing wrong with that when it’s done well.
Posted by Karen Burnham at 13:32

Palmer won an award with the original novel, same protagonist, 25 years ago. Tastes change, no doubt. It's not a skimming story, that's for sure. But there's a great deal of skill involved in getting that voice right.

Can't wait until you rip my story to shreds or dismiss it completely in the November issue!

November issue also has a VERY long letter from Palmer to a reader who wrote an opinion essentially equivalent to yours.

Oz- Thanks for the heads-up. I wasn't aware of the previous books; now the in media res beginning makes a bit more sense - it may be aimed at folks who already know the backstory.

I read Palmer's response; I hope my criticism was at least a little less rude than that printed in the Nov. issue. However, I'm not sure I can buy that the story "goes over my head" because I'm a "skimming"-style reader. I don't think I am. I will cop to having an antipathy to YA narrators, though--it's not a style that generally works well for me.

Palmer points out that the previous Candy books got tons of awards 25 years ago, and were appreciated by folks like Heinlein. That makes sense--the whole Spunky/Plucky thing reminded me of a Heinlein juvenille. However, I wonder how well that style has aged in 25 years--will it get as many awards this time around? Time will tell. The new YA anthology from Jonathan Strahan, The Starry Rift (which I reviewed for Strange Horizons) mostly had moved away from that style.

I'm looking forward to your story as I ever so slowly inch my way through my magazine backlog!

Your comment on juveniles and spunky/plucky is spot on, I suspect. I didn't read the original, though it may have been quite charming in its time. But tastes do change. And a style of speak that was "hip" then would sound wrong now, for the most part.

I must admit, while I read the opening page to compare it to the letter printed in Nov., it was not to my taste, though I thought the voice had been done with skill, a very strong voice. I'm a deep and slow reader, so obviously skimming was not an issue for me. I "hear" every word, which makes me outrageously slow. I just didn't find the subject immediately interesting, couldn't quickly find the heart of the story. My fault, probably. Or lack of familiarity with the original character.

So I was sort of in your boat, but thought it fair to point you to the letter and his response.

And do as you please with my story! It's out there. Stan bought it. I'm not going to look daggers at you if you don't like it. Hey, I'll just be thrilled if you read the entire thing.

I agree, the voice is quite distinctive and obviously exactly what the author was going for. It just didn't work for me.

It must be very challenging, continuing a series like that. Balancing "not boring the folks who read the originals" and "not confusing the folks who haven't" must be darn hard. Still, it's a good problem to have if you've already had a successful story sequence published, eh?