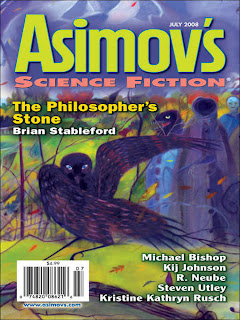 So I’m really behind, but I swear I’m catching up. I’m reading August’s stuff now, and it’s only the beginning of September! Lookit me go! Dated as it is however, I’d like to mention some things about the July issue of Asimov’s. Things in it may pique some folk’s interest, and some things I’ll want to remember around awards time.

First, a novelette titled “Lester Young and the Jupiter’s Moons” by Gord Sellar. It’s an alt history written in the first person. A 1940s jazz musician narrates, and he writes with the cadences and informal, slang-laden style of that time and scene. (In the introduction the author says he’s specifically mimicking the style of Miles Davis’ autobiography.) Here’s the opening:

His first night back on Earth after his gig on the Frogships, Bird showed up at Minton’s cleaner than a broke-dick dog, with a brand new horn and a head full of crazy-people music. He’d got himself a nice suit somewhere, and a fine new Conn alto. Now, this was back in ‘48, when everyone—me included—was crazy about Conn and King and only a few younger cats were playing on Selmer horns.

But it wasn’t just that big-shouldered suit and the horn; the cat was clean. I mean clean, no more dope, no more liquor, no more fried chicken. Hell, he was always called Bird—short for Yardbird—on account of how much fried chicken he liked to eat. This was like a whole different Charlie Parker. He was living clean as a monk. He was walking straight and talking clear. His eyes weren’t all fucked-up and scary anymore, either.

As you can tell, this 1948 is a bit different from ours. Aliens came down sometime around WWII and started throwing around money and tech. They hire human entertainers to perform on their intra-Solar System cruise ships, including the narrator. (Not just jazz entertainers—ballerinas, rodeo riders, trick shooters, can-can girls, you name it.) The aliens dose up the performers with some sort of drug that enhances play-back memory and also allows them to “blur.” (Phase-shift? Inhabit differing quantum realities simultaneously? The narrator doesn’t understand it, so we don’t get the full picture.) This allows for some crazy musical ensembles. However, the whole thing takes on a creepy and xenophobic air when one of the musicians reacts badly to the drugs. Amongst other side effects he loses his creative ability and can only perform exact playbacks; that’s death for a jazz man. The narrator orchestrates a working-within-the-rules rebellion to get out of their contract early. It’s a bit simple, but interesting both from an alt-historical point of view and as a story.

What really stood out for me was that narrative tone. If the antecedent hadn’t been stated right up front, I’m pretty sure I would’ve found it offensive. The language of the 1940s was casually racist and misogynist, and it’s not much easier to read even if the narrator is black. (Certainly in this alt-history the discovery of aliens hasn’t ushered in an immediate era of racial harmony.) Linking it to a known figure like Miles Davis made it much easier to swallow, and once you get into the rhythm of it it’s great fun to read. I’m wondering if that reaction, letting an outside source dictate the extent to which you can allow yourself to enjoy the story, is good-bad-or-neutral. Not sure about that one.

The stand-out story in this issue, the one to remember come awards time, is “Vinegar Peace, or, the Wrong-Way Used-Adult Orphanage,” a novelette by Michael Bishop. In it if your children pre-decease you, you get picked up by the government and stuck in an inverse-orphanage old-folks home. (After all, now you have no kids to take care of you when you’re old and decrepit.) The place is surreal, having several different areas with different purposes. There are different ways to mourn; the Cold Room is a particularly intense and horrible metaphor. Despite the over-the-top satire and surrealism (the protagonist’s kids died in the “Worldwide War on Wrongness;” some of the rules at the “Orphanage” seem as random as Terry Gilliam's’ Brazil), this is a moving depiction of the grief a parent feels at losing an adult child. The story intensifies when you realize that Bishop lost his son just last year. Jamie Bishop was killed in the Virginia Tech massacre, April 16, 2007. Jamie was 35.

The story makes progress towards some healing, at the end. It moves through confused anguish, towards a reasonable adjustment and accommodation with the knowledge of tragedy. That’s not to say that it ever becomes OK, but perhaps that it becomes livable, survivable. Given that Bishop is the voice of tragic experience here, it’s particularly reassuring. This is an amazingly written story that I hope doesn’t get overlooked.

There’s also a cute short story in this issue, “26 Monkeys, Also the Abyss” by Kij Johnson. I enjoy her writing quite a bit. Her use of animals to tell tales that illuminate human characters was also on good display in the 2003 novel Fudoki. “26 Monkeys” is a story about a troop of performing monkeys that move from owner to owner. The monkeys know the magic trick, the human just enables them. It’s a fairy tale sort of story, but a nice one. Although it feels familiar, it is also unique.

Finally there’s the latest installment in Brian Stableford’s series of stories set in an alternate early Elizabethan world. Each one claims to be a stand-alone; this one is a novella titled “The Philosopher’s Stone.” This is the third one that I’ve read, and it most seems like part of a novel. I suspect that we’ll see all of these together in a book someday. The conceit is that several of the best minds of the era built a working ether ship in the mid-1500s, sailed into space and met aliens. There are many alien factions, and humanity is about to get caught up in their conflicts. Upon their return to Earth, the various luminaries can’t agree on how to move forward: one believes it was simply a dream, another goes off to do experiments elsewhere, yet another tries to agitate for human politics to become engaged with this implausible threat from beyond (a difficult sell while Protestants and Catholics are at each other’s throats throughout Britain).

In this installment Edward Kelley accidentally/fortuitously winds up with an alien artefact. The artefact tells him that he has to get it to John Dee, the famous alchemist (and one of the original ether ship sailors). After tribulations, Kelley completes his mission and finds not only Dee but also Giordano Bruno, the famous Italian heretic. (Kelley’s reputation as a Con man doesn’t help matters.) The Queen’s religious purist squad captures all of them, but the artefact reveals some of its powers and gets them freed. Kelley is now deeply enmeshed in plots that go to the highest levels, up past mere monarchs and into lofty dimensions. This is a fine story, but it felt like its main purpose was to move pieces around, getting them set up for the next set-piece in the sequence.

The whole series is a bit odd. One needs a significant amount of historical knowledge to really appreciate it. I felt reasonably conversant with this time period, but I had to keep running to Google and Wikipedia to see me through. It will be interesting to see how it all ties together in an overall narrative eventually—it may end up being simply too esoteric for its own good.
Posted by Karen Burnham at 21:09