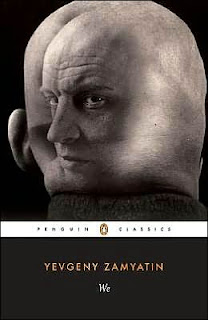 In my stroll through the classics, I feel like I've gotten my fill of utopian literature, now thankfully out of style. However, in reading Yevgeny Zamyatin's We (1921) I filled in a gap in my dystopian literature library. I've read 1984 (1949) and Brave New World (1932) of course, and also "The Machine Stops" by E. M. Forester (1909 -- a brilliant short story, if you're interested). We stands out both for its power and also for its context: an early supporter of the Communist revolution in Russia, Zamyatin quickly realized the abuses that were being perpetrated by those in power. This work is a reaction to those abuses and a classic "If This Goes On--" style warning. However, it couldn't be published in the author's native land. It was published first in English after being translated. There was an attempt to sneak it into Russia by selling a version supposedly translated from the Czech, but the book had already been banned. Apparently it wasn't published openly in Russia until 1988. Zamyatin himself was forced into exile in France starting in 1931. Those very real experiences add a lot to the power of the novel.

The novel's narrator is D-503, the chief engineer of the first interstellar space ship. He lives in a completely controlled state, the United State: one government, a walled-off nation, no privacy, everything timed down to the minute. Because of his prominent role, he is targeted by the female head of a revolutionary movement, I-330. He falls in love with her and becomes very confused--anything that happens unpredictably throws him into complete cognitive estrangement. Up until the events of the novel, his life had in every way been circumscribed and regimented. This is probably the main strength of the novel, to intensely show how someone raised under state control would be completely thrown by even the simplest unpredictable event. He doesn't understand what he is feeling for I-330, he doesn't understand what her motivations are, and he often tries to run back to the comforting regularity of the state. He is the opposite of the Competent Man--because he was never allowed to become one. This can make him a little annoying to read: in both narration and dialog he often stutters, there are many ellipses, and at times he becomes completely unhinged from reality because he cannot reconcile what is happening with what he has known. It is both effective and disconcerting to read.

He and I-330 manage to meet in a somewhat secret meeting-house outside the city and sometimes in their quarters in the city. Brief periods of privacy are allowed for each night for couples to have sex, and they take advantage of those times. D-503's relationship is made even more complicated by the needs of his former sexual partner, O-90, who wants desperately to have his child, and the unwanted attention of U-, an ugly woman who can foil his plans. While D-503 is obviously a very intelligent engineer (many of his metaphors are explicitly mathematical; this reminded me of Stanislaw Lem's The Cyberiad and also reminds one that Zamyatin was trained as an engineer in Russia), almost everyone in this book seems to have figured out what is going on politically except him.

D-503 becomes more or less incapacitated by what is going on. He goes to a doctor, who may be sympathetic to the rebellion, and is diagnosed with having developed a soul. Apparently he's not the only one; to combat the epidemic, the United State (headed by the "Well-Doer") orders mandatory lobotomies for everyone. During this time the interstellar ship Intrepid is launched, but the rebellion faction who hoped to take control of the ship is thwarted by agents of the state. D-503 is unaware of his role in tipping off the state to the takeover attempt. The end of the story, as we expect from dystopian literature, is not happy for anyone.

This book uses many of the tropes that ground the dystopian subgenre: numbers instead of names, state control through panopticon, euphemisms for horrific things, awareness of media propaganda (sometimes newspaper articles are included in the text), and a protagonist encouraged to challenge the system because of romantic love. One thing that I found interesting was that the system of state control was based on Taylorism--the first 'scientific management' system meant to maximize the output of workers. This is something we would today associate with a corporate/capitalist dystopia instead of a Communist one. So instead of having the sacred Time Tables of the United State based on a WWII fascist "make the trains run on time" idea, they are instead based on a broad expansion of labor efficiency management principles (which are often misapplied and inhumane even today).

I can't say that I liked We. Dystopian literature isn't usually the sort of thing that one enjoys. However, I appreciated the power of the narrative and the techniques used to convey it. It is a very effective piece that I think illustrates cognitive dissonance or estrangement about as much as anything I've ever read. If you only read two dystopian novels, I think they would still have to be Brave New World and 1984, just because they are such touchstones in the West. However, if you read three such books, I would recommend that We be the third.
Posted by Karen Burnham at 12:14

I really like We. It's a better novel than Brave New World, if not as prophetic. I remember the State's listening devices being literal ears--that creeps me out for some reason.

Interesting stuff, keep meaning to re-read We, actually. I last read it when I was going through an "influences on 1984" phase. Incidentally, have you read Jack London's The Iron Heel?

"This is something we would today associate with a corporate/capitalist dystopia instead of a Communist one."

Your mention of Taylorism struck a note with me just now, actually as I'm currently reading Francis Spufford's Red Plenty (it's very good, btw). Of course, you get the usual "different sides of the same coin" kind of arguments when discussing any conflict involving the Soviet Union, but it's worth remembering, I think, that the USSR was trying to compete directly with the United States and moreover (obviously not all - you'd be hard pressed to defend, say, Stalin) they did this through attempts to implement the kind of time and motion study influenced efficiencies developed in the US. There's a nice part early on about that when Khrushchev visited the US in 1959 which expands on this a wee bit.

I picked up We after seeing it on the shelf at my local Barnes and Noble and was surprised by how impressive the novel was. I was sucked into the story and devastated by the choices made by the protagonist in the end, despite knowing that it had to end that way. I think it is an impressive story that holds up well today and would recommend it as a must read to anyone who wants to sample the best of this subgenre of sf.