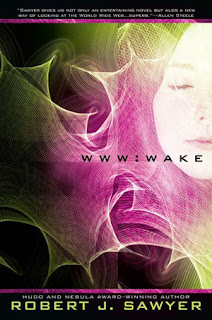 It's fun to think of intelligence as an emergent property of complex systems. And we've been thinking about it for decades. From The Moon is a Harsh Mistress (1966) to (ghod save us) the 2005 movie Stealth. The latest entry in the Internet-develops-intelligence genre is Robert J. Sawyer's WWW: Wake, the first book of a proposed trilogy and a 2010 Hugo nominee for Best Novel. As with most Sawyer books it is a solid, fast read with some interesting speculation--but ultimately it feels a bit like cotton candy.

At first the story focuses on Caitlin, who was born blind. She is 16 and navigating high school in Canada. She's an internet addict and math whiz: posting on live journal, instant messaging, doing her homework and research. A researcher in Japan contacts her. Because of the specific (and very rare) nature of her blindness (her eyes receive light properly, but the signals are not correctly interpreted by her brain's visual center), he believes that she is a good candidate for an experimental technology. He'll implant a sensor to record the signals from her eyes, process them, and feed them back into her visual processing center.

It doesn't work at first. She goes back home with the signal processing unit installed and open to the internet so that it can download updates as the researcher pushes them out. At a certain point, she gets an update and begins to see... the internet. Nodes and lines of connections of different weights and colors. Obviously this isn't what her parents were hoping for, but she's pretty stoked--it's the first time she ever seen anything.

From the beginning of the book, in the interstices between chapters, we get hints of a consciousness emerging... somewhere. In China, a nascent epidemic causes the government to go in and kill everyone in a specific rural geographical region. While they're implementing this cleansing, they shut down the Chinese communication connection to the rest of the world, blocking the three main internet and telephone cables that bring data in and out of the country. We see the perspective of the Chinese premiere and a Chinese human rights activist as this is happening. The emergent Internet intelligence is very confused--first feeling lessened, then being reconnected to itself. It begins to form the concepts of Self and Other and that there are external things that effect its existence.

You can possibly see where this is going. Caitlin can see the internet, and the Internet can see her. Eventually they make contact, and things go from there. There are a lot of cool things that Sawyer brings up as the book rolls to the end (although not the end of the story; remember that Sawyer is setting up for two more books). There's the way Caitlin learns about her sight, and the internet learns about the world, and some fascinating stuff on signal processing, information theory and various mathematical techniques. The technobabble that hit my specialty (neuroengineering and signal processing) was all within the realm of possibility. There's certainly enough hard sf meat there to satisfy the Analog crowd. And frankly, I'll forgive a lot just to read about an AI learning about the world via Wikipedia and Project Gutenberg.

I guess my main problem with this book is that it feels a bit slight: everything seems to come a bit too easily to both Caitlin and the emergent AI. Everyone in this book jumps to conclusions that just so happen to be correct at various times. Things happen much faster than seems realistic, especially with the blindness research. Wake's focus is so narrow that this near future doesn't feel as fleshed out and lived in as I'd like (although it was fascinating to read about the technology available today to help blind people navigate school and work). I was also disappointed that after we'd spent the first third of the book with the Chinese plot, once the Chinese reconnect to the internet all those characters are unceremoniously dropped, never to be heard from again. What were the consequences, both international and domestic? What happened to the human rights activist, last seen breaking his leg attempting to escape from the police? I can only hope that they'll come up again in the remaining two books, but considering this book as a standalone it seemed like their only purpose was to teach the Internet AI an Important Life Lesson, and after that their stories weren't important anymore. Really a shame, because I was really hooked by that plotline and how it showed the interconnectedness of the modern world.

All in all, this is another solid but somewhat old-fashioned entry from Robert J. Sawyer. I expect that it will be a strong contender for the Hugo; it has many of the same elements that appealed to voters in his previous nominee, Rollback. It's got some excellent science speculation and a fun plot, but its world-building feels thin and the hand of the author can be rather clearly seen nudging the characters onto the right speculative tracks. A good solid read, but not exactly cutting-edge sf.
Posted by Karen Burnham at 20:45

I had the same problems with Wake as you did, I'm used to Sawyer giving more depth, more exposition, just more. Was Wake maybe meant as young adult? If that's the case, I can excuse it's "lightweight" feeling. the 2nd book in the series is out, have you seen it?

I've seen the 2nd book, but I wasn't planning on picking it up. The only thing that would really draw me back is if it started to focus on the Chinese dissident situation. I still feel like it was really mean to leave that character lying there, with a broken leg about to be arrested, and never go back to him. Ouch!

With a YA protagonist, I guess you could read this as YA. But it doesn't feel as different from Sawyer's usual work as I'd expect in that case. I'm thinking of the comparison between Cory Doctorow's "Down and Out in the Magic Kingdom" (adult) vs. "Little Brother" (YA) --totally different tone, language, plotting, etc.