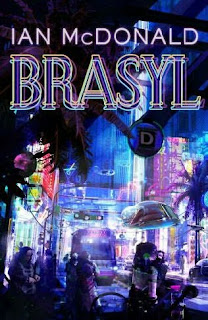 So, now that I've outlined what I want from my speculative fiction, I need some examples. Is there anything out there that can meet my newly-high standards? Will I become some sort of cranky critic killjoy, categorically condemning everything as crap? Breathes there a book that exemplifies the principles of multiculturalism, new ideas, new ways of looking at the world, engaging plot, and artistic prose? Oh look, I have one right here. (How handy!) In fact it's a Hugo nominee this year. While I have my suspicions that Brasyl, by Ian McDonald, won't end up taking home the rocket, it should.

The story is told in three parts: past, present and future. In 1732, Father Quinn is a Jesuit priest who has come to Brazil to help deal with a rogue priest in the interior. In 2006, Marcelina is a reality TV producer who thinks she's come up with a sure-fire ratings hit. She'll find Barbosa, the goalie who didn't block the gaming-ending goal in a World Cup soccer match from the '50s, put him on TV mock-trial and see if Brazilians are willing to forgive him. As she tries to track him down some very odd things begin happening to her, as if a doppleganger is interfering with her life. Finally, in 2032, Edson is an entrepreneur working his way up out of the favela, the ghetto. When his brother steals a purse with a quantum-encrypted RFID system, he meets up with a quantumeira, an attractive rogue physicist hiring out her quantum computers for illicit purposes.

When all these threads intersect, and we finally find out what the ultimate conflict is, it is enlightening. It illuminates a much more fundamental question than simply "is all this real?" It picks an answer to that question, and then delves deeper into the implications. This is what really good sf should do.

It's interesting to compare Brasyl to its fellow Hugo nominee, Halting State by Charles Stross (about which more in a near-future post). Superficially, their near-future scenarios are similar. People have access to real-time heads-up computing in the form of web-connected glasses, and computing advances have led to quantum computing and largely ubiquitous surveillance that the characters must escape. Stross uses his story to make political points about personal and political struggles in such a world. McDonald gets deep into the structure of the universe and how we should move forward in a multiverse that may be just as strange as we can imagine. That difference in ambition is one of the many reasons why Brasyl is the superior work of the two (although as I'll make clear, I enjoyed Halting State perfectly well).

Another strength is that McDonald's characters are all interesting and completely different. Father Quinn is a powerful man who turned to the church because of his guilt over committing a murder. Marcelina has not signed up for an action-heroine life, but she will use all her resources to survive, even when the doppleganger ruins her already tenuous relationships with her mother and sisters. Edson is a man of many identities, refusing to be tied down to any one. Entrepreneur, young gay lover to an older man (who is also a physicist, helping with infodumping as needed), Efrim the empowered transvestite, Edson going after the beautiful lady physicist, DJ Pettycash the ruling DJ of the baile (street party - there's a very handy glossary in the back of the book), and many others. All of the main characters wrestle with multiple identities at different times, which reinforces the multiverse investigations of the plot and setting.

Each character/time line has a completely different tone and prose style. 2006 is written in the relatively straight-forward style that you find from most sf. The 18th century passages are written in a slower, more formal and poetic style. Edson's sections are exuberantly flamboyant. Consider this passage from the street dance:

Straight up Petty Cash catches PJ Suleiman's hip-swaying samba paulistano, hauls a mangue bass out of his sample array, and brings in a beat that has the bass drivers bowing and booming in their cabs. The crowd reels back all at once, whoa! Then in midbeat everyone is up in the air, coming down on the counterpoint, and the bloco is bouncing. Suleiman tries something clever clever with a classic black metal guitar solo and an old drum bass rinse, and it's itchy and scratchy but you can't dance to that. Petty Cash takes the guitar solo, rips off the bass section and bolts on funk in industrial quantities: an old gringo bass line from another century and a so-fresh-they-haven't-taken-the-plastic-off pan-rhythm. Efrim can see the track lines on Petty Cash's I-shades as his eyeballs sample and mix in real time. The audience are living it loving it slapping it sucking it: no question who wins this face-off.

Throughout that whole scene I found myself nodding my head to the beat of the invisible music - that kind of response, pulling the reader in so completely, is the work of a master.

I enjoyed this work so much that I almost hate to point out any flaws, but all books have them. This one has fewer than most. Quinn's traveling companion is a (presumably) fictional French scientist, Robert Falcon. In this time line he's invented a primitive computer for weaving patterns via punch-cards. In our universe this was invented by Jacquard in 1804. Perhaps this feat of prodigy would explain why Falcon is already bandying about the concept of Turing's universal computer 300 years early, but it rang a false note for me. Just because a concept is obvious to us now does not mean that it would be obvious to someone working with its antecedents. Another minor quibble is that Edson falls in love with one version of his quantumeira, then meets another one. For the ending to work one has to assume that his affections have transferred to the new woman (who isn't as cool as the 'original,' and McDonald doesn't quite sell the transition.

These points are really by-the-by. I haven't even started on the martial arts, the exotic cults, the honestly earned resonance with Heart of Darkness, the feeling that the people in the past and future really do think differently than we do, etc. It all comes together beautifully in a masterfully crafted package. I hope that via its Hugo nomination it gains a wide audience, many admirers and many imitators.
Posted by Karen Burnham at 12:37

Thanks for the great review! I don't usually comment --it's kind of bad taste, but I do have a little evidence to offer on the subject of looms. Jaen-Baptiste Falcon (who lived in Lyon) did indeed invent a prototype card-punch progammable loom in 1728: if your French is good, here's a wiki about him: http://fr.wikipedia.org/wiki/Jean-Baptiste_Falcon. His brother, however, is totally fictitious. His mission isn't, nor was the La Condamine expedition to which he refers, which can be read about it all it's glory and horror in the excellent 'The Mapmaker's Daughter' by Robert Whittaker. One of the joys of writing Brasyl was how much of it was pure documentary. Hope you don't mind me commenting: thanks again.

Ian - thanks for reading! I'm glad you liked the review - I certainly liked your book. Thanks for the background on Falcon. I felt like there was something there I was missing.

Those old scientific expeditions were really something, weren't they? Have you ever read The Worst Journey in the World? It's about Robert Scott's South Pole expedition. The author describes an incredibly perilous journey made to collect penguin eggs mid-winter. Then he publishes the entirety of the scientific article that made use of their hard-won artefacts. 1 page. It's hilarious and depressing at the same time.