"The Smartest Mob..." by David Brin 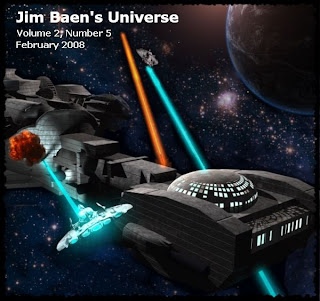 The lead story in February's Baen's Universe is by David Brin. It reads as if it were a submission to the David Moles/Jay Lake-edited All Star Zeppelin Adventure Stories anthology, but instead it appears to be a follow up to the story Brin wrote for that volume. "Sky Light" had the same main character, a plucky female journalist named Tor, starting a zeppelin journey from San Diego to Washington, D.C. In "The Smartest Mob..." Tor is heading towards Washington, perhaps finishing the same voyage.

Although the plot is obviously an excuse to show off the nifty future he's developed, Brin is a talented writer who knows how to pace things and build dramatic tension. Tor's zeppelin is being delayed getting into Washington, because of suspicions of terrorist threats. Because of disinformation campaigns by various bad guys, it's impossible to know which threat is the real one, but Tor begins to suspect that it involves her zeppelin. She summons a smart mob from the internet, basically a real-time wiki/forum group, to advise her as she investigates. She gets some expertise by mob members who used to work on zeppelins. She polls the group when it comes to decisions, although since it's her butt on the line she ultimately has to decide what to do. In real-time her interest and reliability numbers go up and down, and the mob's numbers fluctuate accordingly.

Although the inclusion of real-time wiki groups accessible everywhere seems very "now," this story is closely related to one written by Brin in Earth in 1991. The fact that Tor's glasses use the same brand name, "TruVu" as the ones in that book suggest that it's basically the same universe. There he had scientists using the internet and subvocal interfaces to collaborate in real-time about quickly evolving crises. Things weren't as anonymous in that book as they are here, but that's the only significant change. The fact that the story works well using roughly the same concepts he used 17 years ago is a testament to Brin's talent as a forecaster. Compared to Earth this story backs off a little on the eco-catastrophe that he predicted: in this story parts of Washington are just being reinhabited after a terrorist attack and the zeppelins are a response to the need to reduce greenhouse gas emissions in long-distance travel. Comparatively in Earth, much of the coastal areas all around the world were essentially underwater already. Perhaps this story pre-dates Earth in that timeline, although it isn't clear.

Despite the wiki/Web 2.0/global warming elements of the story, I realize that I couldn't imagine Cory Doctorow or Charles Stross writing this story, and I'm trying to figure out why. In the near-future short fiction I've read from Stross he tends to write about the people who write the software, the ones pushing the boundaries (I'm thinking of Manfred Manx from "Lobsters," particularly). In comparison, Tor is simply a user of the tech that others have developed. She is not an innovator herself. I haven't read as much of Doctorow's short fiction, but I feel like his tends to get deeper into the fundamentals of how tech changes society. Here society, even with "reliability ratings" and instant polls, is roughly the same as ours (which may be more realistic in the long run than making the rather large conceptual leap to a fully reputation-based economy, as Doctorow did in Down and Out in the Magic Kingdom). It seems that stories like Brin's function more as showcases for new futures, not so much as interrogations of them. That may be the main difference I'm sensing between Brin's fiction and our current cutting-edge guys.

This isn't a perfect story obviously, and I wouldn't go so far as to say it's worth the price of admission alone. It is contrived, and some twists are predictable, and sometimes he slows things down to admire his nifty toys and futurism. However, it's a good story, and when I asked myself if it's worth finishing the answer was Yes. Baen's is certainly continuing to attract top talent to their pages, and this issue is no exception.
Posted by Karen Burnham at 09:52