I've been here at ICFA 29 since Tuesday night, and I'm having a lovely time. I'm afraid I've been sober rather more often than I'd anticipated, due to some stomach trouble, but other than that things are going great.

ICFA is the International Conference on the Fantastic in the Arts, and this year I'm giving a paper titled "Superheroes Used Symbolically in Novels." The wonderful thing about ICFA is that I've already heard some great new things that have made me revise the paper on the fly. I love this community!

So far for me the panel highlights have been a panel called "So You Want to Write a Superhero," where I heard from several authors who write unillustrated stories using superhero tropes (even poetry!). Some common elements were using Supers to examine power relationships and also the connection of comic books to modern myths.

A paper session titled "Audience, Adventure, and Archetype: Performance and Participation in Fantastical Texts" was also quite interesting. Jim Casey talked about the presentation of authorship, as well as the disconnect between the actor and the acted in Neil Gaiman and Charles Vess' Sandman issue "A Midsummer Night's Dream." Aidan-Paul Canavan gave a hilarious talk about how stock descriptions of gaming characters influence the subtext in character descriptions in normal fantasy novels (e.g. dark blades would indicate a rogue rather than a fighter, robes instead of armor indicate a wizard, etc.) Then Brian Attebery gave a fascinating talk on how the memorat ("telling of a personal experience without artistic pretense or traditional motifs") framing structure of many folktales and urban legends can be seen in fantasy narratives. He explained how these may function in at least three of the four categories of fantasy identified by Farah Mendlesohn. I certainly learned a lot from that paper. 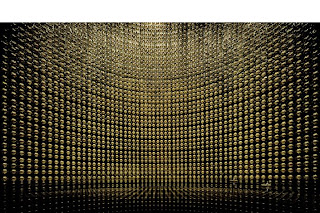 Just now I attended the Scholar Guest of Honor speech by Roger Luckhurst titled "Contemporary Photography and the Technological Sublime, or Can There Be Science Fiction Photography." This was much more interesting than I feared. For one it gave me another interesting example of how to apply theory. Also, he made his point fairly convincingly for analog/chemical photography, before admitting that digital photography makes it even more likely that sf photography is possible. The pictures he showed as examples were very striking, and really helped make his case about photography using the iconography of the sublime.

Between all that, talking with friends and striking up interesting conversations with new people, this is just as much fun as I remembered from last year. I only hope that my stomach troubles will eventually clear up so I can enjoy some more food and wine - I feel like I've had to resort to a monastic diet to keep things settled.
Posted by Karen Burnham at 13:49