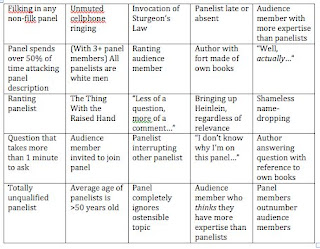 As promised, an updated and completely-filled out version of the Con-Panel Bingo card. If I were a younger geek, I would have written a little java program that would randomly generate a 5 x 5 grid with the different entries shuffled for anyone who wanted to click on it--that way people could have their own custom version. If anyone wants to write an app like that, please do--I'd like to see it! For now feel free to grab this version & print it, or as Michael Lee suggested on Twitter, just use it as a drinking game! At least it will help pass the time during those panels... you know the ones I mean. ;-)

Thanks to everyone for the suggestions!
Posted by Karen Burnham at 16:36

You missed "moderator who won't let the panelists get a word in".