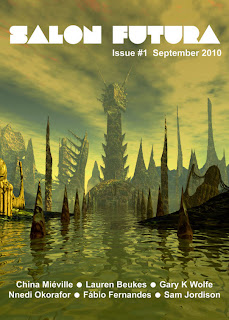 So the newest entry in the non-fiction-magazine-about-the-speculative-fiction-field has arrived! Salon Futura #1 is here, and it's got a lot of good stuff. There's a podcast with Gary K. Wolfe, Nnedi Okorafor and Fábio Fernandes, plus interviews with China Mieville and Lauren Beukes. Editor Cheryl Morgan covers the book reviews, Sam Jordison covers 19th century inventiveness, and Jonathan Clements writes on the passing of anime director Satoshi Kon. My contribution is a review of three short stories: "Coyote Barbie" by Cat Rambo (Expanded Horizons) , "Ice Moon Tale" by Eilis O'Neal (Abyss and Apex), and "Throwing Stones" by Mishelle Baker (Beneath Ceaseless Skies). I hope that you'll check it out and enjoy it!

And now, (because what teh Internets need more of is my take on short fiction) here is my review of Ted Chiang's new novella.

“Lifecycle of Software Objects” is available from Subterranean press, continuing their tradition of publishing top-rate stand-alone novellas from the field’s best authors. (To much success--I notice that "Lifecycle" is already sold out.) To drastically oversimplify the premise of this story: imagine digital pets that you could train--but that would have a human child’s potential to learn. Of course they’re very cute and responsive. They don’t cry and they go to sleep (suspended consciousness) when you tell them to. If you make a mistake, you can roll them back to a previous iteration and start over. Now imagine what happens to all these beings once their popularity fades. 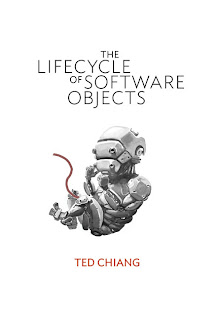 Our viewpoint characters are Ana and Derek. Ana is an animal researcher originally brought in by the digients’ developers to help with their pre-training. Each model of digient is trained up to at least a toddler’s level. Then copies of that trained version are sold to the public. Derek is a programmer who helped with the visual animation routines for the digients. They each adopt digients from the original models. Derek has Marco and Polo, two instances of a panda bear character who have the same genome but were trained differently. Ana has Jax, a copper-polished robot avatar that she helped train.

We spend many years with these characters, getting vignettes at roughly one year intervals. Here Chiang takes full advantage of the novella’s length (“Lifecycle” is his longest piece to date): he is able to work through many variations and implications of the core idea of growing artificial sentient beings. There are good owners and bad owners, software hacks and platform issues. As the original digients’ popularity wanes, Ana and Derek remain part of a group of die hard owners doing their best to support them. Newer models come on the market. Jax, Marco, and Polo grow in sophistication and understanding of their own circumstances.

Throughout these years, Derek has an unrequited crush on Ana. For a long time he’s married, but eventually he divorces. Inevitably, at just that time Ana moves in with her boyfriend. They remain in close contact over the digient issues. This subplot helps to motivate both the characters in various ways. It also provides a useful illustration that human decisions often aren’t made for ‘rational’ reasons. As the digients approach the age and capability level at which a human child would become an adult, it serves as a counterpoint: at what point should we trust another being with control of its own destiny?

Everything in “Lifecycle” is laid out neatly, progressing neatly from Point A to Point B. The language is simple and smooth, told in present tense and not wasting any time. In addition to the saga of the main digients, we also get a fascinating array of variations on the same basic concept: digients trained to be OCD about game-playing, trained to be useful personal secretaries, trained (or untrained) to be aliens, given legal emancipation by their owners. It thoroughly covers a wide and thought-provoking amount of ground. It also has a rather timeless quality: for all that one can use analogies to things like Second Life and Tamagotchis, it feels like this could have been written twenty years ago or twenty years from now and been equally interesting.

Nonetheless, I wasn’t as impressed by this as I have been by some of Chiang’s other works. While it is thorough and thought-provoking, I never got that opening-out, mind-expanding moment where my understanding changes in a ‘Wow!’ moment. That is a damn high standard to set--and one that only Chiang meets with any consistency, making its absence here more noticeable. It's also a very personal standard: "Exhalation" may not have had that effector on others, but "Lifecycle" may hit that sweet spot for someone else. In addition, I felt that the Ana/Derek subplot wasn’t entirely integral to the story, that it didn’t synchronize with the overall theme of the digient’s growth and potential.

But at the end of the day there’s no question: this is one of the best sf short fiction pieces you’ll read this year. “Lifecycle” is well-written, thoughtful, and entirely award-worthy. And don’t forget the illustrations! In Subterranean’s publication, Christian Pearce supplies spare but evocative illustrations, with the digient world in grey scale and the human world in red. They provide very effective amplification to the emotional beats of the story.
Posted by Karen Burnham at 10:36

I really enjoyed Lifecycle. For me, it was more an Ana/Jax story than an Ana/Derek story. my timing worked out perfectly too, shortly after reading it, I saw an E3 promo for something called Kinnectimals - digital pets on your video game console, and you wear a glove to interact with it - pet it, play fetch, feed it, that kind of thing. It screamed digients!!

Wow, that was fast! But it's such a logical extension of Tamagotchies that it makes sense.

I agree that the story's focus is really (and properly) on Ana and Jax, but that makes the whole Ana/Derek thing all the more distracting to me. YMMV.