Stuff that Makes Tolkien Look Like a Radical Progressive 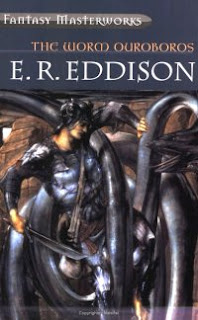 Imagine reading The Lord of the Rings. Now imagine it without any truly memorable or empathetic characters, or any good dialog. Imagine the battles scaled down, the bloodthirstiness ramped up, and the quests made kind of pointless. Now imagine no longer! E. R. Eddison's Worm Ouroboros was published in 1922.

I'm being a bit harsh here, but really, this one makes Tolkien look like a superlative genius. The fact that his characters rise to two-dimensionality is a huge improvement over Ouroboros. After so much of my pre-1930s reading, I've come to believe that the fact that Tolkien's characters are so memorable and well-beloved is what truly lifts his work above so much that came before. This makes him seem almost sui generis, but all these earlier examples show that he clearly is not. Ouroboros in particular is a direct ancestor of LotR, and apparently it is well established that Tolkien read it. But this is the book that makes me picture Tolkien reading it, throwing it down and shouting "I can write something better than this!" and stomping off to start The Hobbit. Ouroboros shares with LotR a somewhat Norse outlook on things, a supernatural bad guy, quests, etc. What it lacks is epic scope and any trace of charm.

The main players in the story are Demonland and Witchland. Despite the names, all the people involved in the conflict are basically human, and Demonland turns out to be the 'good guys.' Witchland is ruled by a King who made a deal with some sort of evil powers to get insti-reincarnation. Whenever he gets killed, he spawns again in his Iron Tower. This is symbolized in his ouroboros ring (this ring, once mentioned, will have no further importance to the story). Early in the story, Gorice XI gets killed in a wrestling match with a demon lord, and Gorice XII pops up.

To avenge the death of his previous self, Gorice summons up a eldritch sea monster to wreck the demon fleet heading home. Lord Juss, our super-heroic hero, survives, but his brother Goldry Blusco is nowhere to be found. Nonetheless, Juss is sure that Goldry isn't dead (WTF?), and heads off on a quest to rescue him. While he and his only-slightly-less super-heroic lordly sidekicks are away, the Witchlanders conquer and sack Demonland. Chalk one up for incredibly bad leadership on Juss' part.

So Juss goes off questing. This has many different phases: wandering through a peaceful landscape, holed up in a fort with several hundred men against several thousand, wandering some more and being nice to animals, and mountaineering up to the abode of a demigoddess. She confirms that his brother isn't exactly dead, and Juss can get to him with the help of a hippogriff. However, their first hippogriff gets hijacked, so they head back to Demonland and kick out the Witches.

The Demons start cleaning things up, and eventually Juss finds another hippogriff. He flies over, climbs some more, avoids some temptation, and rescues his brother. Now the Demons go on the offensive: they destroy the Witches' fleet, and land on the Witches' doorstep.

Now the Witch King Gorice has a choice: fight square or use magic? Unfortunately, there's a hitch: a prophecy related to his immortality that says if he unleashes the big magic again, he'll be really dead this time. So he fights square, but loses due to the tactical brilliance and general heroic-ness of Juss and the Demons (although Juss' hard-won brother doesn't play any pivotal role in the battle, and one of the more interestingly ambiguous side character gets killed off almost casually).

Then the Witch King goes off to try magic while his inner circle poisons itself through treachery. The Iron Tower falls (Gorice's last moments happen totally off-stage), breeching the walls and allowing the Demons to come waltzing in.

Yay, they've won! There's peace all over the world and the Demons rule everything. But, when talking to the demigoddess who helped them with the brother quest, it turns out that the Demon lords are all sad. They'll have no more epic fights in which to prove their valor and heroism, no mighty enemies worthy of their might of arms and storied weapons. They've got nothing to look forward to except peace and prosperity for all of their days; how boring! So the demigoddess actually brings all the bad guys back to life, and the last page of the book literally returns to the first page--hence the ouroboros.

So yeah, just the fact that in LotR the third age actually ends, the elves actually leave, and Frodo really can't go home again looks like a brilliant dose of realism compared to this stuff. Some of Ouroboros' other flaws: Lists of stuff in lieu of descriptions. Spending way too much time with the bad guys, seeing them be mean to each other and lewd with women. It makes them silly instead of threatening. And it doesn't help to make your battles sound really epic when you actually give the troop numbers: 800, 3000, 5000, etc. I think the biggest number is around 6,000, which is supposed to be a devastatingly huge force. Considering that this was written after WWI, I found it almost quaint--maybe the readers of the time found it comforting.

Also, there are lots of other minor plot points that are never really paid off. One good guy gets hit with a curse, and all the terms of the curse come true (of course), but it doesn't really seem to bother him that much. And generally, we are supposed to understand that things matter because the author says so, not because he shows them. These guys are awesome/heroic/really evil/really good/really attractive/etc.--because he said so! None of them really come across as any of those things in casual reading. Certainly the characters all blur together after a while (especially the three Witch lords whose names all begin with 'Cor-').

You can definitely see the Norse influences here: the emphasis on personal heroism over actual leadership and the desire for perpetual war to prove valor, among other things. There are also place names such as "Threngrim." However, it's definitely not a pure influence: "Threngrim" is in the same region as "Taranadale" and "Owlwick." That must have set the linguist in Tolkien twitching.

Of the classics I've read so far, the only one with really memorable characters is George MacDonald's The Princess and the Goblin, which was written specifically for children. Actually, I'll throw Alice in Wonderland in there too, also for children. I suspect this may be one of the reasons that Tolkien started with The Hobbit instead of the more adult-oriented LotR. Even Lord Dunsany, whose short fiction I've enjoyed immensely, wasn't that big on character. Over time I'm definitely coming to realize why Tolkien stood out in the field the way he did.
For an interesting alternate take, see Georges T. Dodds' review at SFSite. It acknowledges all the flaws listed above but loves it anyway.
Posted by Karen Burnham at 12:23