The Night Lands: An Inner Portrait of Evil 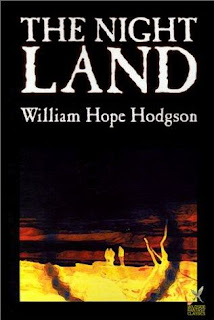 First off: spoilers ahead. I think 97 years is just about enough time for that statute of limitations to run out.

The plot of The Night Land (1912, William Hope Hodgson) is simple: boy meets girl, boy loses girl (in contemporary times). Boy meets girl again, loses girl again (on the Earth long after the sun has gone out). Boy goes questing for girl, with armor and a sword (sorry—”Diskos”). Boy gets girl and guides her all the way home, where after a brief panic they live happily ever after.
Sounds great, right? Very classic, and the far-far-far-future setting makes it unusual for its time . Along with H. G. Wells' Time Traveler and a previous Hodgson novel, House on the Borderland, I believe this may have been an influence on Olaf Stapledon. The first part, where the narrator explains how his world works, makes telepathic contact with his love, and sets off on the quest are all straightforward. Not necessarily well-written, mind you—roughly 90% of the paragraphs begin with “And…”—but not bad. You can tell the narrator views his own story as a knightly quest. Pretty much the only thing he’s missing is a horse.

The problem comes at the halfway point, when he finds his love, Naani. She is the sole survivor of another human outpost where the Earth-force that sustains humanity in this post-solar future has waned. They can still hear others from her settlement being chased and killed by monsters out in the darkness, but she has apparently survived for about a month without any protection. Not bad. As they move forward however, we quickly learn that the protagonist is an obsessive, controlling domestic abuser whose misogyny knows no bounds. Frankly, once he actually interacts with his true love—and their loves transcends the millenia of history!—he is revealed to be, by modern standards, evil.

The amazing thing is that he obviously does not regard his behavior as evil—in fact, he thinks their relationship suffers most when he is too lenient. Neither does the story repudiate his behavior. This is crucial—for a long time I was hoping that the guy was essentially an unreliable narrator and that the story events would prove how wrong/evil he was. Nope! He gets to live happily ever after with his love.

Let me illustrate just how messed up this relationship is. The first hint comes when he realizes that Naani is eating less than he recommends. He ‘shakes’ her for this offense, trying to put some sense into her. That seems like a bit of an overreaction; I can see why she would be trying to conserve limited resources. But to him it is ‘naughty’—his term for anything she does on her own instead of doing exactly what he tells her to.

Next, he decides that he should carry her for six out of every eighteen hours of walking. She doesn’t want to, she’d rather walk, but he forces her to be carried. After several days of this, he realizes that his armor has been bruising her as she’s carried around. His reaction to this: to smack her around some more (more ‘shaking’) for not having alerted him to this harm she’s suffering. OK, WTF? This guy’s got issues.

Next, they find a fairly safe spot and she takes a bath. She’s lingering and joking around (we assume—there’s actually no dialog in the story), and resists when he insists that they leave. So he picks her up and carries her away. After she lets him get a mile or two on, she reminds him slyly that he forgot her shoes. Again, he beats her for his own oversight, angry that she would make him make a mistake like that. After that, she starts acting in a mock-submissive way, not speaking unless spoken to, not snuggling or kissing him, acting like a servant or slave. This is when I had some hope for the story: maybe it’s showing how the abuse is ruining their relationship.

Nope! After a few days of this, he realizes that he’s been too lenient with her, and that’s the problem. He takes off his belt, takes off her shirt, and literally whips her. After that, she tearfully hugs him and their relationship appears to return to an ideal state. Immediately after that, they’re attacked by horrible monsters. He saves her, but almost dies in the process. After running from the monsters a lot (the monsters do no more harm to her than ripping off her clothes—grrrr), she rescues him and gets him to a safe island and nurses him back to health, all snuggles & kisses.

Now, here’s where I was hoping that the narrator was just delusional. I managed to continue reading by imagining that she’s just playing along with him; after all, he’s her only chance to get back to a secure human habitation (the “Last Redoubt”). I kept hoping that maybe, just maybe, they’d get back to security and she’d turn around and smack him.

The darkness attacks her specifically as they near home base, and the narrator carries her for several days—never sleeping, fighting off monsters one-handed as they near their goal. You can see why I was wondering if he were a reliable narrator. Eventually they get close enough that other forces from the Redoubt come out to help them. There, a doctor pronounces her dead and the narrator collapses in a dead faint.

OK, I could deal with that. Maybe he’ll be eaten up with guilt about the beatings he gave her; maybe they weakened her such that she couldn’t fight off the dark powers anymore. Maybe he’ll learn a lesson.

He wakes for her funeral, planning to expire after his final duty to her is done. As they place her on a rolling road at the end of the ceremony (their version of a river funeral, I guess) they see movement! At first he thinks it mere fancy, but no! She’s alive after all! She gets to live with this violent, obsessive domestic abuser for the rest of her life, woohoo! I guess it’s better than being eaten by monsters, but frankly, she’d survived the monsters without him, at least for a time. I might have taken my chances back on that safe, isolated island.

Throughout it all the narrator continually engages in infantalizing language: talking about how small she is (her two hands could fit in his one), her tiny dainty feet (I got to wondering if he had a foot fetish, actually), her childish behavior, child-like innocence, insisting on carrying her, etc. Coming from today’s sensibility, it is incredibly annoying and definitely shocking, especially the unapologetic beatings. And throughout it all he insists, for pages and pages at a time, how very much he loves her and wants only to keep her safe from any harm. He only beats her to keep her from harming herself! She makes him do it! The paradox of injuring someone to keep them from injury never occurs to this guy. It was frankly incredibly disturbing to read and I was very glad to be done with it. It is a textbook example of everything you learn about the psychology of abusers--but from the abuser's perspective. Creepy.

I had previously encountered a terribly misogynistic first-person protagonist in The Purple Cloud by M. P. Shiel (1908). And it was also pretty disturbing when he, the last man on Earth, started smacking around the last woman on Earth once he finds her. However, the narrative makes it clear that he is almost wholly evil: he also has committed and conspired to murder, was instrumental in (unintentionally) setting off the phenomenon that killed every other person on Earth, and spends some of his post-apocalypse free time in setting explosive charges to blow up entire cities. Even by his own accounts, he’s not right in the head. Night Land however, has no such criticism for its protagonist. 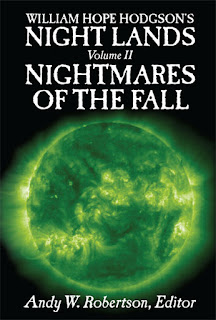 Obviously this book has been very influential: Greg Bear’s recent City at the End of Time (which I haven’t yet read) explicitly takes Night Land as its main influence. Wikipedia also cites Lovecraft and Clark Ashton Smith as lauding it. There are, I discovered, two anthologies worth of Night Land-inspired short stories out there, both edited by Andy W. Robertson. I’m tempted to pick them up and see if any of the authors engage with the horrible misogyny on display here. None of the people who mentioned the book as one I should read mentioned that feature of the narrative, which I felt dominated the entire second half. They all focused on the amazing setting instead. Likewise, the Wiki page declines to even name Naani, the motivating force/quest object/only named character in the entire book! Apparently the article editors didn’t find her worth mentioning. I’m just really shocked that this novel isn’t up there with the Gor novels as a notorious early example of incredibly f*cked up gender relations.

Full disclosure: I have previously read House on the Borderland and Ghost Pirates by William Hope Hodgson. I was impressed by some bits of Borderland, not much by Ghost Pirates. I’ll never be a fan of Hodgson’s writing style, although I’ll admit that when he wants to he can really pick up the pace. I’ll note that I was also upset by the treatment of the sole female character in Borderland (I think my comment was: “the dog has more agency”) and Ghost Pirates had no female characters at all. As for source, I picked up all of these from Project Gutenberg and read them on my eBook and my PC as circumstances warranted.
Posted by Karen Burnham at 21:02

Kathy, a lot of our Night Land fiction is online and can be read for free.

Be sure most readers and fans of TNL regret Hodgson's sexism extremely.

Sorry for the delay in getting back to you, I was at the World Fantasy Convention this weekend.

I'm not sure your website is very convincing on that front. Among the critical articles, only two focus clearly on the gender question. One is by John C. Wright in which he defends the main character's choice to resort to violence against his true love. (http://www.thenightland.co.uk/nightfemininity.html) Still very disturbing.

The other (http://www.thenightland.co.uk/nighterotic.html), amongst its other arguments, denigrates the entire idea that women could ever be effective in combat--something the military women serving today probably wouldn't appreciate.

If, as both these authors assert, Hodgson's treatment of Naani has been universally condemned, where are all those articles? Why do none appear on your site?

Also, my name is Karen Burnham, not Kathy.

Oh Kathy, calm down.
Women could never be effective in combat. Who cares if it offends women serving today. Facts are facts: they're not as effective. And is well known standards are lowered to placate to the easily offended (see yourself) sensibilities of many women.

I know this is an old article but I'm pleased to read your perspective echoes my own trouble reading this book. I really don't feel it warrants my attention long enough to finish it.
Good to note that House on the Borderland is more of the same garbage.