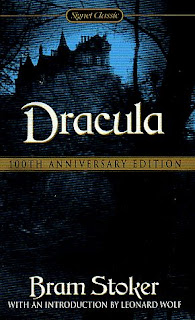 [Posted on the 112th anniversary of its publication.]

It's always fun coming to these 'classic' tales; you never know quite what you're going to get. Is it going to appeal, or will it be one of those books that's important, but not fun? Something like Dracula could easily fall into the latter category. Certainly not every book that has spawned so many imitators and innovators is itself a gem. Yet I was happily surprised by Bram Stoker's original. Any book that has you yelling at the characters 'When will you people learn to pay attention to the color text!' (if you'll pardon my inner RPG-er showing) is an involving book that is well worth the read.

Another fact about reading classics is that you're never coming to them fresh. Does anyone picking up Frankenstein these days find themselves shocked --shocked!-- that it involves creating a living being out of dead people? Probably not. So I knew that Dracula is a vampire, a very old and powerful one. I knew that the Harkers would be involved, as well as Van Helsing. I knew some of the rules of vampirism as they've come to be popularized. I didn't know much else, so I was still surprise-able. For instance, I largely assumed that any character whose name I didn't recognize, such as Lucy Westenra or Dr. Seward, was going to be toast by the end of the book. For all I knew, it was possible that Mina Harker and Dr. Van Helsing would be the only survivors, hence their appearances in subsequent movies/books/comics/etc. Not true, as it turns out.

The book itself is a bit unconventional (coming as it did before the conventions). It is purely epistolary, being told solely through diary entries, letters, and newspaper clippings. It is also charmingly unrestrained by genre conventions. It takes turns as pure horror (Jonathan Harker’s hair-raising experiences in Count Dracula’s homeland), domestic drama (Lucy Westenra writes to Mina soon-to-be-Harker about deciding which of her suitors to marry), medical drama (her suitors, joined by Dr. Van Helsing, band together to try to figure out why she is wasting away), mystery (as the band of adventurers track Dracula down to his London hide outs) and ticking-time-bomb thriller (as they race to prevent him from returning to his base of power).

Stoker does some great things here. For one, the more we find out about Dracula's powers, the less we see him on stage. By the end we know of him only by his movements and his psychic link with Mina. He's only onstage as a real character during Jonathan's stay at the castle, where we don't yet know the full range of his powers. This makes him both mysterious and more sinister. On the other hand, after all the build-up, the actual victory over the Evil is pretty anti-climactic. It's a very tactical endeavour to get to the right place at the right time in order to not have to face Dracula at his full strength. And only one of the menfolk die in the doing, although I'll leave the gentleman's identity safe from spoilage. It’s rather different from Dracula's end in various movies.

I think the book is strongest when it partakes most of the horror genre. The tale of Jonathan’s trip to Castle Dracula is truly harrowing, and I think that the tale of the ship that brings Dracula to England (of which we learn via the Captain’s log and later newspaper reporting) would make an incredible film all of its own. Certainly it is in these scenes that Stoker’s imagery is most vivid. Lucy’s romantic dilemmas drag on a bit in comparison. I also admire the way Stoker uses the epistolary form to really punch up his occasional (and occasionally literal) cliff-hangers. Although if you really want to make yourself giggle, try picturing Hugh Jackman delivering various of the elderly Dutch Dr. Van Helsing’s lectures. I dare you. But in the final analysis, Dracula is a good and fun read, not just an influential one.
Posted by Karen Burnham at 21:40