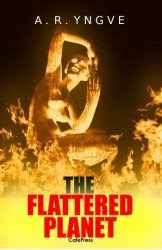 This is a slim volume of short stories, perfect for airline or beach reading. In The Flattered Planet, A. R. Yngve proves himself to be an author of idea-a-minute inventiveness, but not much maturity. Especially with the politically oriented stories; they have all the subtlety of a brick to the head. (On a more general note, with the election of Barack Obama, stories that assume that the default 'President’ is like Bush Jr. aren’t aging well.) Of course, subtle is hard to do in stories with a maximum length of about 20 pages (small pages with large font and significant margins) and a minimum length of 6 words. (Of the flash-fic my favorite is: “He killed for the elixir of eternal youth. He got life.”) And some of the ideas are good: there's beautiful imagery in a story of underground women whose habitat is threatened by oil drilling (although inasmuch as they are portrayed as a threat, they contribute to a rather myopic treatment of women throughout). There’s also a good one about quantum observers and how even mundane things may effect the universe.

On the other hand, some of the stories devolve into outright silliness: in the opening story, one of the longest, increasingly powerful NASA telescopes discover an Earth-like planet. Following an unrealistically accelerated timeline, they see more and more detail, realizing that it's not just Earth-like, it's *exactly like* Earth. Eventually we send a probe, and they realize they're being watched. They paint their Moon in such a way that we can see it, claiming that we are poor copies of them. The viewpoint astronomer believes that they're a poor copy of us, and conceives a plan to send up a message flipping them off. In another, a thinly disguised Cory Doctorow is repeatedly revived after death, and forced to perform for the amusement of tormentors, since the ‘copyright’ on his life and experiences has expired and people can do what they want with him.

That's really where these stories fall down; even when the ideas are intriguing, Yngve tends to take the low road to silliness instead of examining them with any thematic depth. Still, it's much easier to forgive stories when they are <4000 words long; at least you haven't invested that much. So if you want a light read that throws around ideas like they're confetti, you could do worse than this. However, even with all the ideas in the air here, due to execution none of them completely rise to the level of thought-provoking.

Edited to Add: A. R. Yngve's Response
Posted by Karen Burnham at 10:28