Slowly Catching Up on Magazines 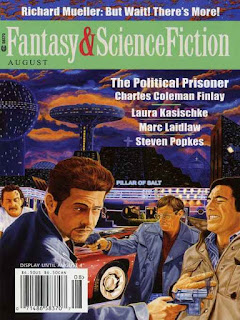 First off, I did read F&SF for August, and nothing there particularly stood out. I didn’t skip any of the stories, but neither did any of them rise above the RUMIR designation (again from Joanna Russ’ comment: “The stories are routine, unoriginal, mildly interesting, and readable”).

Most of the stories in the August Asimov’s fall into the same category (of course, almost by definition, most short stories everywhere will be RUMIR). “Old Man Waiting” by Robert Reed ends with a good twist but doesn’t have much else. “Lucy” equates a robotic probe on Saturn being abandoned with people in an apartment complex being unpleasant to one another. “What You Are About to See” by Jack Skillingstead has the misfortune to follow one of the non-RUMIR stories (about which more later) which does quantum effects much better, leaving this one suffering in comparison. (It doesn’t help that Skillingstead’s style has never worked well for me; I appreciate it intellectually but it’s usually so unrelentingly depressing that I remain disengaged emotionally. This one impressed me the most of his that I’ve read so far.) “Wilmer or Wesley” is a nicely ambiguous tale by Carol Emshwiller—the protagonist may be human but is being displayed as if he’s some sort of experimental ape. The moral seems to be “treat animals as you would want to be treated.” Finally “Radio Station St. Jack” by Neal Barrett, Jr. continues his post-apocalyptic future. Somewhere around northern Texas, various groups have devolved to roughly Civil War times. There’s a settlement that’s basically friendly with local “Indians,” and they’re all threatened by a big bad group of bandits. A local “priest” runs a radio station and as a local leader, has to try to save the town. I wasn’t totally into the story but I was willing to give it the benefit of the doubt… until the end when it turns out that all of the priest’s actions didn’t matter and the story was resolved from completely out of left field. Quite frustrating. 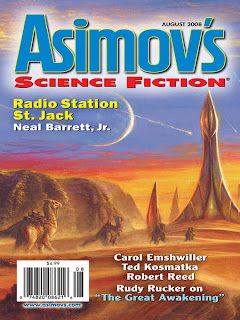 However, none of that should detract from the two most interesting stories in the issue, “Lagos” by Matthew Johnson and “Divining Light” by Ted Kosmatka.

“Lagos” takes place in a near future Nigeria. Lower class women find work going into VR and controlling various remote robotic appliances for rich Westerners—robot vacuums, dish washers and the like. Safrat is our protagonist and her brother (who sells water to make a little money; he’s hoping for one of his relatives to find him a better job) discovers that she talks in her sleep, in English. Needless to say, the VR firewalls are acting a little funny. They go see a traditional healer and find out what the problem is. At the same time her supervisor believes that her dreams may point him to a fortune, but he gets a big surprise when he tracks it down.

I appreciated this story on several levels. One is simply the fact that it is set in Nigeria and all the actors in the story are Nigerians: good, bad, and indifferent. I also appreciated the extrapolation: much like some spammers already hire kids in third-world countries to decipher all those little random “type the letters you see” boxes meant to defeat automated spam-bots, one could easily imagine it being cheaper by far to hire third-world women to run appliances than to come up with adequate artificial intelligence to do so. Finally, I appreciated that the characters (to a limited extent) rise above the level of stereotypes—difficult to do with a short story. Particularly the supervisor is not one-dimensionally greedy and exploitive, although others around him are. Also, the “shaman” is neither the deus ex machina nor a useless impediment, but someone who helps to resolve the mystery. Overall, a nicely done story that helps to push sf to more awareness of the non-Western world’s future.

That said, the real stand-out in this issue is Kosmatka’s novelette “Divining Light.” I expect to see this in many Year’s Bests and a whole bunch of awards ballots. It’s one of the few stories to unflinchingly wrestle with the implications of quantum wave function collapse, and it does it with style and emotional realism. It is pretty bleak (the tone closely resembles his previous widely recognized story, “The Prophet of Flores”), but fascinating and unique.

Our protagonist is a burned-out scientist, once an up-and-coming star. A friend takes pity on him and hires him on at an R&D firm. To amuse himself, he starts replicating the famous double-slit experiment of quantum physics. If you fire a photon stream (beam of light) at two slits, the pattern on a screen on the other side will be a diffraction pattern; the photons act like waves and interfere with each other. However, if you place a detector on one of the slits, the pattern become two solid groupings behind the two slits—the act of measuring which slit the photons go through makes them behave like particles, not waves. That part is absolutely true by the way, and it’s weird enough.

Then comes the big “what if” of the story: what if it makes a difference whether or not an observer knows about the detector results? Here’s what he does: he runs the experiment with the detector on (one would expect 2 groupings on the screen behind the slits). Without checking the screen, he clears the memory of the detector, then looks at the screen—it’s an interference pattern as if the detector had never been on. He calls it retrocausality: the system behavior depends on the actions of a conscious observer in the future. If a conscious observer doesn’t “collapse the wave function” (cause the pattern to go from interference to blobs), it remains an interference pattern.

Kosmatka goes all the way with the implications of this: they start testing the meaning of a “conscious” observer. They rig up a series of lights so that animals have the capacity to collapse the wave function; none of them can. In a twist I hadn’t thought of but makes perfect, depressing sense, a pro-life group decides to test fetuses in the womb to see when they become conscious. They refuse to release their results—in fact as studies continue, it turns out not all humans can collapse the wave function. However, at this point the whole thing has already become some sort of test—of “humanness,” “consciousness,” or “soul,” depending on your agenda. In the end, the characters have to interpret and deal with what they’ve discovered. It’s an absolute triumph of taking pure, hard science and digging into the human implications. Although I might wish for a tone less bleak (I really think it’s possible to consider quantum indeterminacy without becoming an alcoholic wreck), I appreciate the characters he’s created and their investigations: pursuing the truth of the universe no matter how bizarre, and not shying away from the consequences. I haven’t done this story justice—go read it!
Posted by Karen Burnham at 12:13

Karen, thanks for the kind words about my story. I really appreciate it.

You're both more than welcome. Keep up the good work!