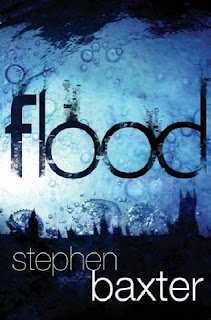 I have occasionally heard it said of some science fiction books that “this is not a novel.” I vaguely understood what was meant by that comment, but Flood by Stephen Baxter is a striking illustration of the principle. This is a book that is centered on a single idea: what if the entire Earth flooded? (Or, to put it irreverently, what was it like during the transition between our time and Waterworld, the movie?) Flood takes us all the way from “occasional minor flooding in England” to “the tip of Mt. Everest succumbing to the waves” in only 36 years, 2016-2052. Theoretically, this story is told through the eyes of people who experience the turmoil and upheaval. However, it’s really told through a series of vignettes that happen to paper dolls who have names and share a rough background. Don’t get too attached to any of the characters: first off, it’s a pretty lethal time when the world floods. Secondly, they’ll act in completely random ways in order to get a scientific/plot point across. Even if you’re interested in the emotional consequences of their actions, you’ll never find out what those might be. In this book Baxter is forced to use human viewpoints to show what is happening to the Earth, but he doesn’t seem to care about the characters’ whose eyes he is using.

Our core cast of characters is drawn from a group of hostages. They’re American and British citizens who have been held hostage by various extremist groups in Southern Europe for years when they’re finally rescued. They swear to keep in touch and to try to help each other out in the coming years. One of them, Helen, had a baby in captivity, the product of rape. Her baby, Grace, was the focus of her life as a hostage, but in the chaos surrounding their rescue, the baby is taken away and becomes a political pawn. The rescue comes from AxysCorp, a megacompany owned by Nathan Lammockson. His philosophy includes “doing well by doing good,” and “looking out for number one.” Now you know about most of the “motivations” for the “characters.”

Right after their rescue, the flooding starts. Baxter starts to explain how the Earth could flood, and why, and how the characters are going to react to it. Each of them has a role to play. Gary is a climate scientist with NASA. He’s going to be a survivor, doing what he has to in order to keep going. He will explain to the rest of the cast what is going on, and will introduce them to Thandie Jones, another climate scientist who will roam the world recording the data of the inundation, and likewise explaining to people what’s going on. Helen’s only role is to impart to other people the goal of retrieving and protecting her baby. Gary will be a critical link in that chain. Lily is an ex-USAF pilot. She is the default viewpoint character. Her role is to stay as close to Nathan Lammackson as possible, so that we can see how a powerful, visionary, asshole industrialist will deal with the catastrophe. Lily’s other goal is to keep her family, which consists of her sister Amanda and Amanda’s two children, Kristie and Benj, alive. This doesn’t work so well, because Lily also sticks close to Piers, another hostage. His role is to stick close to Nathan, keep Lily close as well, and be wrong about lots of things. He is unaccountably attracted to Kristie, for no other purpose than to drive a wedge between Kristie and the rest of her family, so that we can get an outsider’s viewpoint on what Nathan is doing.

Gary will eventually find Grace. (With the help of a completely throw-away character named Michael, who for some reason abandons normal civil service to help Helen with her crusade, and is so attached to the quest that, once Grace is found, co-parents her with Gary for almost 10 years before dying in such a way as to illustrate the harshness of survival in post-flooding America. We never get any explanation for his motivations at all.) Anyway, Gary will spend 10 years parenting Grace, in fact walking with her (and many others) from Nebraska to the Andes Mountains, to get her to safety. After he hands Grace off, against her will and without discussing it with her, to Lily, he disappears for most of the rest of the book and never mentions Grace ever again. Ouch.

It becomes clear that the author’s purpose in making the characters hostages is two-fold: at the beginning of the book, people can explain how the world has changed to them, since they’ve been out of circulation for five years. That helps bring the audience up-to-date from our time to theirs. Then the hostages, having group loyalty to each other, have a built-in motivation to keep seeking one another out, relaying information to each other, and staying near the center of the action. However, none of the psychological consequences of prolonged captivity are dealt with in any coherent way, so it ends up seeming like a cheap trick to help the author when he needs to explain stuff to the readers.

I think the reason this bothered me so much was that these were characters that I really liked, and whom I wanted to know better. When Gary tossed Grace to Lily, hoping that somehow Lily would find a way to help Grace survive the turmoil, I really wanted to know how he felt about that. When Lily maneuvers Grace into a situation where she is treated (almost) worse than her mother was in captivity, all so that Grace can survive, I really wanted to know if Lily was aware of what she was doing, or if her blinders were that opaque. It’s an interesting question: how much suffering should you put someone through, against their will, if it’s “for their own good?” It’s not a question Baxter is terribly interested in.

So, what is Baxter interested in? He postulates one big change, the continual and accelerating flooding, and then extrapolates everything from there. Flooding coastlines, urban evacuations, disintegrating governments, rich folks trying to buy security, economies collapsing, raft cities, nomadic tribes, piracy, technological outposts, strong-man governments, indigenous unrest, high-tech solutions, low-tech solutions, cannibalism—you name it, he’s thought of it. In his future, the flooding is not caused by global warming (although it will exaggerate the climate change effects as well). It is caused by water trapped deep within the Earth being released—and as the weight of water on top of the crust increases, it forces even more water up, hence the acceleration. (This is ever so slightly plausible, based on current science.) He’s not content with just the rising water level, however. As the weight distribution over the crust changes, there will be earthquakes in places that never had them before (e.g. Ireland), causing devastating tsunamis. Some low-lying places will be protected for a time by mountain ranges, but when the water overtops them the flooding will reach there as well. All of this is absolutely fascinating, and I can see why he jerks the characters around like puppets so that he can show us all the dramatic things that would happen. It’s just not fair to the characters.

There’s a moral repercussion for changing the cause of the flooding. If the cause is global warming/climate change, then humanity is responsible for its own demise, and that carries with it its own sense of tragedy. However, Baxter never makes a link between anthropogenic climate change and the release of water from within the Earth. That implies that what’s happening isn’t our fault, it’s simply bad luck that may cause the human race to go extinct. I’m a bit worried in that it seems that Baxter is unaware of the changing moral implication. I’m sure that he avoided using global warming as the cause of the flood because current science says that no matter how bad global warming gets, there simply isn’t enough water on the surface to cover the planet completely. However, some of the characters towards the end of the book continue to imply that humans brought this upon themselves, even though it seems like the cause is something completely independent of human activity. It seems like Baxter is trying to have his cake and eat it too. I’m being harsh to a book that I really did enjoy, but this is the first hard sf book of its kind that I’ve read since the SF Masterclass, and I’m afraid it’s getting the full broadside.

Gary K. Wolfe, writing for Locus, has described Flood as “entry-level sf,” and I’m afraid he’s right. This is a very accessible and readable book. The concept is completely straight-forward: the world is flooding and there’s nothing we can do about it. What would happen? It’s easy to understand, easy to visualize, and easy to understand the consequences. There’s no high-level technobabble needed here. For people who have loved, or will love, the mainstream of science fiction literature, this is a great book and a great place to start. To some people, however, “entry level sf” may imply something to give your friend who always says, “I don’t like science fiction.” This is not the book to give to that friend. They probably want to read novels, with real characters, and this book would simply reinforce their stereotypes about sf. There are books and stories out there for that person—but Flood is not one of them. I think we need two categories of “entry level.” Perhaps we could call one the “Ender’s Entry Level”—books for people who should be sf fans, and just need a good place to get started. The other we could perhaps designate “Butler’s Entry Level” (please help me come up with a better name!)—the stuff, like Octavia Butler or Ursula Le Guin, to hand to your “I just don’t like sf” friend who enjoys reading novels. Genre literature is a big tent, and it has a place for all kinds. Flood is an excellent “Ender’s Entry Level” book—give it to your precocious 10-14 year old acquaintance and see how they like it. But it’s certainly not going to convince anyone who thinks that Middlemarch is the only true novel, that sf is worth reading.
Posted by Karen Burnham at 08:00