About Writing, by Samuel R. Delany 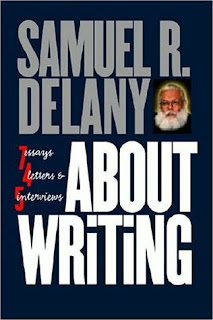 I've been writing reviews seriously for about 2 years now. I am better now than I was at the beginning, when I seemed to be aiming at the better sort of Amazon.com review. Now I aim for, and consistently fail to reach, the heights of Locus Magazine reviewing. Now that I have a couple years off from work (although I am assured that getting a Master's degree does NOT equal "not working"), I hope to focus on improving the quality of my writing. Recently as I was nigh-comatose, decompressing from the stress of my project-from-hell job, I picked up About Writing: 7 Essays, 4 Letters and 5 Interviews by Samuel R. Delany. It served two purposes for me: first it has very practical advice about good writing and how it differs from bad writing; second it re-inspired me to work hard to make my writing better.

Enough about me, this book is really about Samuel R. Delany. Any single-author collection is in a way about its author, fiction or non-fiction. Delany has been a noteworthy presence in the field for decades, and while there are biographies out there about him (most of which he isn't terribly happy with, he mentions), ultimately you get to know a writer through his writing. As much as I personally learned about writing from this book, I also learned about Delany. He's an intelligent and erudite man who cares deeply about writing and art. He's thought about these topics in depth, both their execution and how to teach them. He's thought about the craft of writing and its social context. He doesn't talk down to students, yet he doesn't bamboozle the reader with academic jargon. While he can match pretentious-sounding academic prose with the best of them when necessary, he is more often witty, readable, and to the point.

I'm ashamed to say that I haven't read any of Delany's fiction yet. It's always seemed a bit intimidating. Dhalgren has a formidable reputation. My excuse is that I've been filling in my science fiction history in generally chronological order - for instance I recently finished Moon Pool by A. Merritt, published in 1919. So I planned to get to Delany's books when I started to hit the New Wave period. I've already stocked up for it: I've got a copy of Dhalgren and also The Einstein Intersection. After being exposed to both his writing and his personality in this volume, I'm now eager to pick up his fiction. This collection shows his range: everything from the easily readable material aimed at proto-writers to complicated and erudite prose aimed at serious scholarly journals. He knows how to tailor his writing to his audience, and can sustain both styles of writing equally well. However, for myself as a proto-writer and also a proto-scholar, I found the simpler stuff much easier to digest.

To begin with, Delany covers the things that any beginning writer should know. This stuff is probably covered in the sorts of classes that most writers take, but my background is physics, and I never took those classes. Thus the incredibly basic rules of "good" writing (which Delany differentiates from "great" writing) were (too) eye-opening for me. While I knew some already ("Whenever reasonable, avoid the passive voice"), some I hadn't heard (or at least hadn't internalized) before:

(6) Omit unnecessary chunks of received language. "From our discussion so far it is clearly evident that..." If it's that evident, you needn't tell us. "Surely we can all understand that if ..." If we can, ditto. "In the course of our considerations up till now clearly we can all see that..." If it follows that clearly and we can all see it, we'll get the connection without your telling us we'll get it.

At which point I sat up and mentally exclaimed "So that's what I've been doing wrong!" Not all the time, but that is a particularly bad habit of mine. Later on he has a lengthy examination of the difference between oral language and written language, and why the best oral story-teller you ever heard probably can't write worth a damn. The way we hear things and the way we write them are fundamentally different. Simply transcribing spoken words, or reading written words verbatim, are not successful strategies.

The first sections of the book are meant for the sorts of students one finds at writing workshops. It's aimed at people writing fiction, but especially the advice about sentence-level writing applies to everyone. He emphasizes knowing the basics: grammar and punctuation. One can't be great without being good first. He points out that teachers can only really help with the "good" aspect of writing, that is, avoiding bad writing. To get the next level of "great" writing requires things that can't really be taught. However, he suggests reading as many great writers as you can, so that at least you'll recognize great writing when you see it. He points out that the best education you can get in writing can be had cheaply: simply pick up the books of great writers and read. You don't have to wait for the best teachers, since they're all waiting for you at Barnes & Noble.

In the other essays, most shorter than the Introduction, he describes his experiences both with writing his own work and teaching other writers. There are accounts of interesting exercises at a Clarion workshop, a stream-of-consciousness example of the internal editing process that goes into writing a scene (what gets put on the page and what stays in the writer's head), different methods of characterization, the three easily teachable rules for writing he's found (from Theodore Sturgeon: don't overwrite; from Thomas Disch: don't let your writing become thin or superficial; from himself: don't indulge cliches), a very detailed and interesting critique of a fiction submission printed in a fanzine, and explanations of narrative structure and its importance. Everything in the "Essay" section is filled with useful advice for writers. Not all of it will be useful for every writer (for instance I'm not terribly concerned with characterization), but there will be something new or useful for everyone.

The next section includes four letters, each to an anonymous recipient. One talks about genius and talent in writing, how it relates to the writing marketplace and how it relates to art. Another has an extended critique of Toni Morrison's The Bluest Eye, especially from Delany's perspective as a black man. He argues with its moral prescriptions, its aesthetics, its sense of place and time, and its characters. It is fascinating to read as a critic, to look at what points Delany chooses to critique and how he makes his points. It's an extended example of some of the best reviewing/criticism I've read: he's writing to a friend, so he makes all his points using clear, informal language, while also being forcefully opinionated but not insulting to Morrison.

The third letter is to a neophyte author who has written him for advice. It has to do with building a literary reputation. Delany talks about his own experience as a writer, where writing takes precedence over every other thing in his life. Writing, he points out, is a lot of hard work. He goes on to talk about generating literary markers. Some of these come from writing the very highest possible quality of prose. Others come from being involved in the literary community, being talked about. If you're very lucky, people will write articles about you, perhaps even a biography. However, the only thing the writer can actually control to any real degree is the quality of the words. This is probably not what the correspondent wanted to hear, but it is good advice. Another aspiring writer also comes in for some harsh but needed advice in the last letter. Writers need to keep writing new things, not continually reworking old things.

I found less of immediate interest in the Interviews section. This is partly because several of the pieces are written in a more formal academic style, and partly because I am not yet involved in the heights of literary theory in which these discussions take place. He is deep into the conversation that society has about literature, but I felt that I didn't have enough background to really see what points he was arguing with - I was only getting his side of the conversation. I suspect that in a few years I'll re-read these pieces and get more out of them.

Did the literary universe need another book on writing? Probably not. There are many other volumes that I've seen recommended to new writers, for instance Stephen King's On Writing, not to mention any number of online sites and blogs. One could also argue that the market for non-fiction about science fiction, small as it is, is also full. Delany himself has written several other volumes of non-fiction related to his various fields of interest, from sf to erotica (several of which I've now added to my must-read list). However, the combination of writing guide, intelligent and informal literary analysis, good advice, and warm personality contained in this volume add up to a valuable addition to that market. Particularly for new writers and the new critics, which population seems to be growing steadily, this collection of wisdom will be particularly beneficial.
Posted by Karen Burnham at 16:49